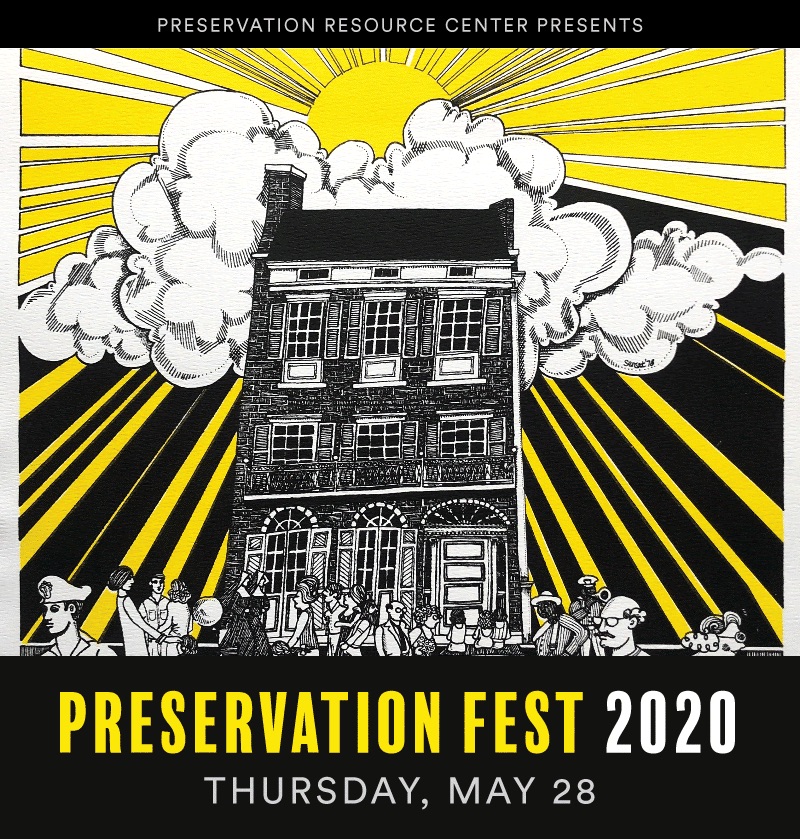 Join PRC for Preservation Fest 2020, a day filled with fun, informative and thought-provoking (free!) online programs, highlighting historic preservation achievements in New Orleans. This virtual festival covers much ground, offering a sneak peek into noteworthy renovations, chats with a master craftsman, a virtual neighborhood walking tour and more. Tune into one or all of these programs for free from the comfort of your couch, and join the discussions to share your thoughts on preservation as this city emerges from a historic pandemic. In a nod to PRC’s founders, Preservation Fest 2020 is inspired by the 1978 Heritage and Horizons Festival hosted by the Preservation Resource Center. (Tune into PRC’s social media for giveaways of the authentic — and super groovy — 1978 festival posters.) Then, as now, historic preservation is a powerful tool for economic development and neighborhood revitalization, creating jobs and tax revenue when we need it most.

Join us on Facebook live at facebook.com/prcno to tune in to the Preservation Fest programs!

Preservation issues — learning from the past, guiding the future

Join PRC Executive Director Danielle Del Sol for coffee and conversation with Jack Davis, an acclaimed writer, editor, publisher and former board member of the National Trust for Historic Preservation and the Congress of New Urbanism. Jack and Danielle will discuss how past lessons will guide the future of preservation.

Fifth generation master plasterer Jeff Poree takes us on a virtual tour of his Mid-City workshop and discusses the art of plaster casting.

Christian Pendelton, general manager of Brennan’s Restaurant, shares the history of this renowned French Quarter restaurant and the efforts to restore and preserve its building at 417 Royal St. He then gets us fired up with a demonstration of one of New Orleans’ most famous desserts.

Take a virtual tour of the historic former dormitory and dining hall of Straight University, one of the first African-American universities in Louisiana. The Preservation Resource Center saved this important structure from falling down on Claiborne Avenue, restoring the building in an extensive renovation. Aulston Taylor, a PRC board member and owner of a condo in the Straight University building, will lead this discussion.

Built circa 1867, just two years after the Civil War, the stately St. Francis de Sales Church served as a Catholic church parish until 2008, when it was sold by the Archdiocese of New Orleans and deconsecrated. The wooden church building remained vacant for nine years and fell into disrepair before developer Peter Gardner purchased it in 2017 and commenced an extensive restoration. Take a virtual tour of the property with Peter and hear from Monsignor John Cisewski, who served the congregation in the 1970s and ’80s.

In praise of the Pythian

The rich, storied history of the Pythian was masked — literally — for decades. A mid-century modern sheath covered the 1909 building underneath. When local development firm Green Coast Enterprises decided to renovate the structure into a mixed-use building, its first step was to uncover the hidden gem. The metal sheathing came off, and the building’s beautiful brick façade shone once more for New Orleanians to enjoy. Will Bradshaw of Green Coast Enterprises will lead a virtual tour of the property that now is home to a food hall, health care and business offices and apartments.

Exploring the renovation of McDonogh 30

Take a virtual tour of the renovated former McDonogh 30 school building with its developer Gordon McLeod, vice president of the Preservation Resource Center’s Board of Directors. Built in 1894 for McDonogh 30, and later used as the WYLD radio station studio, the site had been abandoned for nearly 20 years and had sustained hurricane damage before Gordon took on the task of restoring the building and its eclectic mix of late Victorian-era architectural styles. It has now been converted for residential use

Sprucing up with textiles

Wallpaper and textiles are fresh ways to add texture, color and style to any space. Join the PRC on a virtual tour of the Magazine Street design studio Spruce and learn how to use fabric and wallpaper in new creative ways with Spruce’s owner — and former PRC staff member — Nomita Joshi-Gupta, a creative leader in wallpaper, fabric and environmentally friendly design.

The Dreamsicle Flip and other forgotten treasures

Erika and Robert Gates have been collecting vintage items and furniture since they first met. Erika, a preservation consultant with Gates Preservation, and Robert, a preparator with The Historic New Orleans Collection, will share some of their favorites from their circa-1924 Garden District home while mixing up a vintage cocktail recipe called The Dreamsicle Flip.

Join us on Instagram live – @prcnola — to tune in to the following lagniappe programs:

Watch the sun come up and the city come alive from a private rooftop balcony in this former rope factory that served as a pavilion during the 1984 World’s Fair and then was converted into residential condos.

Beams and Beats with DJ Preservation

Dance in your living room as DJ Preservation spins from the rooftop balcony at Gris-Gris restaurant overlooking Magazine Street.

This year’s Annual Meeting will celebrate the achievements of the Preservation Resource Center and highlight the history of the Faubourg Treme neighborhood with a virtual tour of St. Augustine Church, including the Tomb of the Unknown Slave. The online meeting will include a welcome to Treme by Naydja and Adolph Bynum, seasoned renovators, preservationists and neighborhood leaders, who will toast our gathering from their Creole Cottage, which received the 2002 New Orleans Historic District Landmarks Commission’s Honor for New Construction. The meeting also will include remarks by PRC Executive Director Danielle Del Sol on the organization’s accomplishments during the past 12 months, including the PRC’s work during the COVID 19 crisis, the election of new PRC officers and the passing of the presidency from Jeanne Harang Boughton to Gordon McLeod. The evening will conclude with a guided virtual tour of the church by St. Augustine parish secretary Linda Harris and church historian Monique Aziz. This event is open to PRC members only; RSVP is required, and members will need to log-in through Zoom to vote on the PRC’s new board members. Learn more & RSVP.