Even before the Covid-19 pandemic gripped the globe, 2020 had already opened with an eventful start in New Orleans. The new year began with City Hall hobbled by a December cyber attack that would take months to untangle. Also, the hulking remains of the incomplete Hard Rock Hotel still loomed over the corner of Canal and Rampart streets after its deadly partial collapse in October 2019. Then, on the heels of a Carnival season marred by deadly collisions, came a pandemic-induced lockdown.

New Orleans soon found itself at the center of Louisiana’s COVID-19 response. By summer, as the outbreak began to ebb, both the city and state recognized the tremendous implications of a “new normal” without conventions, festivals and tourists — or the tax dollars they provide.

Meanwhile, the construction sector came roaring back, buoyed by low interest rates and demand from families now working and schooling from home, a change that inspired thousands of people to remodel.

Through it all, PRC has remained a vigilant watchdog for New Orleans’ unique cultural assets and consistent advocate for the economic and social benefits of preservation. Here’s a look back at some of the biggest advocacy issues during 2020. 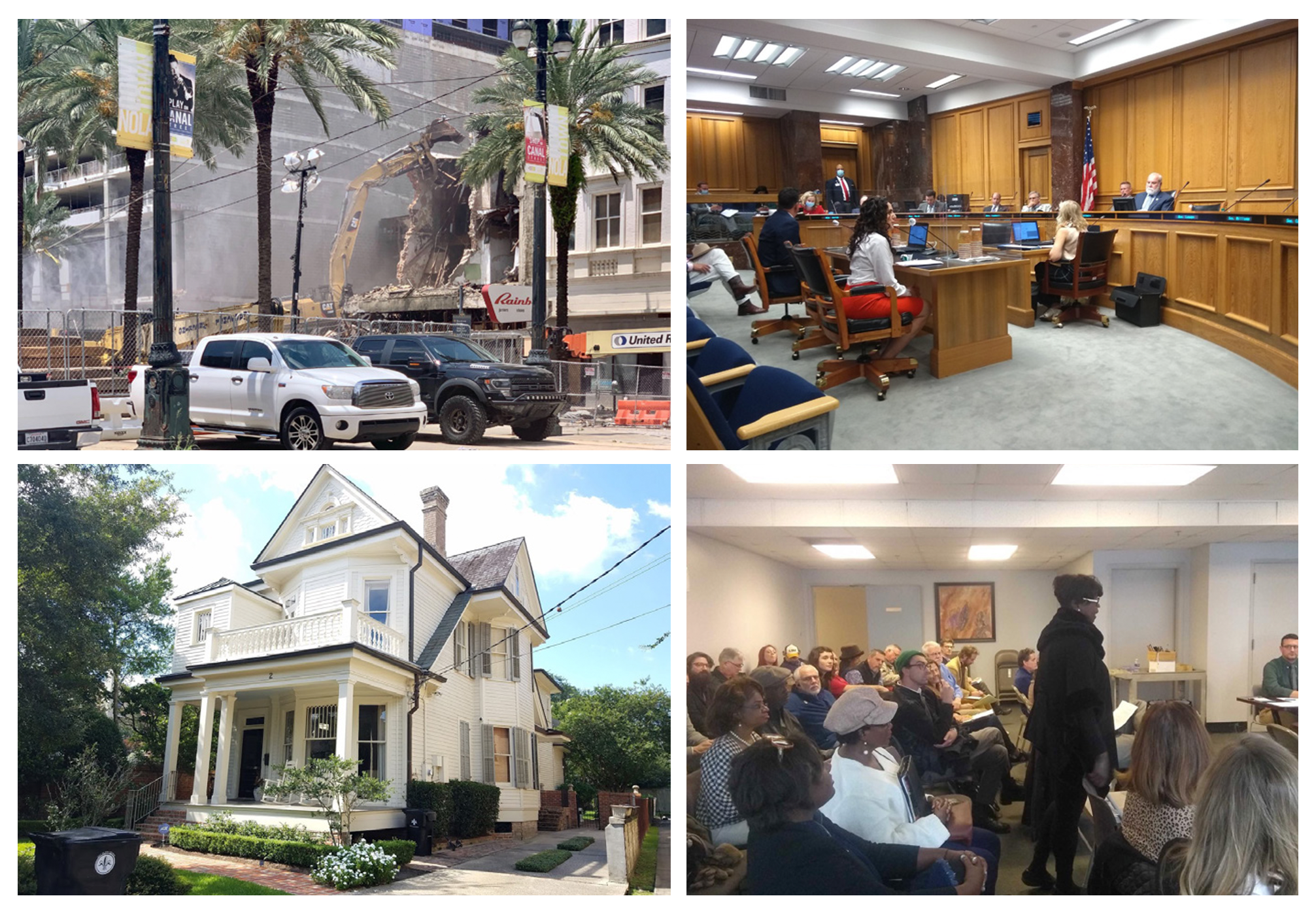 • As 2020 draws to a close, the ongoing demolition of the Hard Rock Hotel at 1031 Canal St. remains a grim reminder of the three lives lost when upper floors collapsed on Oct. 12, 2019. The city administration wrangled with developers, led by Mohan Kailas, over the safest means to recover the workers’ remains and demolish the failed structure until finally reaching agreement on April 30. Heaslip Engineering and Citadel Builders were among the 11 firms cited for safety violations by the Occupational Safety and Health Administration of the U.S. Department of Labor, but building inspectors with the New Orleans Department of Safety and Permits also came under fire for signing off on the hotel construction as work progressed.

Upon learning that the demolition plan for the collapsed hotel called for the additional demolition of adjacent buildings on Canal Street, PRC called attention to those neighboring structures’ historic significance. Though heavily altered, two of three dated to the 19th century and were once home to a silent film theater and department stores. In a complex and compounding tragedy, engineers and the fire department superintendent deemed the removal of the additional buildings necessary. Permission was granted in May under the city administration’s emergency powers. PRC has called for a redevelopment plan for the Hard Rock site that honors the historic setting and benefits the public.

• The extraordinary circumstances of 2020 presented PRC and its allies with an unforeseen opportunity when Gov. John Bel Edwards called in June for a special session of the Louisiana Legislature. The move opened the door for lawmakers to consider reauthorization of the state’s Commercial Rehabilitation Tax Credit, often called the state historic tax credit, which was set to expire in 2021. Rep. Tanner Magee introduced the legislation, and PRC contributed fact sheets so lawmakers could see how their districts or parishes benefited from the program, which is responsible for $4 billion invested in existing commercial buildings since 2002. The program also makes a significant contribution to affordable and senior housing. PRC Executive Director Danielle Del Sol was among those who testified about these benefits before a state senate committee. Lawmakers recognized the tax credit’s cultural and economic benefits, but a few voiced concern about declining state tax revenues. Ultimately, the program was capped at $125 million annually, an amount sufficient to allow historic tax credit rehabilitations to continue but also provide certainty when devising the state budget.

• With the state historic tax credit renewed through 2026, PRC returned its attention to helping New Orleans neighborhoods take advantage of the incentive. The state historic tax credit program is only available to property owners located in Downtown Development Districts and Louisiana Cultural Districts. Cultural Districts also provide a local sales tax exemption on original artwork. This year, the Touro-Bouligny Neighborhood Association in City Council District B and a coalition of 7th Ward stakeholders in City Council District D reached out to PRC for help gaining Cultural District status for their communities. PRC worked closely with the residents, and in October, the good news was announced. The state has named the A.P Tureaud-7th Ward and Touro-Bouligny as new Louisiana Cultural Districts.

• A similar commitment to equity in the preservation and recognition of historic places fueled PRC’s work alongside the Pontchartrain Park Neighborhood Association. The culmination of years of effort came in June when the Pontchartrain Park Historic District was added to the National Register of Historic Places. PRC is grateful for significant assistance from the Louisiana Division of Historic Preservation.

• Watchdogging demolition permits in New Orleans historic districts remains a cornerstone of PRC’s advocacy work. Protecting the unique character of older neighborhoods requires the fair application of ordinances intended to preserve historic buildings. However, each case is unique. The case of two residences on Cromwell Place was more clear-cut than most. To make way for a new house, the owners of 2 Cromwell Place, a single-family home, and 4-6 Cromwell Place, a duplex, proposed to demolish both structures, which had been deemed by the city to be in good condition. The PRC shared news about the demolition request, which generated a torrent of public opposition. The HDLC denied the demolition permit, and after further consideration, the owners opted to withdraw an appeal to the City Council, saving the two residences from demolition. A house at 465 Audubon St. wasn’t so lucky. After receiving a partial demolition permit last year to relocate the house on its lot and remove a later addition, the owners were back before the HDLC in September requesting a complete demolition. The commission denied it, but the City Council acquiesced on grounds that the move had damaged the building. The council did require the owners to do extensive salvage of windows, moldings and flooring. Most recently, the council sided with the PRC and upheld a denial of demolition for a home at 1230 Webster St.

• Also of note, the City Council this fall revised ordinances governing Neighborhood Conservation Districts, an area roughly south of Interstate 610. The changes replace an advisory committee composed of city staff and appointed community members with an internal review process intended to speed permitting. Properties on or eligible for the National Register of Historic Places will require a City Council hearing, while those not appearing on 1983 Sanborn maps will not. PRC will monitor the implementation and continue offering property owners and council members information on alternatives to demolition.