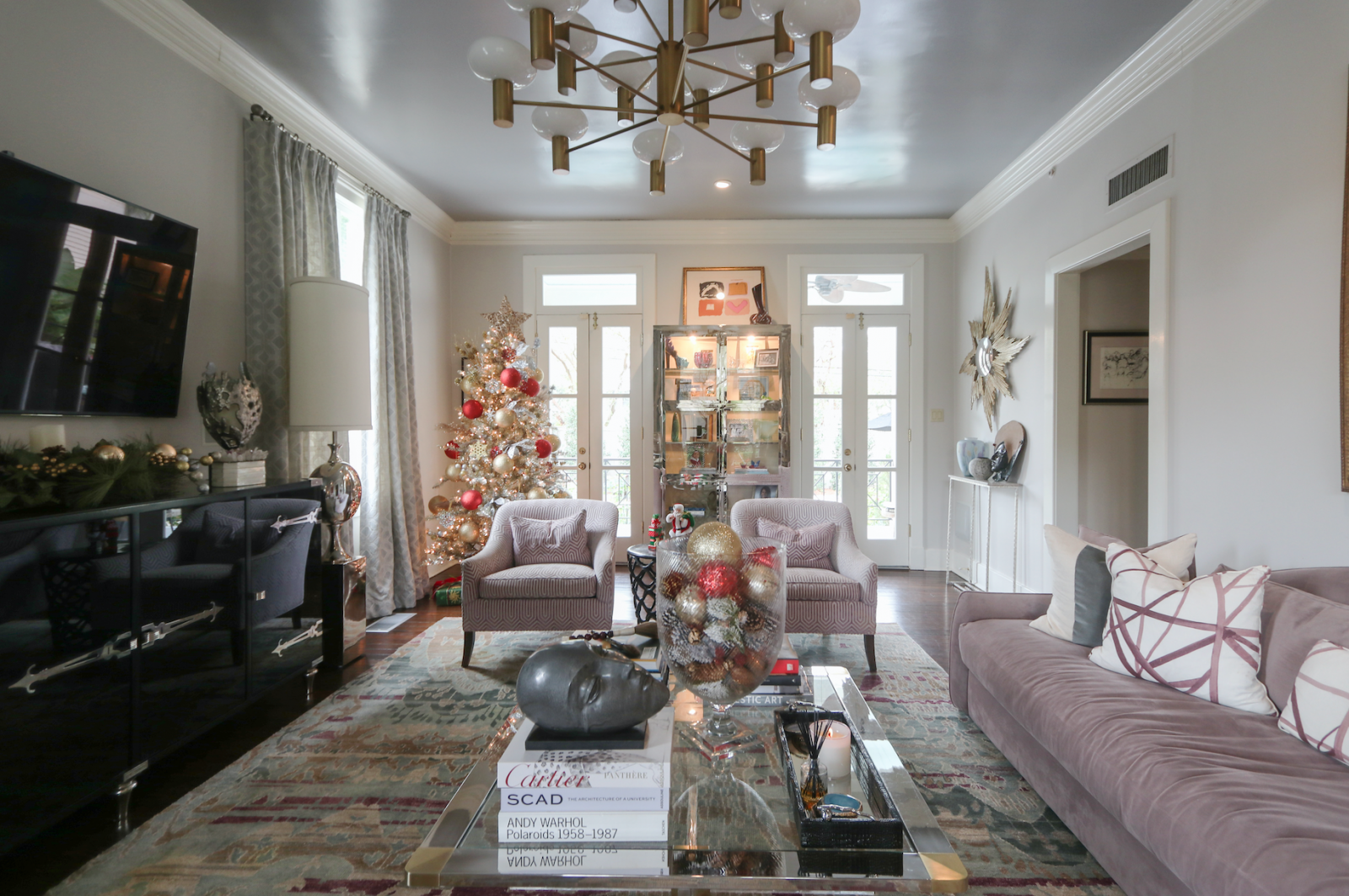 During their 2012 house hunt, Penny and Todd Francis jokingly made a bet about one necessary requirement.

Todd was “adamant about finding a property with a garage,” said Penny, who told him she didn’t think one existed where they were searching. “He said, ‘I bet you a thousand dollars I’m going to find one.’”

Less than a week later, he did: a stately Colonial Revival home tucked onto a quiet street near Audubon Park. Not only did it come with a coveted garage, the home was full of character and original architectural details, including louvered shutters for the two-over-two pane windows, a fanlight transom over the front door, a porch with square columns, and a second-story covered balcony overlooking the front yard.

The 95-year-old home’s entrance doesn’t face the street. It was built to face the park before other houses around it were constructed, Penny said. Both the porch and the house’s placement were appealing to the couple, as was the lot’s generous size. It was created when the previous owners, who’d lived there for 40 years, bought the adjacent corner property in the 1970s and built an addition.

The 5,000-square-foot house gave the couple and their two daughters, Casi and Camryn, lots of room. Yet, there was so much work to be done to update the house, it initially gave Penny pause about purchasing.

“When we came to see it, Todd fell in love with it immediately. I did not,” said Penny, owner and principal interior designer of Eclectic Home on Oak Street. But the light streaming in through the formal living room’s oversized 12-pane window won her over. She could envision comfortable spaces where her family could relax and entertain.

“We first looked at function then design. I let the house speak to me to help guide the design direction,” Penny said.

Working with general contractor Bill Finley, LLC, the couple undertook a year-long renovation that included updates indoors and out. “It was easy for me to make a few changes on how the house flowed, but what I didn’t want to do was make it an open floor plan,” Penny said. “As a designer, I know open floor plans are sort of a big thing, but I like individual spaces that stand alone. I like spaces that have their own design identity while at the same time being cohesive. There are things that are subtly repeated from room to room.”

The foyer gives the first sign of the home’s complete transformation. While the only structural renovation in this space was the elimination of a small opening to the den, there were plenty of stylistic additions.

A mirrored wall on one side opens up the petite space. It reflects light from the laser-cut brass pendant light — one of the home’s many eye-catching fixtures — as well as the shimmery grass cloth wallpaper from Thibaut. The wallpaper covers the original stairwell, where a collection of round antique mirrors further create the illusion of space.

Penny finished the foyer, which separates the living and dining rooms, with a black metal bench and a soothing green-hued Mallory Page painting. A favorite black-and-white photograph by New Orleans photographer Meryt Harding casually sits on the nearby console.

“The Engagement,” a large-scale painting by Kennith Humphrey that the couple purchased from the Stella Jones Gallery, served as the inspiration for the living room, where Penny added two sets of French doors, which open to a new rear porch.

Different shades of lavender, a secondary color in the vibrant painting, cover the walls and ceiling, as well as the curved-back Italian sofa. There are hints of the color, as well, in the hand-tufted Nourison rug. Black accents – another color in the painting along with its dominant red hues – can be seen in some of the room’s furniture and accessories. 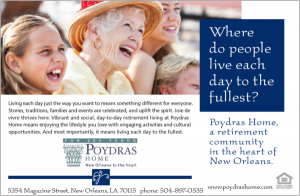 “When you take the least dominant color, and you pull it out into some of your textiles and interiors, then you start to pay attention to it,” Penny said.

Lavender is repeated in the upholstery of the Gustavian chairs at the round Neoclassic table in the dining room, whose 12-pane bay window is a favorite architectural feature. The room is a mix of styles; there’s also mid-century and Chinoiserie-inspired cabinets, a sign of Penny’s mastery of diversity in design.

Because the dining room is an intimate space with a traffic pattern between the kitchen and living room, Penny drew attention to its back wall, covering it in Schumacher’s Acanthus Stripe, a hand-painted grass cloth wallpaper. To emphasize the importance of repeating design elements, the curves of the center-hung mirror are picked up in the brass sconces, the chandelier and the chinoiserie cabinet’s trim.

Penny filled the room with treasured pieces. There are the two carved-wood building plaques from Florence, Italy, that feature acanthus leaves sprouting from an imposing figurehead, along with swags and scrolls connecting it to two other faces. They once belonged to a retired antiques dealer Penny befriended not long after she’d opened Eclectic Home in 2000.

“She would come to the shop and sit and talk. I’ve always been obsessed with furniture since I was a child, and I loved talking to her because she was a walking history book,” said Penny, adding that one late fall afternoon she gave the woman a ride home and was invited inside. She noticed the matching plaques among a trove of beautiful pieces, and a week later, they arrived at Eclectic Home as a gift.

“They are so special to me,” she said.

Among other treasured pieces are the glass decanters proudly displayed on the dining room’s French sideboard. The decanters belonged to Penny’s grandparents. When she was growing up, she always asked to use the two pieces – one from the early 19th century, the other featuring Depression glass — during dinners. Her grandfather refused the request, but gave them to her before he passed away.

“He said, ‘I just want you to know, those are yours,’” she recalled. “‘You’ve been asking me about them since you were 7 years old.’”

The home’s kitchen – where Penny spends Sunday mornings cooking and listening to jazz — got the most dramatic change. “I adore my kitchen,” she said. “I’m a creative person, and when I’m not designing, I love to cook.”

She kept the original door to the dining room and the galley layout, but lengthened the kitchen and raised the ceilings to match the other rooms’ 10-foot heights. She also eliminated a wall separating the kitchen and breakfast area, and converted a built-in desk to a serving station. Where a window was taken out, Penny hung a vibrant painting of a single green apple by pop artist Gardani.

Modern, three-pane French doors were added to the breakfast area’s side wall, opening the space to the new rear porch. “Once we opened this up, we really loved how we could continue to live inside and outside. It flows,” Penny said.

The porch addition overlooks the new saltwater pool and spa, intentionally L-shaped like the house. Reed and Chad Richardson with Gulf Coast Pools helped the couple achieve the design, while Kim Alvarez with Landscape Images created lush landscaping around it. 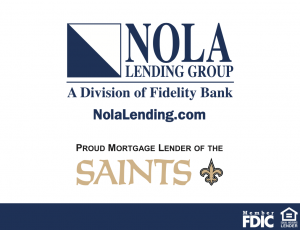 The goal of the renovation, Penny said, was to create a home where every space is lived in. “My grandmother had rooms you could only look at … but you couldn’t touch and you couldn’t sit in because the things (in them) were old and fragile or sentimental,” she said. “I always knew one day I wanted to live in every room in my house.”

The den, which sits between the kitchen and living room, is where the family “spends a tremendous amount of time,” she said. “Even though it’s in the middle of all these spaces, architecturally it stands alone, which allowed us to play with some color here.”

A moody blue hue covers the walls, with coordinating wallpaper on the ceiling. Penny kept the warm wood tones of the existing built-in bookcases while incorporating a mix of mid-century furniture, including a Milo Baughman sofa. The room also features more of the couple’s art collection, including pieces from their travels and by New Orleans artist Gavin Jones.

Even with its many changes, the renovation preserved the house’s existing character and made it part of the Francis family’s story. “It’s been a labor of love,” she said. 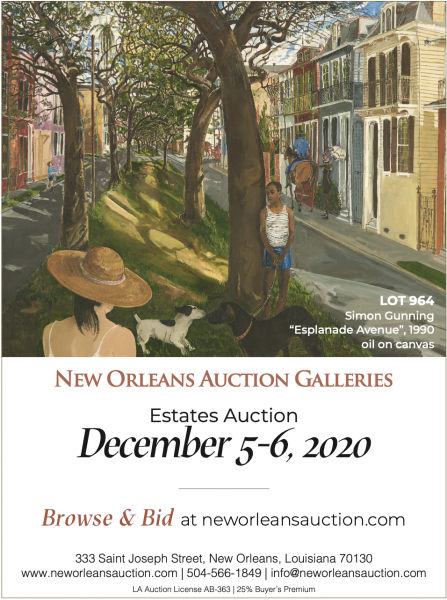