The Pontalba Buildings are the oldest apartment buildings in the United States.

The Pontalba Buildings often are cited as the oldest apartment buildings in the country. Even Truman Capote in “Hidden Gardens” described them as “the oldest, in some ways most somberly elegant, apartment house in America.” But the buildings were built as row houses, not apartments, for the Baroness Pontalba. Row houses were introduced into New Orleans architecture during the 1820s.

The Pontalbas are a series of units each with a shop on the ground floor and a single residential unit above. It was not until the Works Progress Administration during the Great Depression that each row house was carved up into apartments.

The Baroness’ original plans called for a façade over the sidewalk and a mansard roof to mask her father’s property lining the square. Likely the architect for this project was the architect of her Parisian home, Visconti, known for his Second Empire design. The plans were to make the square look like the Palais Royal. That is why mansard roofs were added to the Cabildo and Presbytere to harmonize with her plans. 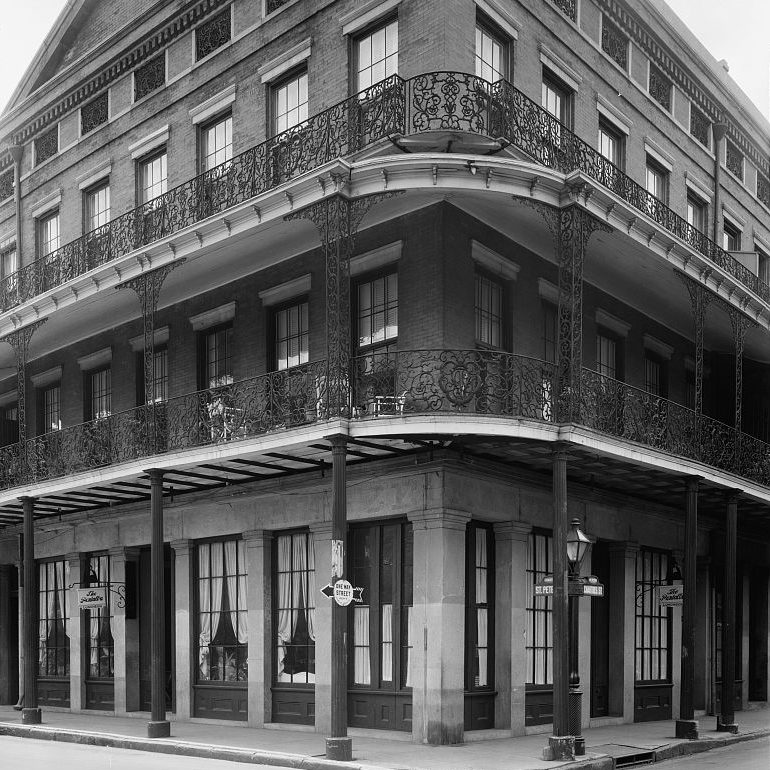 Plans for the Pontalba Buildings were first prepared by architect James Gallier in 1849. Later that year, the Baroness and Gallier had a disagreement with the engaged builder Samuel Stewart. Architect Henry Howard made subsequent drawings for the buildings. Disputes between the contractor and owner resulted in a lawsuit, which provides great details about the buildings construction.

The Upper Pontalba was completed in 1850, and the Lower, the following year. The decorative verandahs on the buildings were among the earliest in New Orleans and were made very fashionable. Many buildings in the Quarter subsequently had them added.

Initially the building had desirable tenants. The Baroness lived in one of the row house in the Upper Pontalba. Legend says she had the statue of Andrew Jackson tipping his hat to her. The same statue is found in other locations in the country including in front of the White House. The statue in New Orleans was erected in 1856.

In 1866, the Daily Picayune noted that the buildings were unoccupied as the Quarter began its decline. After the Baroness’s death in 1874, the building went into decline and became slums. During the city’s last yellow fever epidemic in 1905, a health official found a full-grown cow in one of the upper rooms.

In 1921, William Irby purchase the Lower Pontalba and gave it to the Louisiana State Museum, and, in 1930, the Upper Pontalba was donated to the city by a group of New Orleanians.