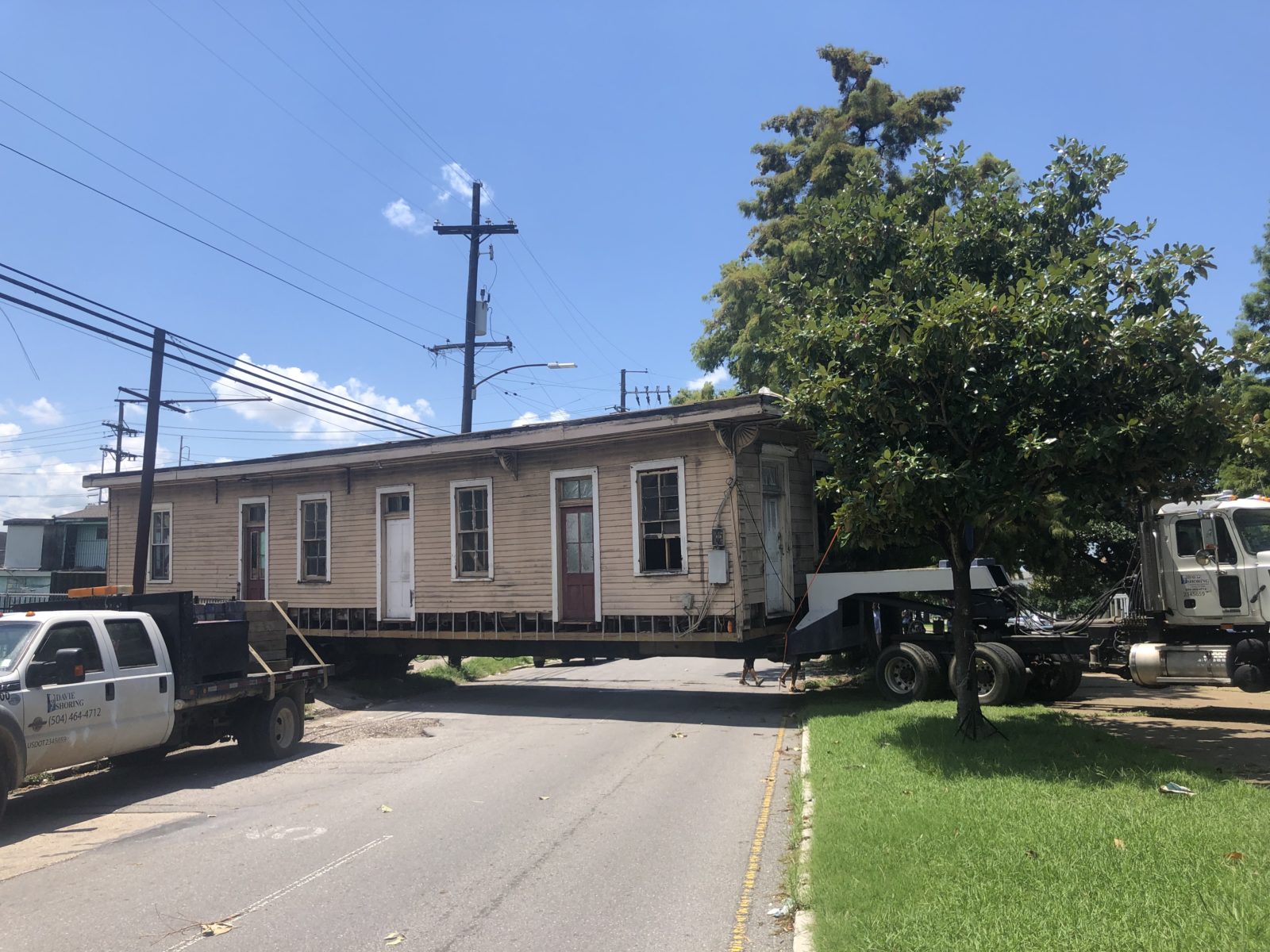 On an unusually cool Wednesday afternoon in July, New Orleanians gathered beneath the shade trees on the neutral ground of Martin Luther King Jr. Boulevard to enjoy a brief respite from the summer heat and to witness a rare sight – a 124-year-old house moved off of its original location and hauled down the street to a new site by truck.

Originally located behind the Leidenheimer Baking Company in Central City, the circa 1895 shotgun house made a four-mile journey today to its new location in the St Roch neighborhood, where it will be rehabilitated by Thrive New Orleans – a local nonprofit dedicated to workforce development and affordable housing – and sold as affordable housing. Davie Shoring donated relocation services for the four-room, 63-foot-long house.

When the operators of Leidenheimer decided to expand its operations in 2017, they realized the shotgun house on the company’s property needed to be moved. Instead of opting for demolition, Leidenheimer approached the Preservation Resource Center for assistance in saving the historic structure. PRC’s former Advocacy Coordinator Erin Holmes and former Operation Comeback Director Becky Gipson helped coordinate the effort, and found an organization that would be able to recycle the historic home.

Thrive New Orleans, which owned an empty lot in the St. Roch neighborhood, stepped up to the plate. Once the house is secured on its new site, the organization will renovate and sell the house to a moderate-income family earning up to 120 percent of the metro area median income. In an effort to help stabilize the neighborhood, Thrive New Orleans’ efforts will focus on teachers, nurses and first responders as potential buyers.

“As a New Orleans native, I have a deep-rooted appreciation for our city’s neighborhoods and unique architectural style,” said Sandy Whann, President of Leidenheimer Baking Company. “To me, they are at the core of what makes our city so livable.”

“The PRC made my decision to donate the house rather than demolish it an easy one, as they did most of the heavy lifting,” Whann said. “They found the right partners and contractors to safely move the structure to the new site, and it is a good feeling knowing that together we preserved a part of our city’s past. This is an outstanding example of business and preservation working hand in hand to accomplish a common goal and to keep our city moving forward.”

The structure has an unusual design for a shotgun house. It likely was built as accommodations for workers as it has a series of entrances along one side. Many of its historic elements remain intact, including an uncharacteristic row of brackets along a side overhang and on the front overhang. There are two original mantels and intact interior transom windows.

Moving a house is not easy. In this case, the process has taken more than a year, including permitting for the removal of the structure from its existing location, coordinating with utility companies for lifting overhead lines, placing the structure on a new foundation and then completing a full renovation.

“Homeownership that transforms a community goes beyond just owning a home,” said Chuck Morse, Executive Director of Thrive New Orleans. “Transformative homeownership entails pride of belonging for families living there. The collaborative efforts of the PRC, the Leidenheimer Baking Company, Davie Shoring and Thrive New Orleans are creating an opportunity for transformative homeownership by preserving the character of the St. Roch neighborhood and creating an affordable and beautiful home that a family will be truly proud of.”

“At PRC, we pride ourselves on helping owners find solutions to complicated situations,” said PRC Executive Director Danielle Del Sol. “We work hard to save as much of the historic fabric of this city as possible to serve future generations.”

The circa 1895 shotgun house was moved to the St. Roch neighborhood where it will be rehabilitated into affordable housing by Thrive New Orleans. Photos by Davis Allen.