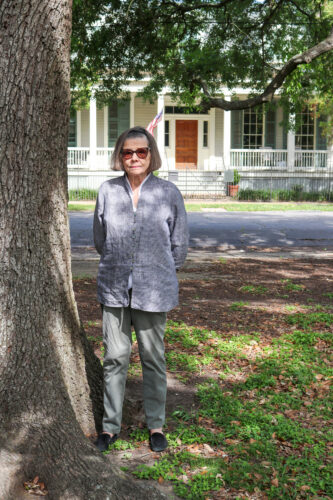 Attorney & board member of Felicity Redevelopment

What do you think is the biggest historic preservation issue in New Orleans today?

History, however messy, is a part of the fabric of New Orleans with its architecture, unique culture and people. Today, as history is being engaged in new and crucial ways, we need to ensure that preservation is a part of the conversation. Respect for and inclusion of all of the voices of this incredible city are big elements in doing that.

Just as it has been for more than 300 years, it’s a challenge to call out one manmade or natural threat among all those faced by an old, diverse, strong-opinioned, economically challenged city. The good news is that the basics of addressing problems are the same. It comes down to passionate individuals and organizations willing to take a well-informed stand, put in hard work, and make a difference.

You have done so much incredible work to rehabilitate blighted buildings, particularly houses with Felicity Redevelopment. Yet, blight remains a seemingly intractable problem in this city, which also has a great need for more affordable housing. What could the city do to better tackle blight and affordable housing today?

There are four things to mention. First, the city’s Code Enforcement Department has a Blight Initiative and established the “Mow to Own Vacant Lots” program. Its page on NOLA.gov lists some 2,500 addresses arranged by neighborhood and has instructions for reporting blight and for adjacent property owners to participate in the Mow to Own program.

Second, since the city’s usual remedy for a blighted structure is demolition, private citizens and volunteer organization, like the PRC and Felicity Redevelopment, have stepped up. There are examples citywide, but Felicity is the one I know best. It came about in 1998 in response to a proposed big box store on Felicity Street just off St. Charles Avenue, which would demolish more than 10 houses. It began with Central City residents, like Jeanette Bell and Aurora Castro Knox, and preservationists Louise Martin and Bill Borah.

Bringing its slogan, “Putting the Neighbor back in Neighborhood,” into practice, its revolving fund has produced/protected more than 50 affordable historic houses in the area, utilizing a variety of tactics. Depending on the challenge, Felicity relocated, deconstructed and rebuilt, made grants to stabilize owner-occupied homes, and acquired blighted structures for remediation and resale, mostly to first-time homebuyers. It also has acquired lots at city tax sales and resold them for architecturally sensitive residential redevelopment and neighborhood services, which replenish its capacity to continue.

Third, the New Orleans inventory of historic structures has attracted adaptive reuses, aided by federal and state Historic Rehabilitation and New Market tax credits. The National Trust Community Investment Corporation has syndicated tax credit investments for almost $100 million in total costs for New Orleans buildings. By combining housing, workspace, and access to a variety of services close at hand, the projects have strengthened neighborhoods. In a federally deemed “medically underserved” part of downtown, the adaptive reuse of the Pythian, one of the first African American-owned commercial structures in the U.S., generated 50 construction jobs to produce housing and other amenities including a food hall. The tenants have created 80 new jobs; the food hall is 60 percent women-owned or minority women controlled.

Lastly, there is an open question: Are short-term rentals a net positive for the city? On the plus side, STRs elevate the appeal of our housing stock and empty lots to many investors, both local and national/international. Also, there is no question that visitors are introduced to a broader array of our historic neighborhoods and the amazing culture and way of life here. Many decide to make New Orleans home. On the other hand, if our culture bearers are forced out by rising prices, who will want to come to a place that has driven away the people who make it New Orleans?

Our challenge is to find a balance to make STRs an asset to strengthen neighborhoods, not to look the other way allowing their negatives to go unchecked and overrun neighborhoods. Hard to grasp that it has been about 50 years since, along with others, Martha Ann Samuel, Louis Costa, Duncan and I realized that a Lower Garden District neighborhood organization was necessary. Long before Lydia Schmalz advocated tirelessly for the removal of the Camp Street ramp, we had to deal with the Louisiana State Highway’s announcement that Felicity Street, the cobblestoned midline of the neighborhood, would be the East bank end/access for a new Mississippi River Bridge.

We could see the effects of the first bridge on the downtown edges of the Lower Garden District and Central City and were well aware of the “Second Battle of New Orleans” led by Dick Baumbach and Bill Borah against the Riverfront Expressway in the French Quarter. The new bridge proposal got our rapt attention and that of Oretha Castle Haley and Dorothy Mae Taylor in Central City. It took some doing and a march to a meeting at the Roosevelt Hotel, which led to Gov. Edwin Edwards inviting us to join the session. Later the Highway Department modified its plans, which included the removal of the Camp Street ramp.

With the efforts of those who came early and those who have kept coming, including the PRC’s Operation Comeback, the whole of the Lower Garden District is on the National Register of Historic Places and is a local historic district. It is full of lived-in architectural gems, and Magazine Street is an urban revitalization success story, with shops on the first floor and apartments above.

You and your family have been actively involved in historic preservation in New Orleans for decades, starting when your children were young. What inspired you to get involved with preservation work and how do we motivate the next generation of preservationists to get inspired and involved?

Duncan’s family was a lodestar based on experience from the mid-1930s in the then disinvested Garden District and Magazine Street between Jackson and Louisiana avenues. Our six children were a captive audience to what evolved in the Lower Garden District, and, as such, they are much better equipped to answer for the next generation.

What I can offer is that New Orleans has one of the highest percentages of multi-generational families in the United States. There are few places in which successive generations can experience the life, food, buildings, whole neighborhoods and cemeteries, all with personal connections. New Orleans can continue this pattern by attracting and increasing diversity of economic opportunities and new appreciations for our way of life. Preserving our historic buildings is a vital part of that equation.