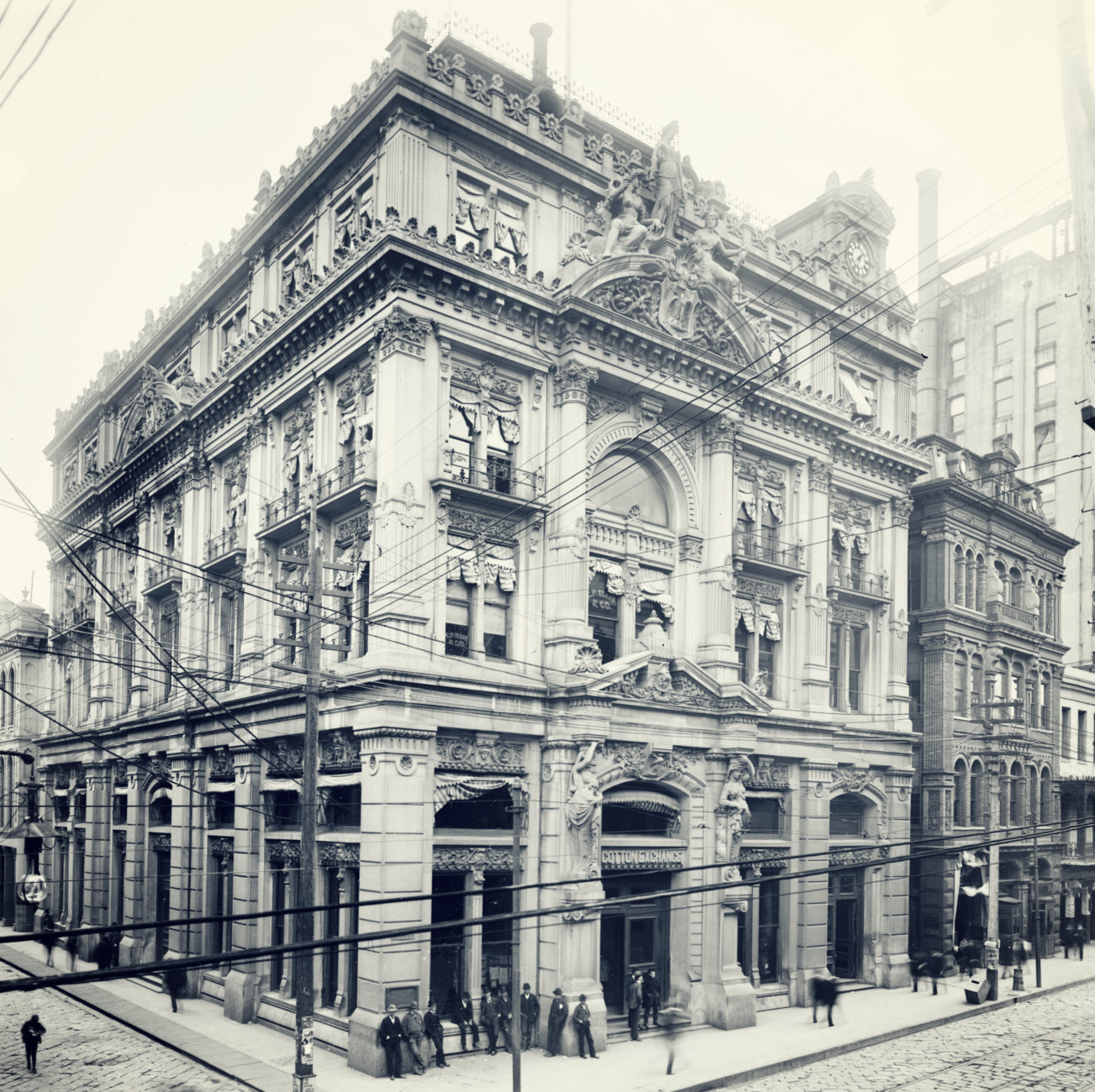 The building known as the New Orleans Cotton Exchange (constructed in 1921) on the corner of Carondelet and Gravier streets marks what was once among the most influential spots in the South, an area called “the cotton district,” or “the Wall Street of New Orleans.” It traced its origins to a series of technical breakthroughs on both sides of the Atlantic in the late 1700s. On the demand side, in England, the steam engine, mechanical spinners and the power loom drasti­cally reduced production costs, which lowered the price and increased demand for manufactured fabric. On the supply side, in the United States, the introduction of Sea Island cotton and upland varieties expanded the plant’s growing range, while Eli Whitney’s “cotton engine,” or gin (1793) enabled a ten-fold savings of time to remove seeds and debris from lint. With cotton poised to boom, settlers from the Atlantic seaboard migrated to the lower Mississippi Valley, which, along with the key transshipment port of New Orleans, were now under American dominion, thanks to the Louisiana Purchase in 1803.

Cotton plantations were soon established throughout the rich bottomlands and loess bluffs between Baton Rouge and Natchez, served by an ever-growing armada of yet another technological advancement: shallow-draft paddle-wheel steam­boats. Within a few years, cotton rose from a minor regional crop to a major ex­port. The two million pounds of cotton raised in Louisiana in 1811 quintupled in 10 years, which in turn nearly quadrupled, to 38 million pounds, in 1826. By 1834, the harvest was over 62 million pounds. For decades to come, New Orleans would serve as a key node in the Cotton Triangle, where Northern-owned ships would ferry cotton to ports like Liverpool, proceed to New York or other Northeastern cities with cargos of fabric, and return to New Orleans with Northern manufac­tured goods.

The ornate Cotton Exchange, opened in 1883 on Carondelet at Gravier, is seen here in 1900. Photo courtesy Library of Congress

The boom breathed new life into the institution of slavery. After the United States banned the international slave trade in 1808, a rigorous domestic trade en­sued, and over the next half-century, nearly a million African Americans would be sold out of the upper South, where tobacco had depleted the soils and manufac­turing began to eclipse agriculture, for transport either overland or “coastwise” to the wharves of the nation’s largest slave marketplace, New Orleans.

Depending on the season, those same wharves would have bustled with a peck­ing order of cotton workers. Among them were the “roustabouts,” who handled the bales on the steamships until the vessel docked, at which point “screwmen” ex­tracted the bales for longshoremen to organize into shipments and pass them on to “draymen,” who hauled them to the cotton presses. There, rollers moved the bales to the “scalemen,” who loaded them onto scales for the “weighers” while pulling lint samples for the “classers,” who graded the lint by color, cleanliness, and fiber length.

That was the key information needed by the professional class. At the top of their pecking order were cotton brokers, merchants and agents, who kept records, tracked bales, and decided whether a client’s crop should be sold locally, shipped out or warehoused in anticipation of better prices. Cotton factors, a particularly powerful profession, accepted cotton on consignment from planters and sold it at the highest prices obtainable. Factors also supplied plantation equipment, pro­vided financial services, and generally represented planters’ interests in the mar­ketplace, going so far as to serve all the needs of a wealthy rural planter family.

Each tier in the New Orleans cotton industry had support echelons. The profes­sionals dealt with insurers, bankers and lawyers; the presses needed machinists and engineers; the dock workers needed tools and equipment. Ancillary parties such as cotton seed oil manufacturers, ginneries, pickeries (which salvaged scrap lint), makers of screws, ties and presses, and myriad others serviced the industry, creating thousands of jobs throughout New Orleans. And of course, the entire system rested squarely on the shoulders of tens of thousands of enslaved field workers.

The nature of trading a commodity like cotton entailed constant personal interaction and information-sharing. This social aspect drove firms to cluster together spatially to form districts, and as the districts grew, so too did their clout — which attracted more firms. So formed New Orleans’ cotton district: entries from Cohen’s City Directory for 1854 indicate that cotton professionals had by this time aggregated around Carondelet and Gravier streets in what was then called the Faubourg St. Mary, or the American Sector. Of the 147 cotton firms listed that year, 46 had addresses on Carondelet, and another 24 operated on Gravier Street, far more than any other street. About 90 percent of the city’s professional cotton concerns were situated within a four-by-four-block area centered around Carondelet and Gravier.

By 1861, fully 174 of the city’s 465 commission merchants and cotton factors — three out of every eight — had addresses on Carondelet or Gravier. The draw of the district was so strong that even dealers in cotton gins and in slaves set up shop nearby. Gravier Street had seven slave dealers operating pens or compounds. Nearby Baronne Street was home to another seven.

What was lacking in the cotton district was one centralized place for interac­tion and transaction. “Most of the cotton business was conducted in the open air, up and down Carondelet Street,” recalled one veteran merchant, or “in sa­loons, which called themselves ‘exchanges.’” The need for a space only grew after the Civil War, when cotton professionals not only had to rebuild an industry, but also its labor force.

Toward this end, a hundred industry leaders in February 1871 organized the New Orleans Cotton Exchange, chartering the organization to provide meeting space; arbitrate disputes; establish rules, regulations, and standards; serve as an information clearinghouse; and promote and market the industry. After initially operating out of rented rooms, the Cotton Exchange contracted for a three-story building on Gravier at Theater Alley, a narrow pedestrian way also called Varieties Alley (it’s still there). A decade later, the growing organization decided to erect a larger and more ornate building on the corner of Carondelet and Gravier. Costing $380,000 and opened in 1883, the florid edifice, with elements of Second Empire, Renaissance and Italian style, featured a spacious Exchange Room with Corin­thian columns, gold ceiling medallions, fresco murals, sculptures, and a fountain around which cotton futures were sold. A steam elevator brought brokers to well-appointed offices and meeting rooms throughout the four upper floors. For the next 40 years, this building functioned as the “capitol” of New Orleans’ cotton district, just as New Orleans served as the “capital” of Mississippi Valley cotton production. “Carondelet and Gravier streets are considered the centre of the cot­ton business, and in this neighborhood are clustered all the large houses,” wrote one journalist in 1893. Of the 283 Exchange members listed in the organization’s 1894 charter, 94 percent worked within two streets of the Cotton Exchange.

Edward King described a typical day in the cotton district in his 1875 book, The Great South. “Cotton is the only subject spoken of; the pavements [by] the Exchange are crowded with smartly-dressed gentlemen, who eagerly discuss crops and values, and who have a perfect mania for [cotton], each worshipping at the shrine of the same god. From high noon until dark the planter, the factor [and] the speculator flit feverishly to and from the portals of the Exchange, and nothing can be heard above the excited hum [but] the sharp voice…reading the latest telegrams.”

World War I meant rocky times for American cotton, as European markets closed and market quotations ceased. But demand for lint increased, for military uniforms, while the movement of matériel to the front rejuvenated river for trans­portation. The South produced its first billion-dollar crop during these years, and doubled it in 1919. Counting on a rosy future, the New Orleans Cotton Exchange in 1920 had its aging building demolished, in part for structural problems trace­able to its lack of foundational pilings. The cornerstone for the new eight-story, steel-frame corner building, designed with a Renaissance flair by Favrot and Livaudais and costing $1,222,520, was laid on the organization’s fiftieth anniver­sary in 1921. Festivities marked the occasion, and the future looked bright.

The former Cotton Exchange, built in 1921 and recently transformed into a hotel and a bank, as seen from the top of One Shell Square. The cornerstone for the building, designed by Favrot and Livaudais, was laid on the organization’s 50th anniversary in 1921. Photos by Richard Campanella.

The optimism proved to be ill-founded. Government regulations, foreign com­petition, a shift in domestic production to drier Western environs, coupled with the emergence of Dallas as a business hub, effectively ended New Orleans’ reign as the nation’s premier cotton port. Of the 93 cotton factors listed in the New Orleans City Directory in 1880, only 15 operated in 1921 and one remained by 1949. It got worse: “We went from trading thousands of contracts in the early ’50s to maybe five contracts in all of 1962,” recalled Eli Tullis, a retired broker from one of New Orleans’ last active cotton families.

In the fields, floods and boll weevils took their toll, and cotton acreage in Louisiana declined from almost two million acres in 1930 to only 130,000 acres today. Accordingly, leaseholders at the Port of New Orleans switched from cot­ton to bananas, coffee, lumber, rubber and metals. Today, only two companies keep cotton moving through New Orleans, from warehouses at the Napoleon Avenue Container Terminal for export to Pakistan, Turkey, Latin America and elsewhere. The bales are packaged and hidden from view, and most New Orlea­nians under the age of 50 have probably never seen one.

As for the New Orleans Cotton Exchange, in 1962 the organization sold its landmark building to the Universal Drilling Company, as if to signal the upcoming oil boom, and became a renter in its own home. What finally killed the Exchange was the Agricultural Act of 1964, which subsidized domestically consumed cotton and controlled once-volatile prices, thus eradicating the fu­tures market. When the Exchange finally closed on July 9, 1964, its last presi­dent, C. Layton Merritt, wistfully told the Dallas Morning News, “We cede our role in the market place to the Secretary of Agriculture, the cooperatives, and history.” The building was renovated into a hotel in the 2000s, and the corner space at Carondelet and Gravier now hosts a bank.

Richard Campanella, a geographer with the Tulane School of Architecture, is the author of Bienville’s Dilemma, Lincoln in New Orleans, Bourbon Street: A History, and other publications. This material was drawn from his books Time and Place in New Orleans (2002) and Lost New Orleans (2015). He may be reached through richcampanella.com, rcampane@tulane.edu, and @nolacampanella.