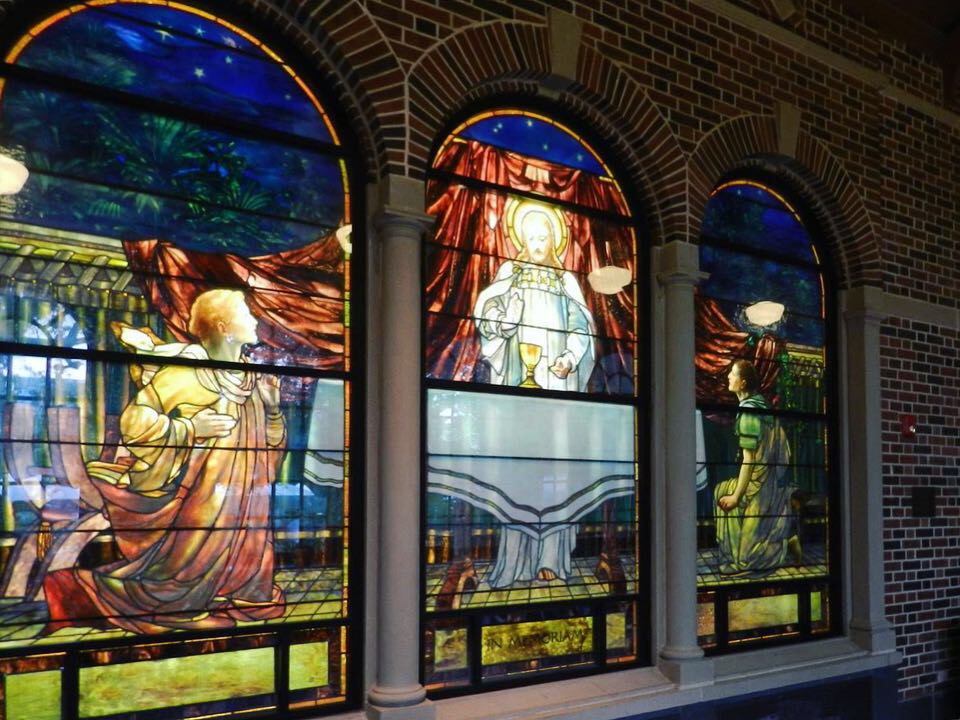 A recent tour of Louis Comfort Tiffany stained glass windows started at the Newcomb Art Museum and continued at the Myra Clare Rogers Memorial Chapel on the Tulane Uptown Campus.

Tiffany was a pioneer in the art of stained glass and a key figure in the Arts & Crafts Movement.

Tom Friel, Coordinator for Interpretation & Public Engagement at the Newcomb Art Museum, led the tour. It began in the foyer of the museum where two triptychs of Tiffany memorial windows are on view—The Resurrection, 1894 and Supper of Emmaus, 1895. The windows were originally in the Old Newcomb Chapel at the campus in the Garden District. They were stored in 1918 when the campus relocated and brought out of storage in the 1970s. They have been beautifully restored.

At the Rogers Memorial Chapel we viewed a stunning 1918 rose window featuring the initials H.S.N., the monogram of Harriott Sophie Newcomb, the daughter of Josephine Louise Newcomb, the philanthropist whose donations led to the founding of Newcomb College.

Also in the Chapel is the Tiffany Window Collection—a triptych dated 1894.

Lastly, we viewed a single Art Deco style window commissioned in 1911 featuring the Lotus Fountain and the Administration building from the former Washington Avenue campus.