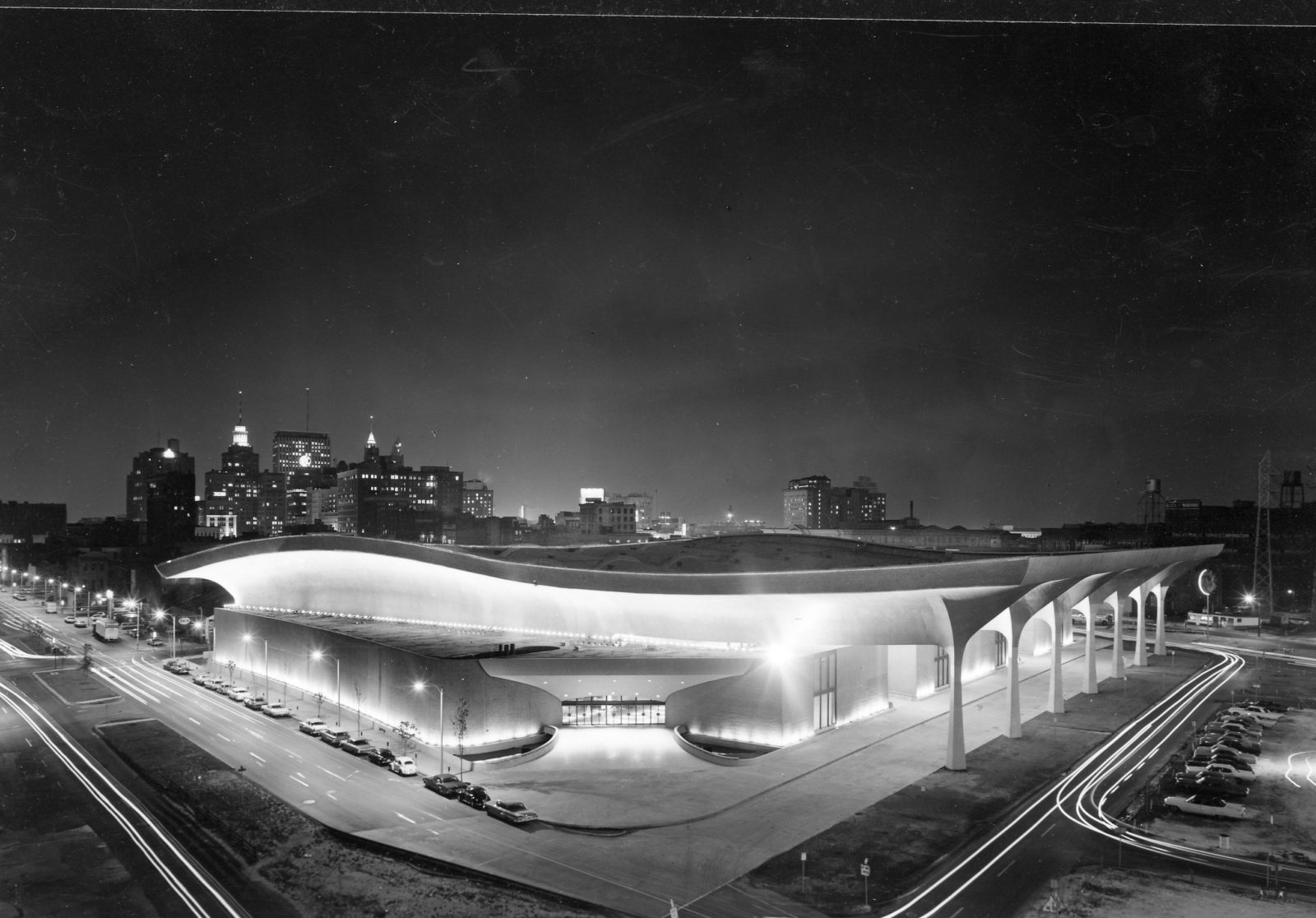 In 1955, Progressive Architecture’s second Annual Design Awards recognized more buildings by architects from New Orleans and Louisiana than any other city or state in the nation. That’s right — before New Orleans was “the city that care forgot,” it was one of the most architecturally progressive cities in the nation.

Yet in the decade following Hurricane Katrina, the city lost significant Mid-Century Modern architecture at an alarming rate. In the mid-20th century, six New Orleans buildings received national awards from the American Institute of Architects (AIA). Four of those six are now gone. Of the city’s 25 public schools de­signed and built in the 1950s, today only one is left standing.

Thankfully, some important structures survived. For example: we can celebrate the recent dedication of the Mid-City Library in the former Automotive Life Insurance building as a case for the adaptability of Mod­ernist architecture, the inherent sustainability of its re-use, and a recognition of its regionalist sensibilities. In keeping with the residential character of the neighborhood, the firm of Curtis & Davis designed a two-story building set back from the street. The façade is distinguished by its concrete and steel vaulted front porch. The parking lot in the rear of the building is accessible by a porte-cochère, a nod to Spanish Colonial architecture of old New Orleans. The interior arrangement of ancillary spaces around a two-story central court again reminds us of the great courtyards of the French Quarter. In so many ways, and hopefully for many more days and years, it belongs here. – Francine J. Stock, artist and archivist

The Rivergate Convention Center, originally known as the International Exhibition Facility, was completed in 1968 and was regarded as one of the city’s most innovative and modern structures. The Expressionist-styled building featured six barrels of thinly sculpted, arched concrete in its vaulted roof. Spanning a range of 253 feet, the roof was record setting and engineered with a thickness of only five inches. A tunnel was built underneath the Rivergate to use as an expressway, but it was never put into use. The Rivergate was designed to be a bastion of tourism for the city’s burgeoning hospitality industry before its contested demolition in 1995. The Rivergate Convention Center was an architectural landmark located downtown near the Mississippi River at the intersection of Canal and Poydras Street, now the home of Harrah’s Casino. The unique structure was designed by the prestigious architectural firm of Curtis & Davis, and it is thought to be one of their most significant works. Photo: Southeastern Architectural Archive, Special Collections Division, Tulane University Libraries 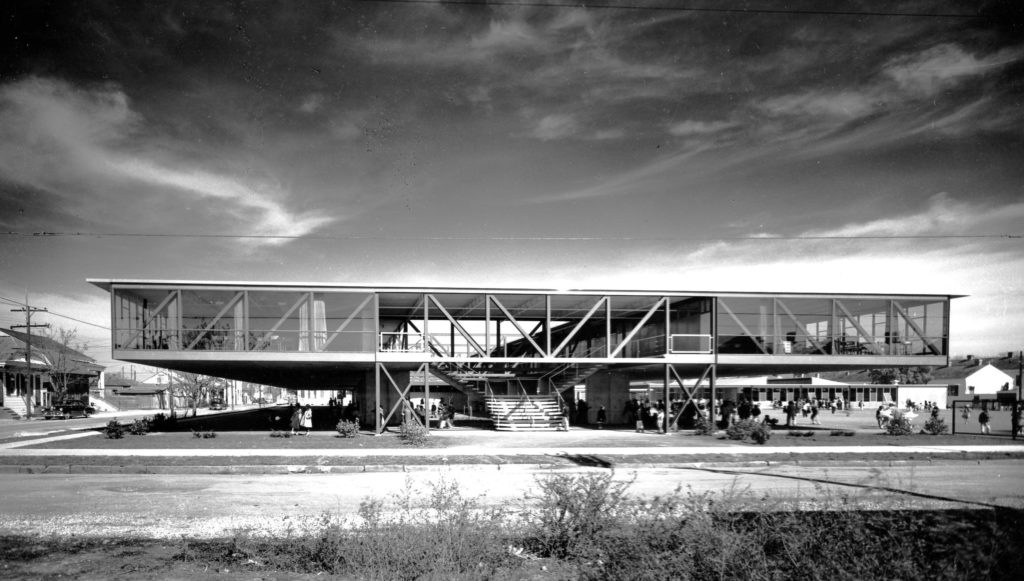 The historic Phillis Wheatley Elementary School was completed in 1954. The structure was raised a full story off the ground, providing shade underneath the building for students and recreational activities. The building became an internationally recognized flagship of Regional Modernism; its design incorporated open corridors, cross ventilation and bilateral lighting in direct response to place and climate. The raised design also protected the building from extensive flood damage during Hurricane Katrina in 2005. Phillis Wheatley Elementary won the AIA Honor Award in 1955 from Progressive Architecture. The architect, Charles Colbert, is credited for leading the initiative to modernize New Orleans’ public schools. Colbert, who served as the supervisor and director of the School Board’s Office of Planning and Construc­tion, conducted a comprehensive study of all existing structures to inform plenary goals and designs for new education facilities. Phillis Wheatley Elementary School was placed on the World Monuments Funds Watch List in 2009; it was demolished in 2011 despite community, historical and architectural voices of dissent. Photo: Southeastern Architectural Archive, Special Collections Division, Tulane University Libraries 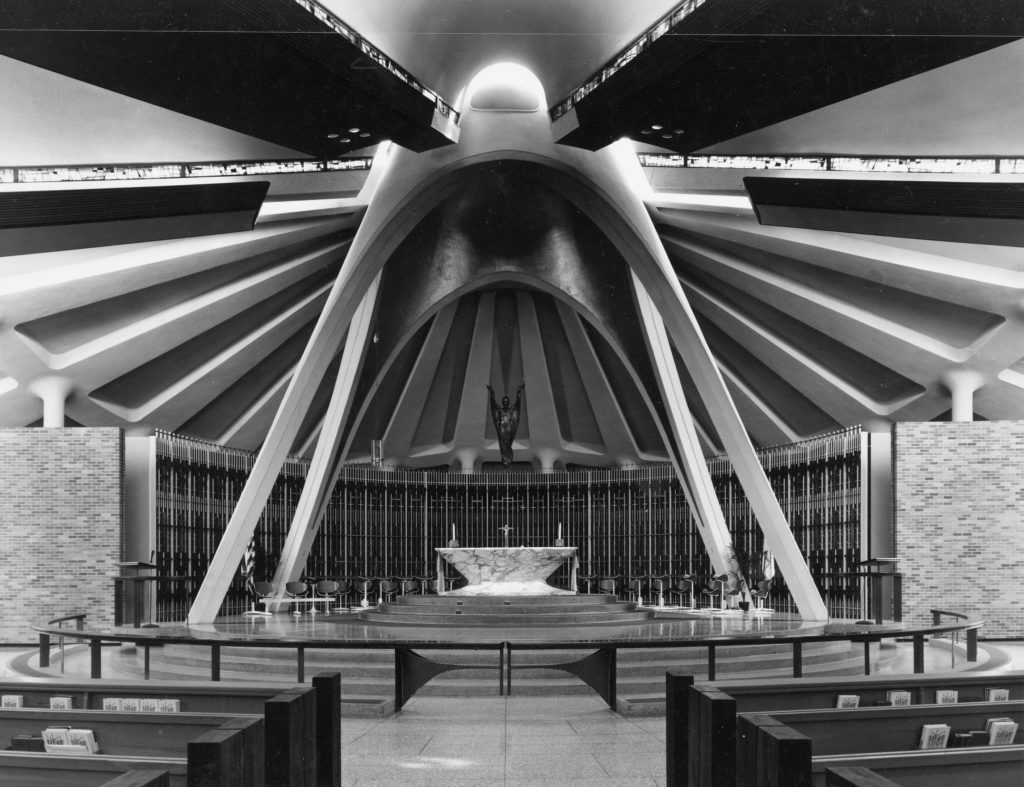 The St. Frances Cabrini Church was designed by Curtis & Davis and completed in 1963. The structure received a Merit Award from the Louisiana Architects Association and an honorable mention from the Church Architectural Guild of America. In addition to the high praise for the thin-shelled concrete roof and unique Regional Modernist design, the commissioned marble altar was a large, masterfully carved import from Italy. The steeple of the church extended down through the roof, splintering in curved pillars that encap­sulated the altar area. St. Frances Cabrini Church was demolished in 2007, following extensive flood damage incurred from Hurricane Katrina, and was replaced by a new school campus for the displaced Holy Cross High School — formerly of the Lower Ninth Ward. Though key elements of the original structure were preserved, it was considered a grave loss for the historic preservation of regional modernistic designs in the city. Photo: Southeastern Architectural Archive, Special Collections Division, Tulane University Libraries 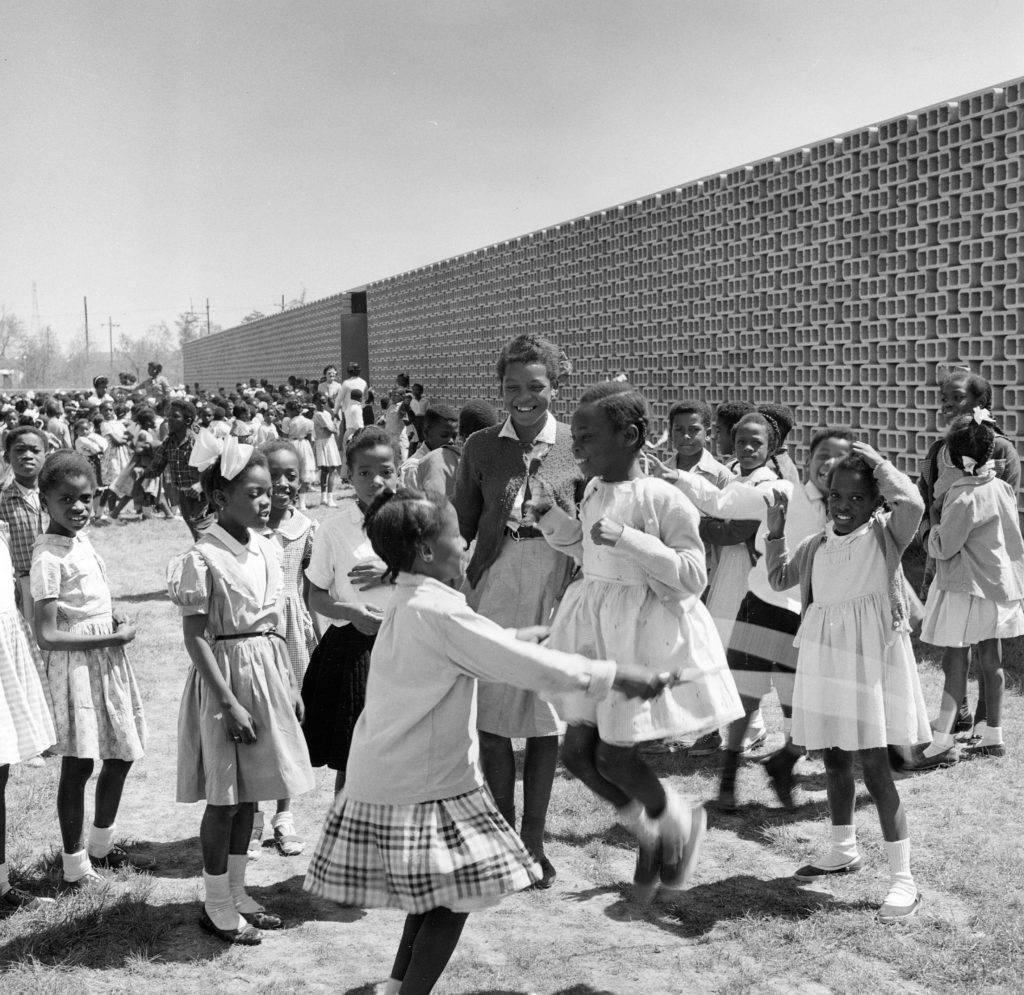 George Washington Carver High School opened in 1958 and operated for 53 years prior to its demolition by the Recovery School Dis­trict in 2007. The school, originally designed as a joint campus for middle and high school students, was located in the Ninth Ward’s Desire community. The structure was innovative, and its architecturally significant design by Curtis & Davis won Progressive Architecture’s most prestigious award, the First Design Award, in 1957. The auditorium consisted of hinged, vaulted concrete with bridge-like buttresses that extended beyond the building, providing shelter for students. The Mid-Century Modern design was one of the first to integrate middle and high school students, allowing for the shared use of facilities. Photo: Southeastern Architectural Archive, Special Collections Division, Tulane University Libraries

The Circa 1966 Olivetti Building was designed by New Orleans-based architect Charles Colbert. The structure, located at 1900 Canal St., was cre­ated to be a showroom for the Olivetti Typewriter Company. Colbert incor­porated structural elements that featured oil field pipes of different heights topped by Olivetti-Underwood typewriters. Colbert is credited as having cre­ated an “International Style jewel box.” Olivetti, an Italian-based company renowned for its corporate philosophy on design, exclusively hired critically acclaimed modern architects to design its showrooms and offices. Colbert’s plan is considered to be his most opulent and intricate. Adriano Olivetti, who ran the company during the Modernist era, espoused design as “…a question of substance, not just form…but a tangible reflection of a way of being and op­erating.” It was cleared as part of the wholesale demolition of Lower Mid-City for the University Medical Center between 2008 and 2010.

The International Longshoremen Association Building was constructed in 1959 by the Lawrence and Saunders architectural firm. At the time of the building’s construction, the Longshoremen of New Orleans were segregated by race, and the structure was home to the Black Longshoremen’s Union. The building also became the site of events pivotal to the Civil Rights Movement, including talks by Dr. Martin Luther King, Jr., who spoke at the hall soon after its completion in 1959, key leaders of the Southern Christian Lead­ership Conference (SNCC) and the National Advancement of Colored People (NAACP). The hall also hosted numerous social events for the black community — weddings, funerals, second lines, Mardi Gras Indian events, jazz and blues concerts — and is recorded as hosting balls for the gay community when they were socially excluded from other venues. When the Black and White Unions merged, the unified organization remained at the longshoremen’s hall. The building was destroyed beyond repair during Hurricane Katrina. Photo: Tulane University School of Architecture Slide Library

See our following list of 5 favorite Mid-Century Modern structures in New Orleans that are still intact.

Spend the sultry New Orleans summer exploring our city’s world-class Mid-Century Modern architecture with the Preservation Resource Cen­ter, the New Orleans Architecture Foundation and DOCOMOMO US/ Louisiana! The Mid Mod NOLA series will feature exciting events every two weeks from May 25 to July 20: Get a private tour of the Superdome, sip chilled wine in the home of one of New Orleans’ iconic Modernist ar­chitects, learn about our region’s architecture from experts and mix and mingle in the Black Pearl neighborhood for an exclusive block party.