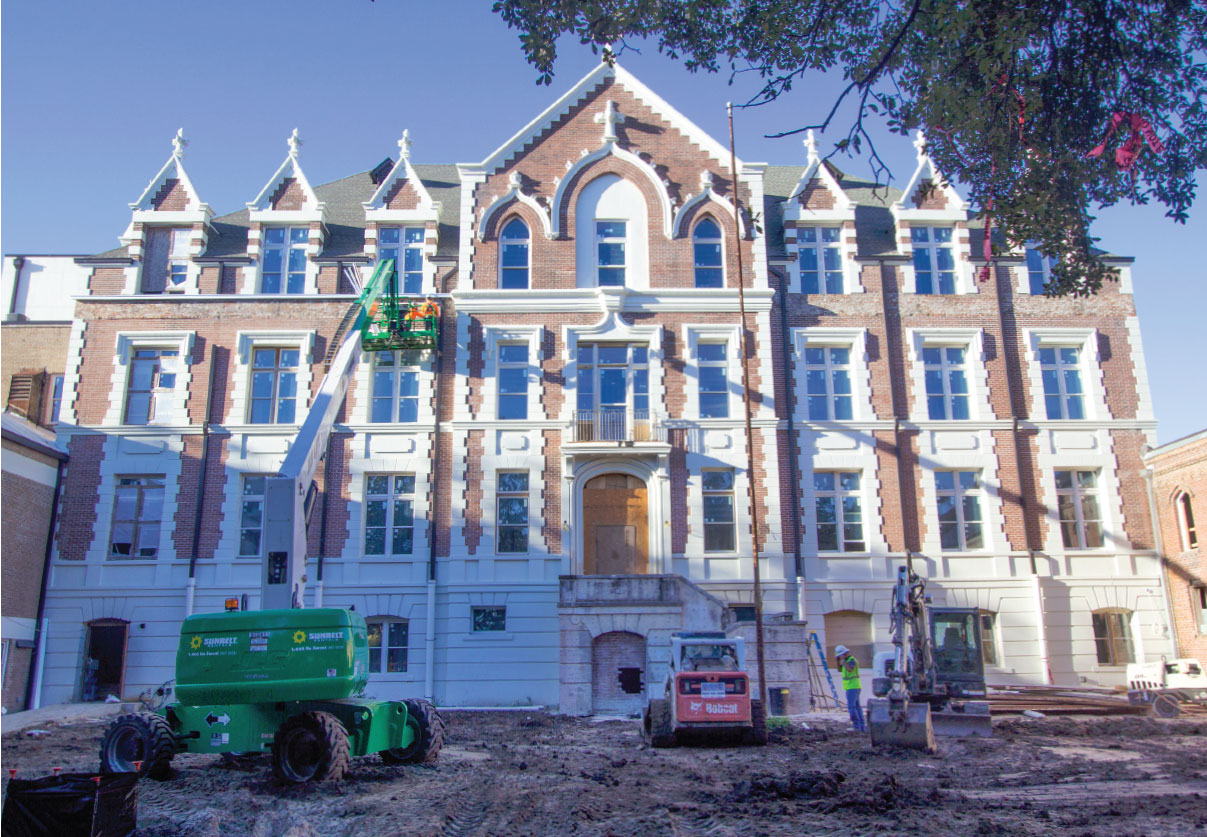 It has been a project many years in the making, but the rewards for the city’s Tremé neighborhood will be huge.

Preservation in Print first reported on the transformation of the former Andrew J. Bell and Ben Franklin schools into affordable artist housing by national nonprofit developer Artspace in April 2013, six months after the project’s groundbreaking. Artspace didn’t officially acquire the property from the Orleans Parish School Board until 2016, however; now, in Fall 2017, the massive project is more than halfway complete.

The project involves the transformation of two city blocks (bound by Ursulines Avenue and N. Galvez, Dumaine and N. Johnson streets) into a campus that will provide 79 affordable apartments for artists, space to house art-based nonprofits, and areas for performances and gatherings across 148,000 square feet and six buildings. The site is home to two his­toric schools, which are being adaptively reused with as many historic elements retained as possible, and a large greenspace that is being land­scaped into a park for residents and the community. Artspace is spend­ing millions on water retention for the greenspace and commissioned deep cisterns to be dug below to mitigate flooding.

Residents began to move into the former Ben Franklin School — a 1927 building designed, Like many New Orleans public schools, by ar­chitect E.A. Christy — in October. The new residents of the building’s 23 units enjoy new amenities amidst the restored historic school’s original features, including large windows, tall ceilings, exposed brick and wood floors. The wide hallways that students once traversed between classes now act as gallery walls, providing the perfect space to showcase the work of the building’s artist residents.

The building’s renovation was complex, according to architect Gerry Billes and project architect William Petersen. “We had to do a lot of in­ternal replacement of the structural frame of the building; it had been damaged by two hurricanes and water intrusion,” Petersen explained. “As we got into the buildings, we began uncovering long-term damage. We then had to piece it back together while saving the historic elements.” The architects worked with contractor firm Gibbs Construction from the start of the project, a process which held distinct advantages for both firms and the overall success of the development, Billes said.

The result is an apartment building that is full of character. “The great part about it is that the apartments are all unique; they’re all slightly dif­ferent,” Petersen said.

“We build spaces we would want to Live in,” said Joe Butler, Artspace’s New Orleans project manager. “There should be no difference between af­fordable housing and not.” Units in the building start at $450 for a one bed­room apartment and $750 for two bedrooms — well under market value.

Still under construction is the Bell School and its ancillary buildings, which will house the bulk of the site’s apartments. The magnificent Gothic school building was constructed in 1904 as St. Joseph Academy High, an all-girls Catholic school originally run by the Sisters of St. Joseph. Also on site is a Gothic chapel the order of nuns commissioned in 1887, and build­ings that were later additions to the school — all of which are currently under renovation.

Artspace has raised almost $33 million thus far to fund the project, including utilizing state and federal Historic Tax Credits, New Markets tax credits and Low Income Housing Tax Credit. Despite that success, Artspace is still short $500,000 — money that is critical toward finishing the renovation of the circa-1887 chapel, which will be turned into a gath­ering space for residents. Butler said he is still seeking funders or donors who can make the project whole.

He anticipates construction to be complete by the end of 2017. Stay tuned for a story in Preservation in Print on what is sure to be a grand finale for transformation of these buildings into the Bell School Artspace Campus.