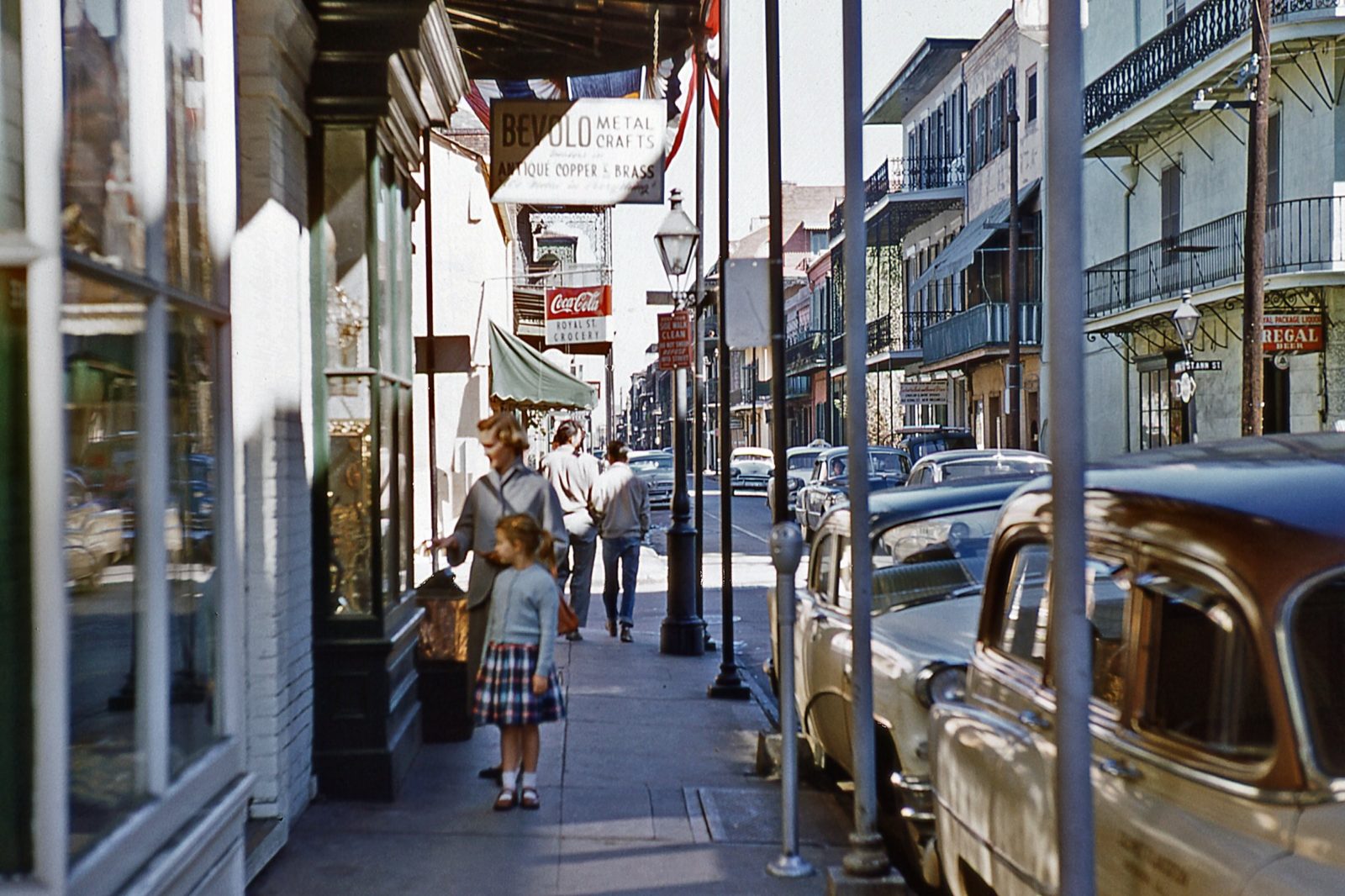 New York can keep all of their lights downtown, and Las Vegas may con­tinue to burn their strip with neon. Here in the Crescent City, style takes pre­cedence over quantity. And here, New Orleans’ own Bevolo Gas & Electric Lights, the makers of the French Quarter’s famed copper lanterns, have been the style makers residents rely on since the mid-20th century.

Founded in 1945, the iconic Bevolo company maintains their craft of mak­ing hand-riveted copper gas lights to this day, serving as the oldest and largest fabricators of said lanterns in the country.

The original conductor of the multi-generation, family-run Bevolo Gas & Electric Lights was Andrew Bevolo, Sr., a man renowned as a master crafts­man. Bevolo cut his teeth working for the Ford Motor Company, and later for Igor Sikorsky, aiding in the construction of the first Sikorsky helicopter. He also worked for another New Orleans icon, Andrew Higgins, building the Word War II landing crafts dubbed ‘Higgins Boats.’ After the war was over, he transitioned to general metalworking; during this time, he first manufactured gas and electric fixtures.

Not long after founding his company, Bevolo’s artisanal skills and hand riv­eting technique made an impression, becoming widely touted as revolution­ary. Working alongside renowned architect A. Hays Town, the duo designed the “Original French Quarter Lamp,” which has become an icon in the city of New Orleans.

The Era of the Gas light

Why do so many businesses and homeowners choose gas lanterns over the mod­ern convenience of electricity? Is this a choice for historical reasons, or does it stem from a yearning of simplicity, a romanticized sense of old-world nostalgia?

Prior to the 1890s, which was the beginning of the wide-sweeping takeover of electric lighting, gas was gold, the primary source behind the lamps of the world. First developed in England around a hundred years before the rise of electricity, gas lighting was a revelation of illumination.

On January 28, 1807, this new technology was utilized by Frederick Albert Winsor to light the London street of Pall Mall. While Winsor was demonstrat­ing the wonders of gas lighting around London, he founded the Gas Light and Coke Company.

The 19th century was indeed the era of the gaslight, with these seemingly magical lanterns shining bright throughout the streets of Europe and Ameri­ca. But, its commonality would eventually be placed in jeopardy.

The importance of gas lamps was conveyed in an early 20th-century article in London’s Daily Telegraph: “Gas has done wonders for London, and it will do still more. There were those who thought that its doom was written when its sparkling younger sister appeared on the scene. But rivalry has only disclosed its latest possibilities. Without entering into any comparisons of the relative values of gas and electricity as an illuminant for the public streets, it is undeni­able that some of the best-lit thoroughfares of London owe their brightness to gas, in the new guises which it has put on during the last few years. Improved processes are continually being discovered.”

By today’s standards gaslights are an outdated technology, yet the allure of these lanterns continues to endure. Modern electric lights are quite simply unable to compete with the timeless beauty of a copper gas lit lamp — the nostalgia effect.

The preference for gas lights are not limited to those who desire a throw­back to the Victorian Era. Many of said lamps still line the streets of historic districts from around the world. And, of course, this includes New Orleans.

As one of the first cities in the United States to light its streets and resi­dences with gas, the absence of the copper lantern would leave New Orleans incomplete. To walk down the dark streets of the French Quarter or Garden District at night and see front doors softly illuminated by flickering flames is to experience a quintessential New Orleans scene.

And it’s a scene and feeling many seek to duplicate, from the suburbs of Atlanta to the shores of Rosemary Beach; the residential gas lighting trend has been rising steadily. One of the major companies leading the charge in this pleasant regression is Bevolo Gas & Electric Lights.

The Return of Residential Gas lighting

Bevolo Gas & Electric Lights prides itself as being one of the most knowledge­able businesses in their industry. One of the first things that any gas lighting company will tell you (or should): Electricity is still your best option for util­ity lighting. An open flame, in reality, is only equal to the output of a 25-watt light bulb — and not a realistic choice for lighting your whole home.

Common uses for gas-lit lamps at a pri­vate residence are in the entryway of one’s home, just outside of a front door or in the driveway leading to a garage. For Chris Bevolo, fourth gen­eration in the family business and man­ager of Bevolo Gas & Electric Lights, his personal favorite use of gas lighting are the lamps flicker­ing on his back patio. “I can see them from my kitchen, living room, dining room and of course on my back patio, when we find those infrequent mo­ments to relax.”

Some might believe this am­biance to be a luxury, a super­fluous expense. But, if you opt for the “cheaper chicken” (natural gas over propane), the cost of gas lighting should cost no more than $10 a month (per fixture), sometimes even less. This is not the case in Europe, where gas is more expensive than electricity.

Bevolo also strives for efficiency. “Our patented gas jet assembly burns roughly one-third of the consumption of any other gas light on the market,” Chris said.

Due to the fixtures’ handcrafted details, they can cost up to $3,000. Bevolo Gas & Electric does offer a variety of lanterns at different price points, though, starting at around $275. Today, the company offers 500 traditional styles of lighting, inspired by historical lamps from Spain, Italy and France — but the French Quarter model designed by the senior Bevolo and A. Hays Town re­mains its most popular lantern, and its trademark.

While Bevolo is a French Quarter original, the company’s limbs extend well beyond its New Orleans roots. In addition to their locations in the greater New Orleans area, they have showrooms across the U.S. and in 50 countries.

What sets Bevolo’s fixtures apart from the competition?

The simple answer is their construction methods. The senior Bevolo used aviation techniques he learned from his time working for Igor Sikorsky to inspire him in his creation. One of the most distinguishable influences of avia­tion methodology he used that separated his lamps from others was the deci­sion to hand rivet, in place of soldering.

Upon their arrival home from the war, soldiers brought along with them items they recovered, including broken gaslights from London. The soldiers would bring the lanterns into Bevolo’s shop to have them repaired. Many of these lanterns could not be saved using conventional soldering techniques, as the metal was too thin.

So Bevolo, remembering his aviation days, fixed the lamps by riveting them back together. It was through these repairs that Bevolo discovered that over time the heat of an open flame would eventually melt soldering, but rivets were able to withstand the heat and even shine more brightly.

“In a day in age where ‘designed in California’ or ‘assembled in America’ is stamped on boxes that are filled and printed overseas, we wanted to show people what a truly American product looks like,” Chris Bevolo said.

Aiding in their mission, the Bevolo family opened up their own museum in 2015. They did so, according to Chris, to “remind people what hammers were and teach them about hand set rivets.

“What better way to show people than to take them back through time?”

The Bevolo lighting museum at 316 Royal Street is open every day. Check their website for hours. Let the original French Quarter lamps guide your way.

Want to stay informed of the latest preservation news in New Orleans? Become a member of the PRC to get Preservation in Print delivered directly to your door nine times a year!