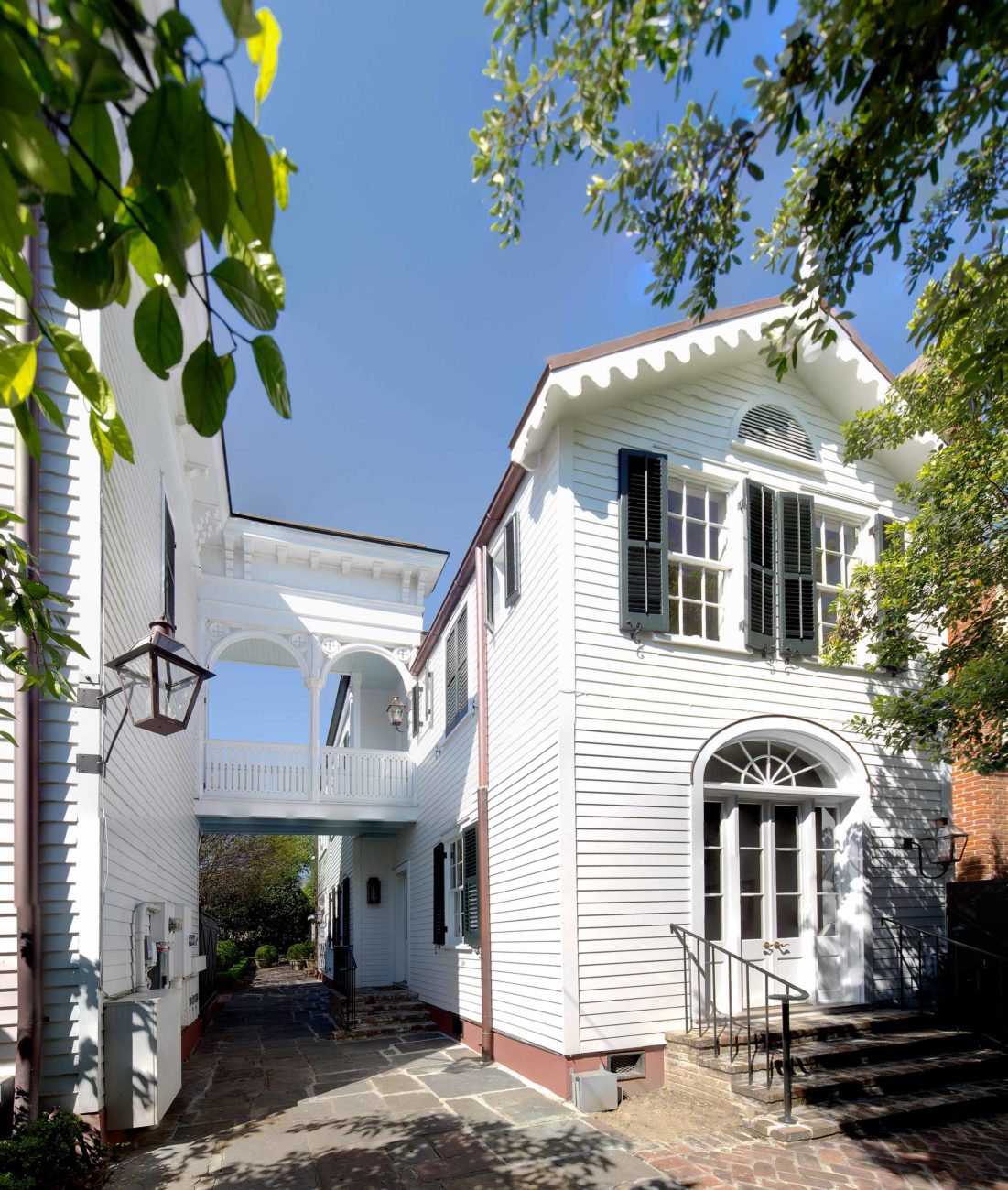 Nationwide trends toward urban living and “aging in place” have made historic neighborhoods such as New Orleans’ Garden District more popular than ever. This unique neighborhood has limited space, however, and residents are making use of every square inch, including ancillary buildings such as carriage houses. At 1210 First St., Katherine and Tony Gelderman’s home had a beautiful carriage house, but the two-story, two-bedroom, two-and-a-half bath building had not been renovated for over 15 years. It sorely needed re-thinking and “punching up” to make it more attractive and useful.

The Geldermans decided first that they wanted to replace the carriage house’s narrow iron spiral staircase. The staircase was difficult to use for all but the most agile climbers, and downright dangerous or impossible for those with mobility issues. They immediately called their close friend and historic architecture expert (and Garden District resident) Davis Jahncke of Jahncke and Burns Architects, and asked him to assist with plans for the project. Jahn­cke involved his associate, architect Andrew Spaulding, and Spaulding knew immediately that a new and more functional staircase would require an in­crease in the footprint of the carriage house. This, he explained, would in turn offer the Geldermans the opportunity to improve the building’s proportions, but it would also mean that the entire carriage house would need to be gut­ted and revised. The Geldermans cheerfully agreed to place the building in the architects’ capable hands, and started on an exciting journey of historic restoration and renovation.

Intricate projects like this one require a great deal of collaboration and flex­ibility; being experienced, award-winning building renovators themselves, the Geldermans knew this, and assembled a unique design team to assist. In addition to the architects, they brought in another close friend and frequent collaborator, Jeanne Barousse of Jeanne Barousse Designs, as well as Belva Johnson, a well-known New Orleans-based designer of kitchen and baths. Greg Walters joined the group as the contractor.

In this renovation, the design phase was purposely not even complete when the demolition permit was issued. This allowed the design team to do selective demolition in order to uncover any hidden problems in the home’s structure or interior. By waiting to design the renovated house until after exploratory demolitions, architects could more accurately customize the design and final­ize estimated costs of the new project using information on parts of the house that may have to go, and others that could be saved. As with many buildings in the Garden District, substantial prior termite damage was uncovered during demolition, as well as a crumbling and insufficient foundation. With these all-too-common discoveries, the Geldermans decided to take the carriage house down to its frame, while hoping to salvage as much of the old lumber and elements as possible.

The total gut of the interior revealed a number of clues to the building’s evolution. Master millworker Robert Judice, who crafted all of the doors and decorative moldings for the project, pointed out to the Geldermans and the team the lack of a framed opening for an original staircase. This allowed Ju­dice to trace the building’s history. The carriage house probably began as a small stable sometime in the 1850s, the decade the main house was built. The second level of the building had likely been a hayloft that was also used for storage of light equipment, while the ground floor housed the horse and car­riage. Later, perhaps in the late 1800s, the second floor was finished as servant quarters with the addition of a unique breezeway/bridge connecting the sec­ond floor of the main house to the carriage house.

The instructions to the design team were generous: first, be opportunistic and use every nook and cranny, as if outfitting a ship interior, and second, look for ways to elevate the quality of the space with graceful and gracious design elements. With this mandate, the architects were able to reorganize the window arrangement of the main façade into a more orderly appearance that mimicked elevations of the main house. “Reordering the windows this way allowed us to create the impression that the carriage house has always been this way,” Jahncke said. In addition, the carriage house façade facing First Street was extended out four feet to align perfectly with the rear of the main house. Again, this subtle ad­dition gave the impression of being “original.” Helping this sleight of hand was the copying of every element of the First Street main house’s façade since it was already well-ordered, proportional and symmetrical.

Making this expansion required a modest zoning variance, as well as a completely new foundation and extensive reengineering of the structure. However, the extra few feet gained in either direction transformed and greatly expanded the interior space from 1,250 to nearly 1,700 square feet. This ex­pansion allowed for a gracious entry, classically proportioned stairs and far more usable living spaces throughout.

As with many renovation projects, one improved element leads to another. In this case, the stairs — graceful, curving and Classical, having been de­signed by the architects and built by the Stairway Shop in Elmwood and being, in the end, a “standout” of the renovation, according to Gelderman — suggested the need for better interior doors, more detailed ceiling moldings, and other design elements, such as the added gable spire at the front of the building. The clean, seemingly unpainted finish of the beautiful millwork crafted by Robert Judice inside the house was the result of a lot of conver­sation and collaboration, Spaulding said, especially between Barrouse and Jachnke. “We were using cypress, and we didn’t want to mask it too much,” Spaulding said, “but we didn’t want to leave it bare, either. Davis [Jachnke] wanted something to show the grain and not be overpowering, and Barrouse had a formulation for a pickle — a milk or limewash — that went on the wood, and was subtle. It was the perfect amount of finishing.”

The doors became a project unto themselves, requiring the architects to take a special (and pleasurable) field trip to Brennan’s Restaurant in the Vieux Carré to study a particularly fine example of a bead board panel door that the Geldermans wanted duplicated. In addition, the ceiling height of the second floor was increased by nearly a full foot through ingenious engineer­ing that required no change to the historic roofline. The overall effect of the higher second-floor ceilings is one of added grace. Downstairs, entering the spacious entry from the meticulous interior lawn of 1210 First St., the curv­ing lines of the new staircase create a high degree of elegance in a relatively small space, and set the tone for the entire house.

Beyond improving the overall layout of the building and the aesthetics of the carriage house, the Geldermans wanted to install the most efficient and advanced heating and air system available, as well as a water heating system that would be highly efficient. They faced a universal challenge in making old buildings livable: Buildings constructed before the advent of modern systems like central air conditioning and heating were not insulated or sealed against air leakage, which meant the build­ing envelope was much simpler to seal. Today, his­toric buildings are expected to house all manner of modern conveniences, and must be altered slightly to accommodate them.

Lucky for the Geldermans, Spaulding has exten­sive experience in energy efficiency. He knew that in a building of this size, most central air systems create unwanted bulk in the form of chases, closets, dropped soffits and lowered ceilings. In an attempt to avoid this, Spaulding sought the input of several HVAC contractors. At one point, a high-velocity system was considered due to its extremely small ducts; in the end, it turned out that a better fit for the project was an inverter driven, multi-split heat-pump suggested and installed by Sidney Lee of AC Ambulance. Its multiple refrigerant lines allowed for two zones: one upstairs, the other downstairs, all within one super-efficient system.

Spaulding also paid careful attention to build­ing science principles to protect the interior against excessive humidity. Other sustainable features in the building include high-performance 3000k LED recessed lights, a condensing gas tankless water heater, and “low e” film applied to the refurbished single-pane wood windows. The Geldermans asked that the bathroom be fitted with wall mounted dual flush toilets, and Belva Johnson selected the partic­ular fixtures used for the space based partly on the water they save. Throughout, Johnson’s bathrooms and kitchen designs and Barousse’s finish selections rounded out the updating of the interior to contem­porary upscale living standards.

The finished product represents the collabora­tive effort of technical trades and crafts as well as designers, engineers and architects, creating what is undoubtedly one of the loveliest carriage houses in the city. “This charming, comfortable and elegant building fits perfectly into the fabric of the Garden District,” Jahncke said. “I think the finished product is everything it can be without breaking out of its role as a dependency or ancil­lary building.”

“This renovation will stand the test of time,” Gel­derman agreed. “Jahncke and Burns got the scale, massing and elevations exactly right. The building appears to all the world as a carriage house on the outside. In the inside, it now operates as a small home. Only a highly experienced architect can ac­complish this.”