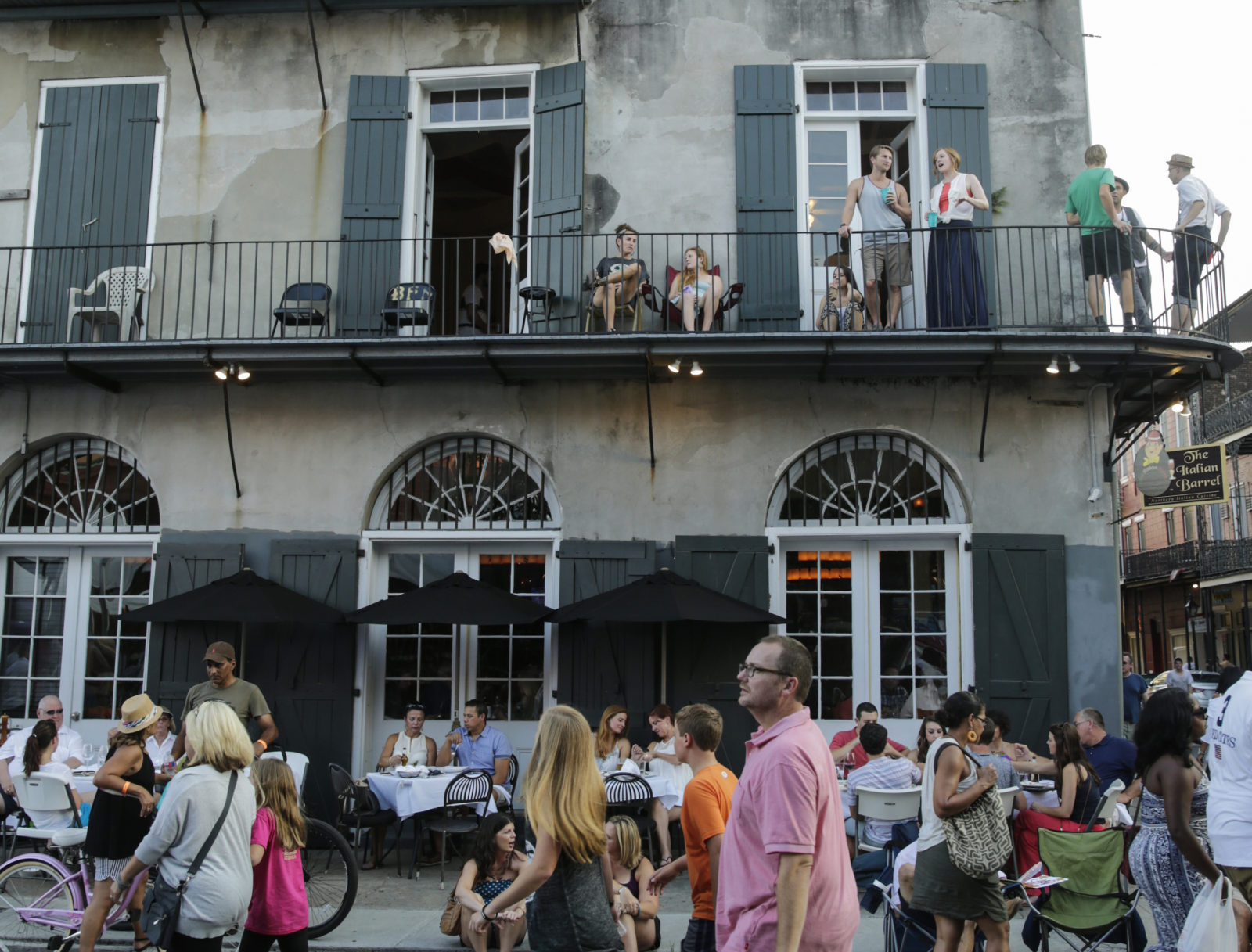 This story appeared in the May issue of the PRC’s Preservation in Print magazine. Interested in getting more preservation stories like this delivered to your door nine times a year? Become a member of the PRC for a subscription!

Header image: During the 2019 Satchmo Summer Fest, pedestrians walk near the French Market and the Old US Mint in the French Quarter. Photo by Chris Granger.

COVID-19 closures have rendered the once-bustling streets of the historic French Quarter themselves historic, as their quiet desolation probably has not been seen since the worst of the yellow fever epidemics of the mid-19th century. Even in the days after Hurricane Katrina, one bar remained open, and a few buskers played music on Bourbon Street.

But in normal times, movement on those Vieux Carre streets form a certain spatial pattern. If you were to position a camera-equipped drone above the French Quarter on any beautiful Saturday afternoon and observed the streets below, you’d likely see a consistent dogleg-shaped pattern in the flow of pedestrians. Most people, predominantly tourists, traverse the upper stretches of North Peters, Decatur, Chartres, Royal and Bourbon streets (the “thigh” of the dogleg), funnel through Jackson Square and Café du Monde (“hock” of the dogleg) to the riverfront, then follow along the French Market (lower leg) toward the foot of Esplanade Avenue. Some folks might next explore Frenchmen Street, after which most generally reverse their trajectory, returning along lower Decatur if not the French Market, and back through Jackson Square. The rest of the day is typically spent in the Decatur-to-Bourbon “thigh,” from Canal to St. Ann streets, while in the evening crowds gravitate to Bourbon Street, particularly the 200 to 500 blocks.

This was the case back in 2002, when I conducted a pedestrian survey of the Quarter and mapped out the patterns. While the shape has morphed somewhat since then (more on this later), it hasn’t fundamentally shifted, nor had it in the decades prior. 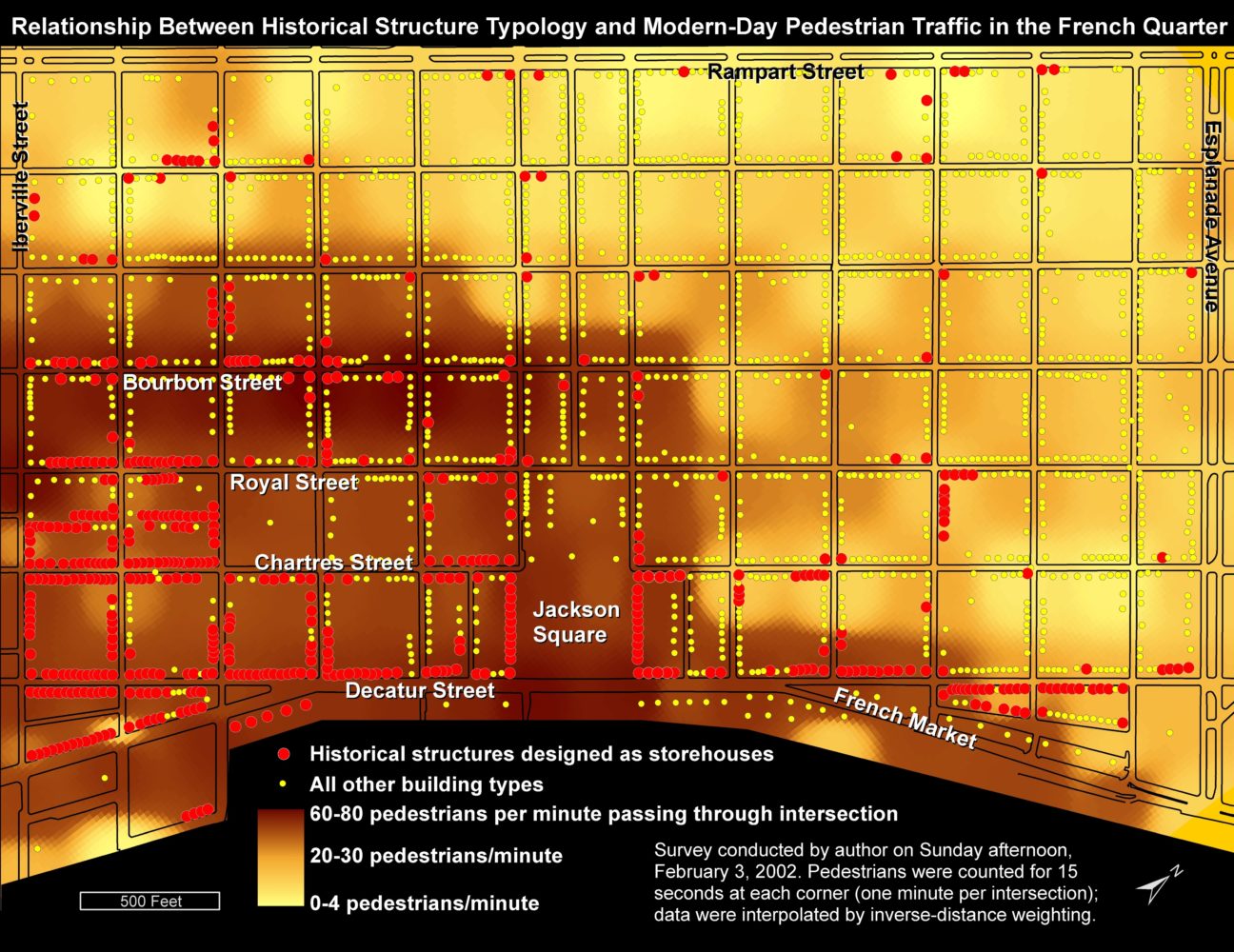 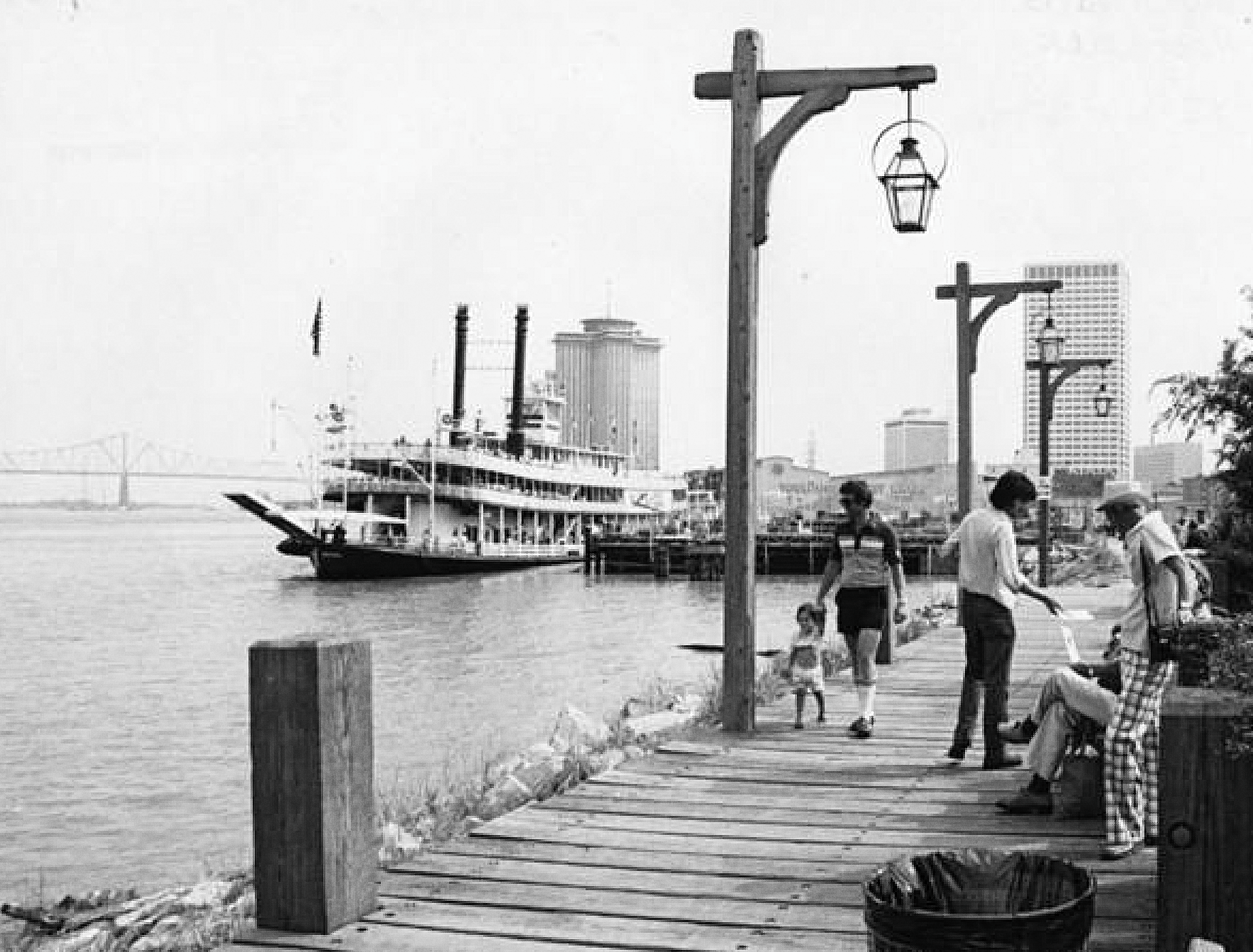 2: The Moonwalk riverfront promenade was constructed in the 1970s. Photo courtesy State Library of Louisiana.

What explains the French Quarter pedestrian “dogleg?” The pattern has proximate and ultimate causes. The proximate drivers are three-fold. First, since the 1969 ban on new lodges in the Quarter, high-rise hotels arose along lower Canal Street in the 1970s, in the Central Business District in the 1980s and 1990s, and in the Warehouse District in the 2000s. This put thousands of visitors in a position to enter the Quarter through the lower blocks of Canal Street, where tourism operators eagerly awaited to sell them the New Orleans experience.

Second, the transformation of the French Market from a farmers’ and fish market to a “festival marketplace,” which occurred during 1973 through 1975, followed by the opening-up of the riverfront (starting with the Moonwalk in 1976), gave tourists a subsequent destination after taking in the must-see sights around Jackson Square.

Thirdly, new policies made certain spaces more pedestrian-friendly. Auto traffic and parking around Jackson Square ended in the 1950s. In the 1960s and 1970s, Bourbon Street transformed from a strip of burlesque clubs and bars, where most of the action was indoors, to a parade of pedestrians with go-cups in hand, shifting the action to the public space. Additionally, a pedestrian mall policy was put in place on busker-friendly Royal Street, while Jax Brewery and the Decatur Street corridor were revitalized for the 1984 Louisiana World Exposition. All this gave more tourists more reasons to spend more time in the “thigh.” That’s where the commercial zoning was; that’s where most restaurants and retailers were located, and that’s where the action awaited. The quiet residential blocks of the rear and lower Quarter, on the other hand, offered lots to see but little to do. The masses responded with their feet, thus spontaneously forming the dogleg pattern.

But what of the ultimate causes of this pattern? Why are land uses in the “thigh” zoned commercial, and why did tourism commerce find a home there and not elsewhere? The answer, I believe, is in the architectural typology and, relatedly, the economic geography, of times past. 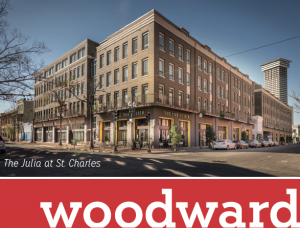 Typology, or type, refers to the underlying form, shape, orientation and layout of a building — what John Michael Vlach called “a philosophy of space, a culturally-determined sense of dimension.” Style, on the other hand, describes the outward fashion and embellishment of a structure. Whereas there are roughly 30 architectural styles represented in the French Quarter, there are far fewer architectural types. By my count, 81 percent of French Quarter buildings fall into just four typological categories: cottages, shotguns, townhouses and storehouses.

If we map out the 2,244 street-facing structures of the Quarter by type, we see cottages and shotguns prevailing in the historically more working-class rear streets (namely Burgundy) and lower blocks (such as Gov. Nicholls and Barracks), and townhouses in the historically prosperous heart of the Quarter (such as along Royal and Chartres). These three types were originally built for residential occupancy, not commerce.

Storehouses, on the other hand, are by definition commercial: they are multi-story brick structures, often set in rows with shared walls, designed for commercial purposes on the ground floor and either residential or commercial (including offices or storage) on the upper floors.

If we map out the 480 storehouses of the French Quarter and overlay them with the neighborhood’s modern-day pedestrian geography, they correlate quite well. Fully 83 percent of these historically commercial buildings fall within this relatively small modern-day commercial area, where, I had tabulated in my street survey, nearly 70 percent of Quarter pedestrian activity occurred.

So people in the 2000s tended to spend most of their time where storehouses had been built in the 1800s in the greatest concentrations. I don’t think this is a coincidence. The upper and riverside tiers of the Quarter have for centuries hosted most of the district’s commercial activity — merchants, retailers, wholesalers, professional offices — and that called for storehouses. Those closest to the river lorded over bustling maritime activity, while those adjacent to the French Market took advantage of the emporium’s tremendous foot traffic and cash flow — thus more storehouses. Additionally, as Canal Street transformed to a retail district starting in the 1840s, it had a spill-over effect onto the upper Quarter, particularly the blocks closer to the river, and thus ever more storehouses went up.

These drivers had far less impact on the rear and/or lower blocks, where, logically, residential typologies prevailed — opulent townhouses in the prestigious heart of the Quarter, and cottages and shotgun houses in the more working-class rear and lower blocks. (Of course, exceptions abound; one can find a humble abode in the heart of the Quarter and a splendid mansion in the rear. But these should not distract from the deeper meaning revealed in relative proportions and general predominations.)

When land-use zoning came into play in the 1920s, planners drew lines around traditionally commercial and residential areas and officially coded them as such, thus reifying past economic geographies — and along with them, part architectural decisions — thus parlaying them into future economic geographies.

So what is the ultimate explanation for the modern tourism “dogleg”? I believe it’s because the storehouse typology is best suited to host business such as retailers, galleries, restaurants and bars, as is the zoning, and both of these phenomena are explainable by the aforementioned historical economic geographies.

True, some townhouses, cottages and even shotgun houses have been converted to stores and offices, and in recent years, tourists have increasingly ventured into adjacent areas, outside the dogleg and far beyond the French Quarter. Driving this emerging tourism geography are phenomenon such as special-interest walking tours, Segways, rentable Blue Bikes, pedicabs, ride-sharing, short-term rentals, gentrification, new streetcar lines and the city’s “Follow Your NOLA” marketing campaign, encouraging visitors to spread out.

Yet, generally speaking, millions of tourists still spend most of their time in the French Quarter, and most of that time is spent in the dogleg. In this way, the past endures in ways those millions of pedestrians may not fully realize, as we eagerly await their return to the streets of New Orleans. 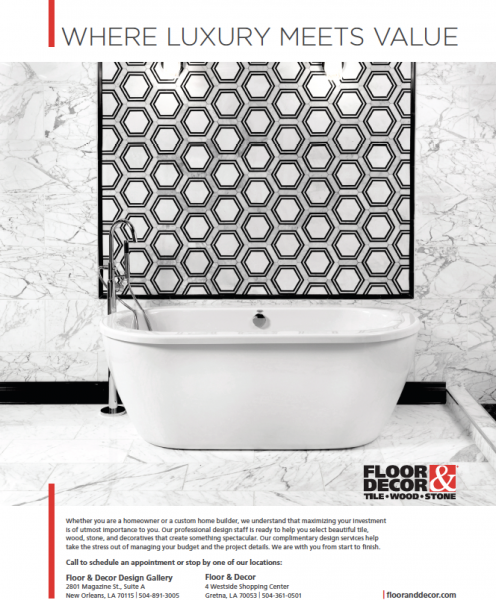 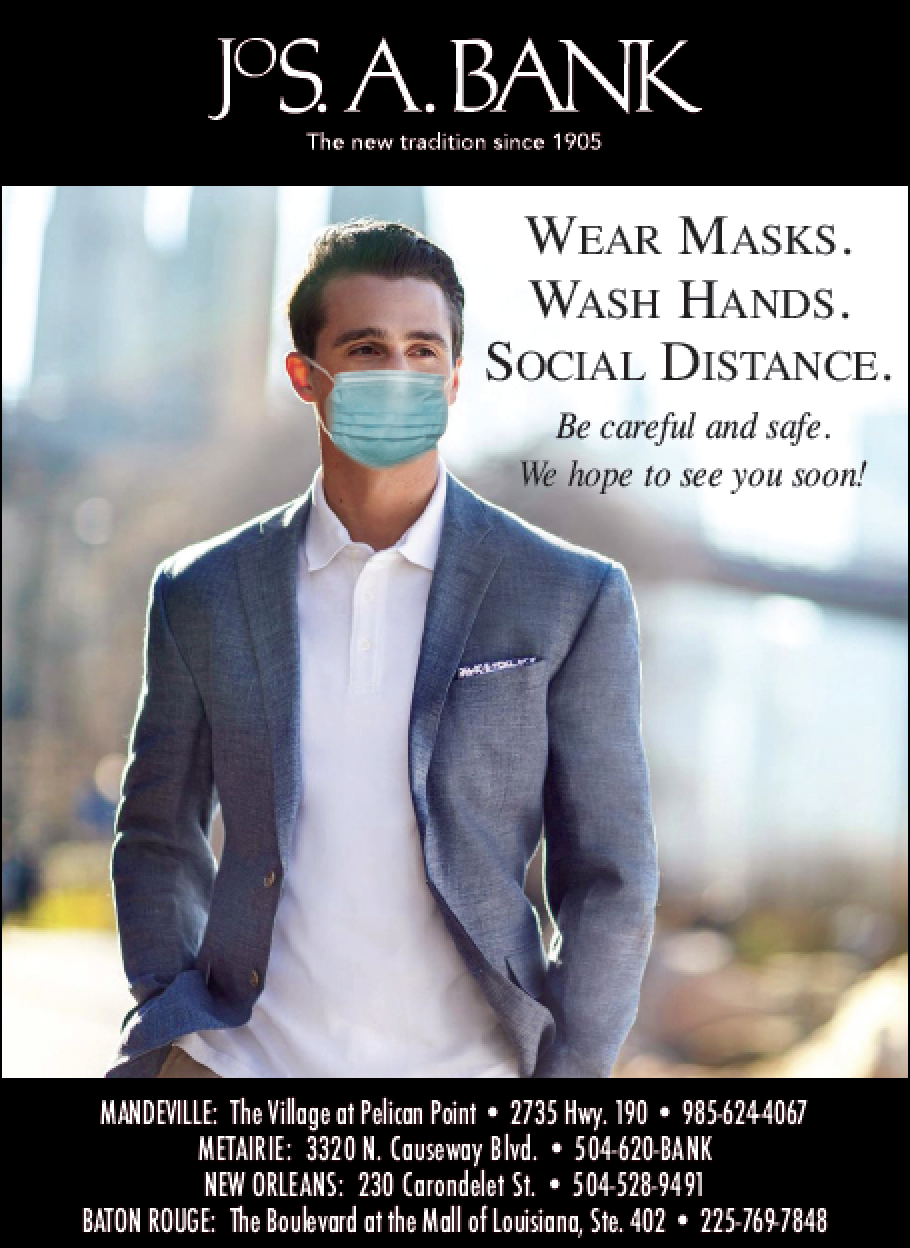