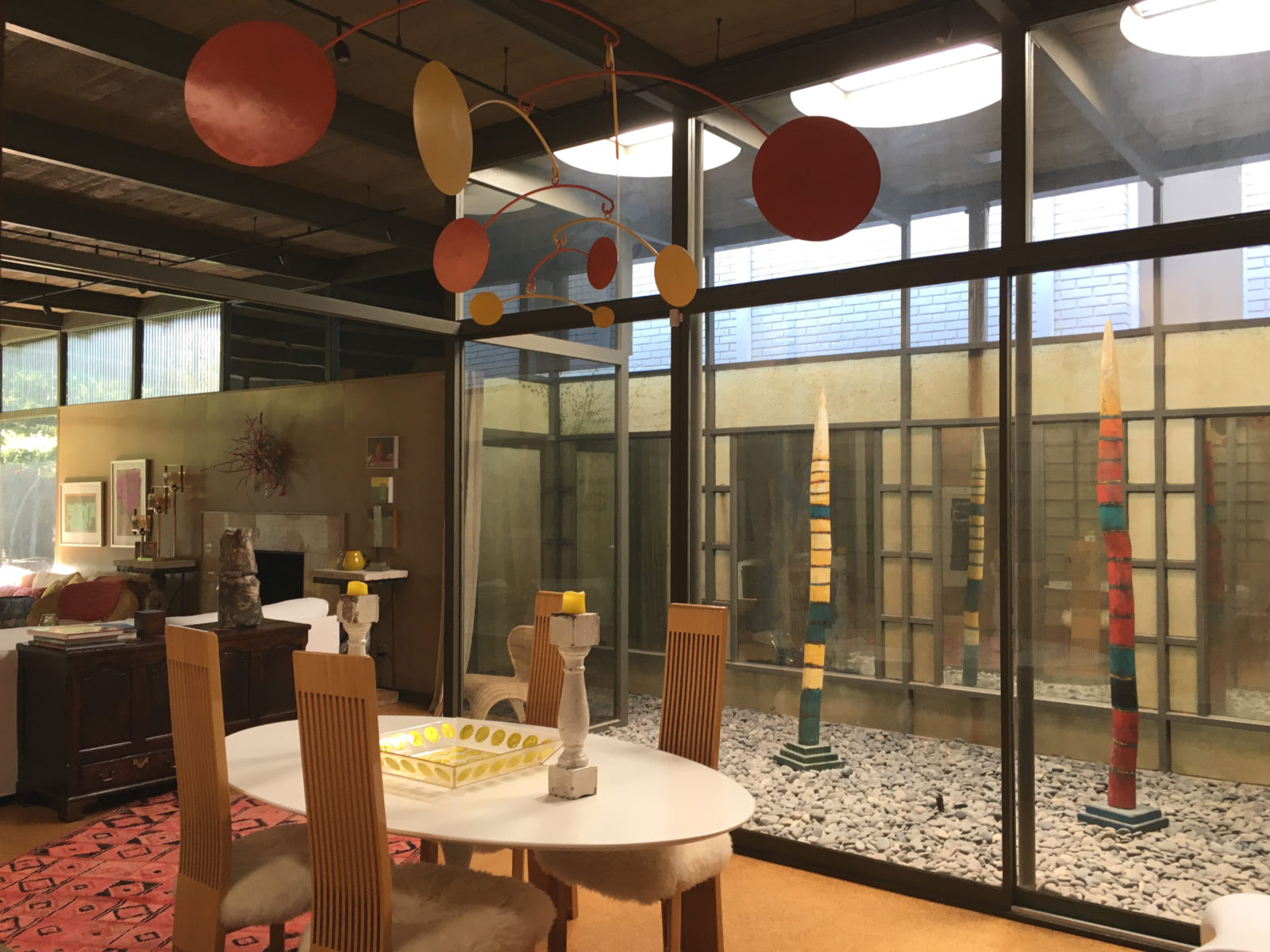 In the mid 1950s, four couples were house-hunting for new homes in New Orleans’ Uptown neighborhood. When none of them found their dream abode, they decided to band together and build an enclave of Mid-Century Modern-style homes on Dominican Street.

The group collectively bought a quarter of the block bounded by Domini­can and Cherokee streets, and then divided it into five lots. Four homes for the four families were then built on the lots; the fifth lot was later absorbed by attorney Thomas Lemann into his lot at 7507 Dominican St. The four houses were planned simultaneously, with plenty of cross-referencing amongst archi­tects, owners and neighbors.

The homes differed in appearance and massing, but all were built in the Mid- Century Modern style, featuring wide expanses of windows, panels, skylights, and other features typical of the residential design style that was cutting edge at that time.

The Preservation Resource Center, in partnership with the New Orleans Architecture Foundation and DOCOMOMO US/Louisiana, is thrilled to feature three of those four homes on a special block tour this July 20 as part of the Mid Mod NOLA event series taking place throughout the summer. Generously opening their homes to the public for this event are Mrs. Edward Heller at 7507 Dominican St., Jessie and Beau Haynes at 7515 Dominican St. and Deborah Valentine at 7521 Dominican St.

“My favorite thing about the house is the amount of light in every room,” Mrs. Edward Heller said about her home at 7507 Dominican St. “Glass walls seem to invite the outdoors. In an era when dark, gloomy Victorians were sought after, this house was very unusual.” She and her husband purchased the home from the original owners, the Lemanns. Mrs. Heller had the home professionally decorated by Ann Dupuy and Ann Holden; also present in the home is art by her late husband Edward, who was “a distinguished lawyer but also a gifted artist.” He designed the dining room table as well as numerous plaques for the brick walls outside. Another feature for visitors to note is the backyard patio, which was designed by Robert Royston, a prominent designer on the West Coast in the mid-20th century.

Jessie and Beau Haynes bought their chic abode at 7515 Dominican St. after undertaking a huge home renovation on Jefferson Avenue. Despite the tim­ing, “We always said that if a Mid-Century Modern-style home Uptown ever came on the market within our price range, we would try to make it happen,” Mrs. Haynes said. She and her husband saw the home featured on Curbed.com, toured it the next day, and were soon its new owners. The couple has undertaken restoration projects across the property in their year residency so far, including a complete restoration of the home’s wooden walls, built-ins and panels, repairs to the roof and electrical system, cosmetic improvements and, outside, a landscape overhaul. The guesthouse in the back yard will soon undergo a renovation as well.

The couple’s favorite part of the home is “the dichotomy between its beautiful, shady Uptown location surrounded by traditional, historic New Orleans architecture, and the modernist/unique nature of its design and architecture. We love that the home is architecturally significant, and we consider ourselves to be stewards of its care and thoughtful maintenance,” they said. Their favorite architectural feature is the two-story formal living room and dining area. Tour patrons should look for interesting art and pe­riod furniture pieces throughout the home; outside, enjoy the inviting koi pond in the back yard.

Deborah Valentine had seen an article about 7521 Dominican St. after the home had already sold to a new owner, and she was dismayed at the timing. “I was so sad to not have been the one to buy it,” she said. “So when it came back on the market several months later, I knew it was meant to be and we snapped it up. The house really just spoke to us.” She and her husband love the open floor plan and the element of surprise that walking inside holds. “From the street it doesn’t look like much,” she said. “I love that it is such a surprise to walk into.” Mrs. Valentine loves Moroccan rugs, as visitors will note, and she finds serenity in watching the pool from the inside of the home, through the large expanse of glass windows.

The house had previously been owned by architect Lee Ledbetter, and he is now helping the Valentines undertake renovations. Mr. Ledbetter will speak at the home, touching on its history and that of others on the block, as part of Mid Mod NOLA block tour on July 20. The tour, which lasts from 6 to 8 p.m., will offer access to all three homes, complimentary mid-mod cocktails, and inspiration for those who love clean, modern style. Tickets cost $20 in advance for PRC members, $25 for non-members. Tickets at the door the evening of the event cost $25 for everyone.

Get advance tickets for the Mid-Mod block tour HERE!