Two New Orleans neighborhoods have been named Louisiana cultural districts, a state designation that can unlock financial incentives for the people who live and work in those communities. Across Louisiana, there are now 115 cultural districts, including 27 in Orleans Parish, one in Arabi and one in Gretna. The benefits to property owners in those areas can include access to tax credits, while artists are eligible for local sales tax exemptions on original artwork.

Residents of the two new districts in New Orleans — the A.P Tureaud-7th Ward and Touro-Bouligny — had reached out to the Preservation Resource Center in recent years about the possible benefits of achieving cultural district status for their communities. Those neighborhoods are located on the downriver (eastern) portions of the historic 7th Ward between St. Bernard and Elysian Fields avenues and the Touro-Bouligny neighborhood between Napoleon Avenue and Delachaise Street. In an ongoing effort to make sure that preservation incentives, such as tax credits, are equitable, PRC staff worked with community leaders in these areas to initiate the districting process this past spring.

Both neighborhoods were surrounded by existing cultural districts. Despite differences in size and demographics, the two areas have something else in common: each is home to a historic school building that NOLA Public Schools intends to auction or trade. A closer look revealed more commercial buildings and apartments that could be renovated and put to new uses. PRC’s staff was already in dialogue with community members about the preservation of the historic school buildings (one vacant since Hurricane Katrina, the other in use but slated for closure). Building on these relationships, the PRC provided information to neighborhood associations and residents about the potential value of cultural district designations as well as assistance in the nomination process. After community-based organizations voiced support and willingness to take the reins, PRC began compiling the required materials.

This summer, PRC officially submitted the nominations to the state, and last month, Lt. Gov. Billy Nungesser and the Office of Cultural Development’s Division of the Arts announced the new cultural district designations for the A.P. Tureaud-7th Ward and Touro-Bouligny.

The primary goal of cultural districts, according to the state, is “to spark community revitalization based on cultural activity through tax incentives, technical assistance and resources.” As a result of this new designation, historic properties in the Touro-Bouligny and the A.P Tureaud-7th Ward neighborhoods could be eligible for the State Commercial Tax Credit, making this important preservation tool available to more residents across New Orleans.

This isn’t the first time PRC has helped establish a cultural district. PRC staff collaborated with City Council District A, then held by Susan Guidry, to successfully establish the Carrollton-Hollygrove Cultural District.

The proposed district encompasses eastern portions of the historic 7th Ward not included in the existing Treme-7th Ward Cultural District. It is bisected by A.P. Tureaud Avenue, named for attorney Alexander Pierre Tureaud, whose nearby home is listed on the National Register of Historic Places in recognition of his key role in the civil rights movement. The streets bounding the proposed district are Claiborne Avenue, St. Bernard Avenue, Gentilly Boulevard and Elysian Fields Avenue. Interstate 10 passes through the southern portion of the proposed district, and Interstate 610 passes through the northern section. Every day thousands of people pass through the proposed A.P. Tureaud-7th Ward cultural district on one of New Orleans’ two major interstates, gazing across rooftops that antedate the expressways. Some residents of the area are likely descendants of the artisans, craftspeople and culture bearers who built and populated this lively African-American community in the late 19th and early 20th centuries. The community spread north and east with the rise of the automobile, and eventually the interstates cut through the neighborhood altering its residential fabric but not its soul.

The community encompasses an area that has long been associated with African Americans, particularly Creoles of color, involved in the building trades. These artisans and craftspeople are credited with constructing buildings in the French Quarter, Esplanade Ridge and Uptown. On evenings and weekends, they constructed or added to their own homes in the 7th Ward, often bartering skilled labor with their neighbors.

By creating this new cultural district, rather than expanding the existing Treme-7th Ward Cultural District, resources will be focused on an area that has endured significant disinvestment beginning with the imposition of the interstate and exacerbated by Hurricane Katrina. Core institutions like St. Augustine High School, the Autocrat Club and New Orleans Delta Foundation operate within the proposed district footprint but have constituents citywide, which can help draw attention and investment to the area. The idea to nominate the area as a cultural district began with conversations between the Preservation Resource Center and NewCorp, a nonprofit community development organization that provides technical and financial assistance to small and emerging businesses. The PRC created an informal advisory committee to include representatives of the Historic 7th Ward Neighborhood Association, Louisiana Creole Research Association, the Delta Foundation, St. Augustine High School and the Autocrat Club, a social and pleasure club incorporated in 1914 to provide a safe space for members to gather during the Jim Crow era.

“This proposal (of a new cultural district) aligns with the vision of our organization that our history and culture is preserved, understood and shared around the world,” the Louisiana Creole Research Association’s Board of Directors wrote in a letter of support. “Many of our members, over 200 nationwide, can trace their family origins to the 7th Ward or as we say in New Orleans were ‘born and raised.’”

“As a native of New Orleans, the 7th Ward was my home, and I was educated, nurtured and constantly exposed to art, music, literature and history by fantastic women and men who were neighbors and friends,” wrote A. P. Tureaud, Jr., son of the civil rights attorney who will be the district’s namesake. “The ‘7th,’ as we called the ward, was a village of culture icons who stressed family, education, history, religion, art and community improvement and participation in the long struggle for equality.”

1: Autocrat Social and Pleasure Club, organized in 1907 and incorporated in 1914, has served its community as a hub for civic and political activism and civil rights meetings during the 1960s, as well as a site for social entertainment and cultural growth.   2: St. Leo the Great Catholic Church was designed by noted Black architect Paul Gilbert Charbonnet, Jr. (1919-1984). The parish hosts a youth ministry, a drive-through food bank and a fish fry every Friday in Lent.         3: St. Augustine High School, founded in 1951 for African-American boys, has been a prominent academic institution and driver of civic leadership in New Orleans and the South throughout its history. Photos by Lynette Dolliole Johnson. Whether watching Carnival parades on Napoleon or St. Charles avenues or visiting a doctor at Touro Infirmary, thousands of people pass through the Touro-Bouligny neighborhood every year, likely without even knowing it. The community is a tight-knit neighborhood bounded by thoroughfares and commercial corridors. The proposed cultural district will showcase the neighborhood within the larger fabric of historic Uptown New Orleans, and a cultural district designation will help Touro-Bouligny distinguish itself as a live-work destination.

A majority of the businesses operating within the proposed district are medical facilities surrounding Touro Infirmary, founded by philanthropist Judah Touro in 1852. The hospital relocated to the district in 1882 and now constitutes a complex of neoclassical, art deco and mid-century modern style buildings. Restaurants are clustered near these medical facilities and along the major thoroughfares. Several restaurants double as music venues, as do multiple houses of worship. Artist studios and galleries, performance and recording spaces, and arts supply retailers are all compatible with the district’s vision of diversifying the number of neighborhood-serving businesses without compromising its character or quality of life. The neighborhood is home to many religious institutions, including Touro Synagogue, Rayne United Methodist and Unity New Orleans, as well as schools, including Audubon Elementary at McDonogh No. 7 School and St. Stephen Elementary School.

A proposal, now on hold, to close an elementary school and transfer the building to the local housing authority generated significant community concern two years ago. Fear that the historic school would be demolished galvanized the neighborhood and caused many to recognize the need for an organized effort to cultivate community partnerships and civic engagement.

“We strongly believe that creating this new district will be a boost to the development of the arts and culture in the immediate area and surrounding neighborhoods, and will also help preserve the history of what makes New Orleans special,” wrote Zachary H. Kupperman of the Kupperman Companies, a real estate development and investment firm, in a letter of support. “We also fully support the potential impact that the new district will have on economic development, neighborhood community building, and investment in small business and the arts.”

1: This house on Coliseum Street with Eastlake millwork on the porch and dormer is approached through an arched gate bearing the name Rose Wood.    2: McDonogh No. 7 school was designed by William A. Freret in 1876 using the gothic revival style.   3: Many of the area’s large Queen Anne-style homes, like this one with a distinctive turret, are now rented in part or whole.   4: Touro Synagogue bookends the district along with Touro Infirmary, both named for philanthropist Judah Touro.

The A.P. Tureaud-7th Ward Cultural District nomination benefited greatly from the involvement of Lynette Dolliole Johnson, a PRC volunteer with deep roots in the neighborhood and professional experience in journalism and preservation. Dolliole Johnson took on the project with gusto, not only transforming a spreadsheet and rough draft into a compelling application but building a groundswell of support in the 7th Ward. 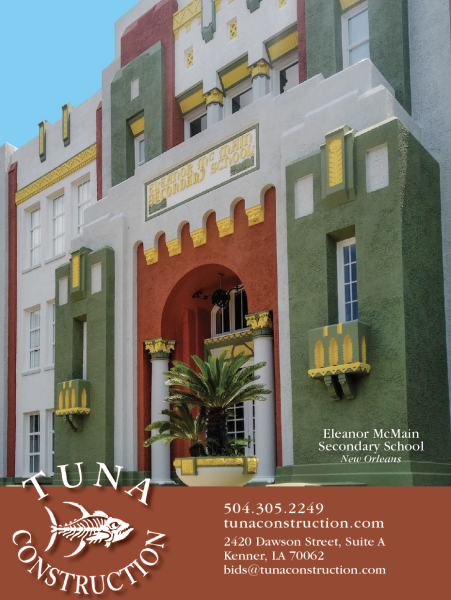