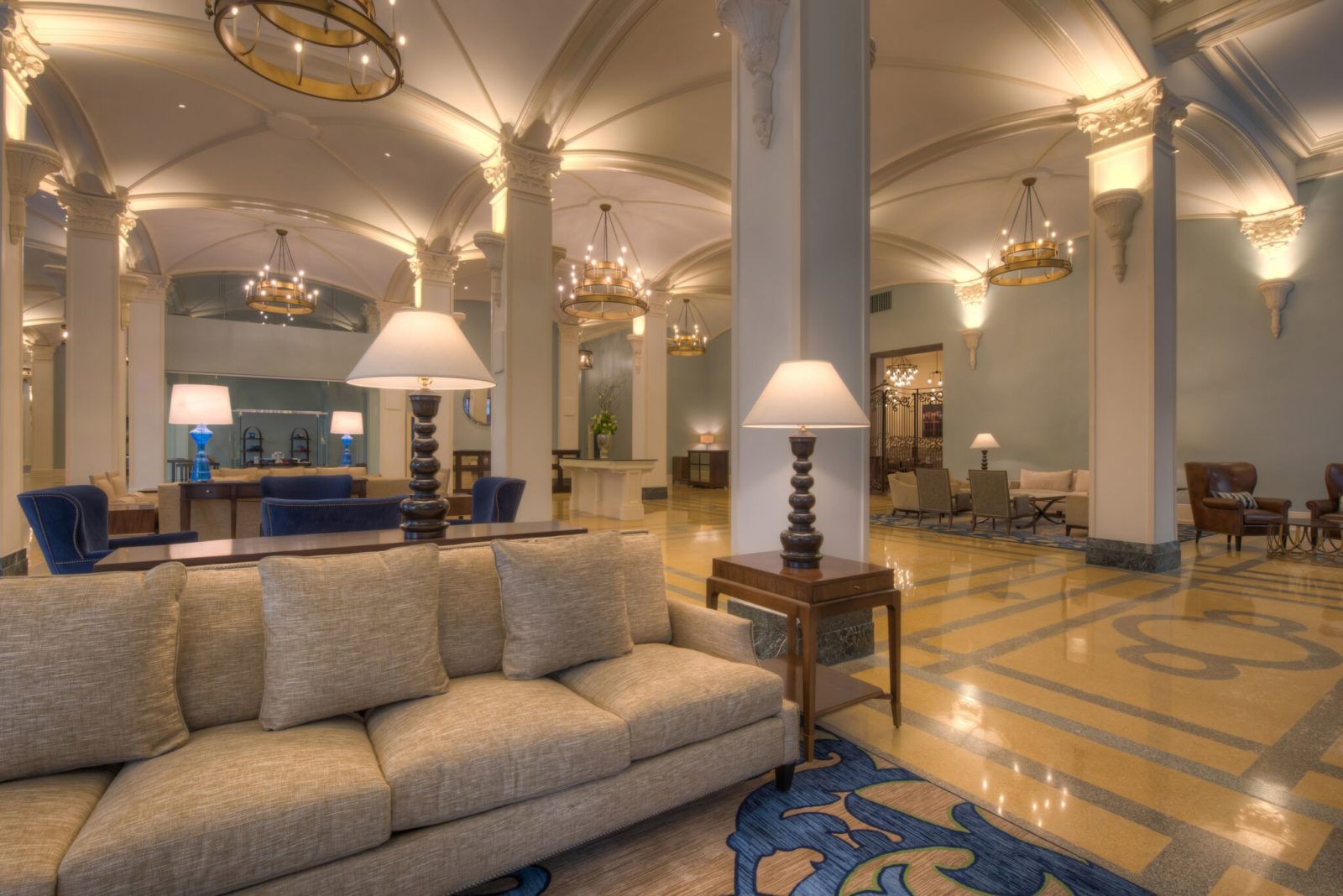 Hotels are Hot: Tourism is flourishing in New Orleans, and savvy inves­tors have been turned onto the idea that revitalizing historic buildings for lux­ury accommodations — and utilizing historic tax credits to do so — is smart business. New Orleans’ Central Business District has seen a mini-renaissance of late with long-abandoned buildings seeing new life as posh inns, and the latest example is perhaps one of the most grand. The past headquarters of the New Orleans Public Service, Inc., the predecessor of Entergy New Orleans, has been transformed into a 217-room luxury hotel on Baronne Street. It of­ficially opened for business this past July 6 as one of Forbes Travel Guide’s “13 Most Anticipated Hotel Openings of 2017” — a list that includes luxury accommodations worldwide.

Connecticut-based developers Building and Land Technology purchased the unoccupied building in February of 2015 for a reported $11.6 million after it had remained vacant since 1992. This purchase extended to the adjoining Jackson Homestead Association building and the Dryades Building, a ware­house space built as a rear extension of the NOPSI headquarters.

Local firm Woodward Design + Build was hired to transform the three properties into a luxury hotel to be managed by Salamander Hotels & Resorts.

Shelia Johnson, co-founder of BET, professional sports franchise owner and philanthropist, founded Salamander Hotels & Resorts in 2005 and is the current CEO. The NOPSI Hotel is the first property within the Salamander portfolio of hotels to be located in New Orleans. “Over the years Salamander has looked at specific restoration projects throughout downtown New Or­leans,” said Prem Devadas, president of Salamander Hotels & Resorts. “NOP­SI stood out because it allowed us to have the right number of rooms, spectac­ular event and meeting spaces, a signature restaurant, and a well-positioned rooftop pool and bar. All of these elements enabled us to achieve our goal of opening one of the finest hotels in the South.”

Since the construction of the eight-story New Orleans Public Service, Inc. building in 1927, its history was intrinsically tied to the story of New Orleans’ past. As explained in a November 1927 Times-Picayune article, “The Crescent City Light Company and the Jefferson City Light Company merged in 1874, succeeding the New Orleans Gas Light Company and to last until re-organi­zation came in 1922 when the gas company took the name of New Orleans Public Service, Inc.” Generations of New Orleanians entered its grand lobby to pay their electric bills, start or stop utility service, and attend to various other company-related tasks. The footsteps of those generations can now be seen in the wear impressed upon the original terrazzo tile floors throughout the main lobby of the hotel.

Prior to the construction of their new headquarters, designed by the archi­tectural firm of Favrot & Livaudais, Ltd, NOPSI was headquartered a block-and-a-half away on Baronne and Common Streets. Referring to the new building, a Times-Picayune reporter on September 10, 1927, wrote, “All told it undoubtedly will be the best equipped structure in the South devoted(ly) exclusively to housing a corporation.” That reporter was not overreaching in his statement: Just two years before the Wall Street crash of 1929 would launch the country into the Great Depression, the state-of-the-art building was con­structed at a cost of $1,216,599.

The exterior of the building was clad in buff Indiana limestone and light pressed brick, and designed in what the architects referred to as the “mod­ern Renaissance style.” The exterior also showcased a new addition to the landscape of New Orleans commercial buildings: The debut of the modern show window, which incorporated three different colors of strip lights, border lights, spotlights and disappearing foot lights, all controlled by a bank of dim­mer switches, allowing for a number of lighting combinations fitting for an electric company.

Electricity played a key role in the design of the interior, as well. “Mr. Smith,” a NOPSI representative, told the Times-Picayune in 1927, “According to plans for this building, hidden incandescent lights will flood every apart­ment. Lights will be so well concealed that it will be almost impossible for casual observers to determine from where the light comes.” After studying the benefits of indirect lighting in the workplace, Favrot & Livaudais designed the upper floors of the building to be illuminated entirely with indirect light­ing. Artificial lighting was utilized only at night by laying out the workspaces so that every desk had access to natural light and ventilation during the day through the ample amount of windows present on the facades of the building.

Besides new and revolutionary ways of utilizing electricity, the building also showcased other technological advancements of the day. An automatic telephone switchboard handled all calls made into and out of the building; automated signal controlled elevators stopped on each of the eight floors without the need for an attendant; the walls had Acousti-Celotex sound buffering treatments; a pneumat­ic tube system allowed for transferring documents; and a dictograph or private phone system allowed for private interdepartmental calls. In addition, an x-ray room was installed on the fifth floor for use by the medical department.

A committee of four company executives who worked closely with the original architects carefully planned the placement of each department within the building. The executive offices and public classrooms were located on the eighth floor; the other upper floors were dedicated to the various departments of the corporation; and the first floor housed departments that were in closest touch with the public.

The original plans for the building included 12 stories, only eight of which were actually built. This anticipated height prompted Favrot & Livaudais to use a wood pile and reinforced concrete foundation along with steel frames to support the structure. Dealing with the structural design and construc­tion of the floor was what landed Woodward Design + Build the contract for the NOPSI Hotel project. The original subfloor consists of hollow tile arches and steel beams utilized in order to conceal the ceiling support beams, and allowing for hidden support systems within the vaulted ceiling of the grand first floor. With the advantage of being a licensed general contractor with in-house architectural and engineering capabilities, Woodward Design + Build was able to devise a solution to cut out portions of the subfloor to allow for ductwork without compromising its structural integrity, and in such a way to stay within the budget of the project.

In a similar vein, as not to break the original design intentions of the first floor, with its impressive 21-foot-high vaulted plaster ceiling, the design team devised a plan to run the branch lines for the electric and water sprinklers from above. This involved pouring a false floor on the second story, which brought its ceiling height down to eight feet. By dropping the lines down through the ceiling, the team was able to stay within budget and ensure that the lobby remained close to its original 1927 appearance.

When the building was acquired by Building and Land Technology, many of its original features were in poor condition. Favrot & Livaudais had de­signed the first floor to be lighted entirely by indirect lighting reflectors con­cealed within plaster sconces attached to columns throughout the lobby. In 2016, only a few of these original sconces remained, so exact replicas were cast in resin fiber from the originals by Rambusch Lighting, based in Jersey City, NJ. Parts of the plaster column capitals and medallions were recast locally by New Orleans Metalwork, the subcontractor for the interior plasterwork, including the cornices and vault ribbing.

Tom Abernathy, Project Executive, and Todd Pierce, Project Superinten­dent of Woodward Design + Build, said that by working with the Louisiana State Historic Preservation Office (SHPO) and the New Orleans Historic District Landmarks Commission (HDLC), the project was able to qualify for historic tax credits and stay true to the original design intentions of the buildings. This included working closely with the HDLC to ensure that the 9th-floor addition followed line-of-sight guidelines. They were able to trans­form the original elevator housing into a new penthouse suite and add drain­age pipes and a swimming pool by devising a pedestal paver flooring system, which utilizes two-foot by two-foot paver stones raised 20 inches from the subflooring of the 9th floor.

They were also able to salvage 95 percent of the building’s original win­dows, allowing for the exterior of the building to remain true to its historic appearance. The team worked hard to keep as much of the first floor intact as possible. Small air-conditioning units are hidden throughout the building so that a major electrical room would not obstruct the space. Through all the delicacy of the design and numerous logistical challenges, “the biggest chal­lenge to the project was it being located downtown with no spare space to work,” Abernathy said.

The Dryades Building is located to the rear of the main NOPSI building. The building has been completely transformed from an industrial warehouse and substation to an elegant event space and ballroom with exposed brick and mas­sive windows. Woodward Design + Build lowered the raised workspace floor, which originally had storage space underneath, and poured a new slab founda­tion. They retained all of the original windows but had them reglazed to make them more energy efficient, and performed lead abatement to the beams and masonry before clear coating to preserve some of the historic patina. They also incorporated a 24-foot steel crane, once used to move electrical transformers, into the space as a design element and nod to the building’s past.

Once a separate building, the old Jackson Homestead Association head­quarters located next to the NOPSI building at 311 Baronne Street is now accessible through the main hotel lobby and is home to Public Service, a restaurant dedicated to the contemporary cuisine of the Gulf Coast. “The original curtain wall fronting this building was not salvageable, but we were able to make a replica of it,” Pierce said. The two-story building, when pur­chased, was in such a state of disrepair due to a past collapse that it had to be essentially rebuilt. The new structure follows the same footprint as the origi­nal. In 1965, New Orleans architectural firm of Saputo & Rowe extensively remodeled the building. Prior to that time it had been part of the neigh­boring Labiche’s department store. The original curtain wall was installed during that renovation of the space, and it was remarked upon during its 1965 grand opening ceremony as being a “dramatically different (banking space),” according to a Dixie Magazine article from that same year.

Signs of NOPSI’s past are present practically everywhere in the hotel. “A historic hotel features architectural detail that simply cannot be replicated in today’s modern construction, and sets the stage for one-of-a-kind luxury experiences,” said Salamander President Prem Devadas. “Not only do guests of a luxury, historic hotel get to experience the comforts they expect, but they get to explore numerous stories that help make the stay more memora­ble. The collection of memorabilia at NOPSI Hotel from old NOPSI workers is an example of helping make this possible.” As part of the hotel’s commit­ment to honoring its past they are actively seeking NOPSI memorabilia to display throughout the building. Within the hotel’s growing collection, the stories of the employees of NOPSI come alive through photos, ticket stubs, ID badges and the like. Their story is part of a larger one that lit up New Or­leans for decades, that allowed for the public to be transported throughout the city via streetcar, and that brought with it major technological advance­ments to how the citizens of New Orleans lived their lives. Today, visitors to the city are leaving their own marks upon the NOPSI lobby floor, their footprints another layer added to the rich past of the city, a past discoverable through our architecture and preserved memories.