IN 1788, the people of New Orleans endured a series of catastrophic events resulting in significant loss of life. A massive fire swept through the city, destroying over 80 percent of the buildings and killing many people. This was followed by a flood, then a devastating Yellow Fever epidemic. As a result, the Saint Peter Street Cemetery, founded in 1723 and located near the intersection of modern-day N. Rampart and Toulouse streets, quickly filled to its capacity.

Along with the distinction of being the oldest surviving cemetery, Saint Louis Cemetery No. 1 was the first New Orleans cemetery to practice above-ground burials. Above-ground burials are thought by many to have primarily been a solution to the problem of burying the dead in a region with an extremely low water table.

When walking through any of the Saint Louis cemeteries, visitors encounter the final resting place of many of the most prominent citizens in New Orleans’ history, as well as the not so prominent. Buried in these tombs are the remains of the rich and the poor, the famous and the infamous, those that died in battle and those that died battling disease. The most famous (or infamous) of these is the tomb of acclaimed Voodoo Queen Marie Laveau. Located in Cemetery No. 1, the Marie Laveau tomb attracts thousands of visitors each year.

While the Saint Louis cemeteries are popular tourist attractions, they are also valuable historic resources, serving as documentation of cultural traditions. They highlight the unique architecture and artistry of the tombs, many of which are signed by stone carvers, much like an artist signs his paintings. Researchers study the inscriptions on closure tablets, revealing important information on topics such as the spread of disease, allowing the mapping of the spread of Yellow Fever during an epidemic. Genealogists use inscriptions in their research of family histories since many of these tombs pre-date state and parish records. Without preservation, these links to the past are at risk of being lost forever.

Cemetery No. 1, with its popularity as a tourist attraction, and being the oldest of the three cemeteries, has benefitted from these distinctions and received some preservation attention. The Dead Space Project, a restoration program undertaken in 2001 by University of Pennsylvania faculty and students, Save Our Cemeteries and the Archdiocese have made an effort to preserve some of the most at-risk tombs, and since March 2015, public access to the cemetery has been restricted to only those on guided tours. Although vandalism has decreased, even with this intervention, the cemetery still shows extensive deterioration.

Cemetery No. 2 is in the worst condition with respect to deterioration. Many of the tombs are abandoned, some with conditions already beyond repair or restoration. With restricted access to Cemetery No. 1, the number of visitors to Cemetery No. 2 has increased. Unfortunately, these additional visitors can also bring with it increased damage.

Cemetery No. 3 is in the best condition of the three. This appearance may be due to its layout. The avenues through the cemetery are much wider than cemeteries 1 and 2, giving the impression of openness and space. However, there still remains many 19th-century tombs that are abandoned or neglected. Like its two companions, Cemetery No. 3, even with its appearance of relative newness, is in need of preservation efforts to protect its future.

These cemeteries tell the story of New Orleans — a mixture of Catholicism, jazz, art, politics and Voodoo. By protecting them, the culture that is New Orleans will remain alive for future generations.

Threats to Their Survival

Throughout their long history, the Saint Louis cemeteries have been impacted by many threats including abandonment, vandalism, neglect, improper maintenance and repair, and the harsh New Orleans climate. While some have a greater impact than others, all of these issues are reflected in the current condition of the cemeteries.

According to Sherri Peppo, executive director of the New Orleans Catholic Cemeteries, abandonment and neglect are the most serious threats to the cemeteries. Tombs become abandoned or neglected when family members no longer care for tombs or use the tombs for new burials. This can be because entire families have moved away, there are no living family members left, families may be unable or unwilling to care for tombs, or families are unaware that there is a family tomb. As a result, the tomb continues to deteriorate, eventually succumbing to the elements or vandals.

Like most cemeteries, the Archdiocese considers tombs to be the private property of the families that had them built. As a result, they are not responsible for their upkeep or preservation. Unless a family has purchased perpetual care, which only provides periodic cleaning and minor repairs, the Archdiocese does not maintain the tombs. In the case of abandoned tombs, the Archdiocese typically does not intervene with any repairs or preservation efforts. Exceptions are made for historically significant tombs.

However, there has been some change in this policy. In recent months, the Archdiocese has begun to take measures that may result in the restoration of some abandoned tombs. According to Peppo, the Archdiocese has contracted to have 30 of the over 1,600 tombs in Cemetery No. 2 evaluated for their potential repair and restoration. These tombs will be selected based on the economic and structural feasibility for successful restoration. They have also begun a “Friends of the Cemeteries” program to help fund restoration.

While there are several additional challenges facing the Saint Louis cemeteries, an important and perpetual threat is the use of inappropriate materials and methods when cleaning and repairing tombs. Most of these 18th and 19th-century structures are constructed of locally-made soft brick. The brick is covered with lime-based stucco, and then coated with a breathable limewash. Because of excessive moisture in the ground, which soaks into the brick structures, the stucco and the limewash are designed to allow the moisture to escape, extending the life of the soft brick. For proper maintenance, the limewash should be reapplied as often as every year or two, with the stucco repaired as needed. The use of materials such as Portland cement to replace or repair stucco, or silicone caulk to seal seams, are not only historically inappropriate, but create water-tight barriers that trap moisture in the structure, causing the already soft brick to deteriorate further. Unfortunately, Portland cement and silicone caulk have been used to repair many of the tombs in the Saint Louis cemeteries.

Marble tombs also require special handling. Since marble is a soft stone, cleaning should only be done with water and, if necessary, a gentle detergent. Instead of following this cleaning method, bleach is often used to clean the marble tombs. Bleach will absorb into the marble and cause a chemical reaction that results in a deterioration process called “sugaring,” leaving a loose, sand-like surface on the marble that can be brushed off. The result is nearly irreversible, save for a very expensive process requiring professional intervention that can prevent the “sugaring” from deteriorating the marble more.

One 19th-century marble tomb in Cemetery No. 2 was recently “repaired” by a crew that power-washed the surface, potentially causing damage. Silicone caulk was also used to seal the seams of the tomb, trapping any water that may accumulate. While the tomb may at first appear visibly clean, eventually the use of the silicone caulk may take a noticeable toll.

Keeping the Past Alive for the Future:

It is exciting news that the Archdiocese has plans to examine feasibility of restoring tombs; the more money that is available for this effort, the more tombs could be saved. Many historic cemeteries, like Laurel Hill Cemetery in Philadelphia, raise funds by donations, grant opportunities and reselling abandoned tombs, as well as events and programs designed to include the community. These include “Adopt-a-Tomb” programs and using the cemetery space for fundraising events. The Archdiocese does do some fundraising for tomb preservation through its “Friends of the Cemeteries” program and with fees received from tour companies, but additional fundraising is needed for successful preservation efforts, according to Peppo.

These cemeteries tell the story of New Orleans — a mixture of Catholicism, jazz, art, politics and Voodoo. By protecting them, the culture that is New Orleans will remain alive for future generations. Learn more and donate to their preservation at NolaCatholicCemeteries.org.

View a selection of photographs taken by Charles E. Leche on our flickr page. 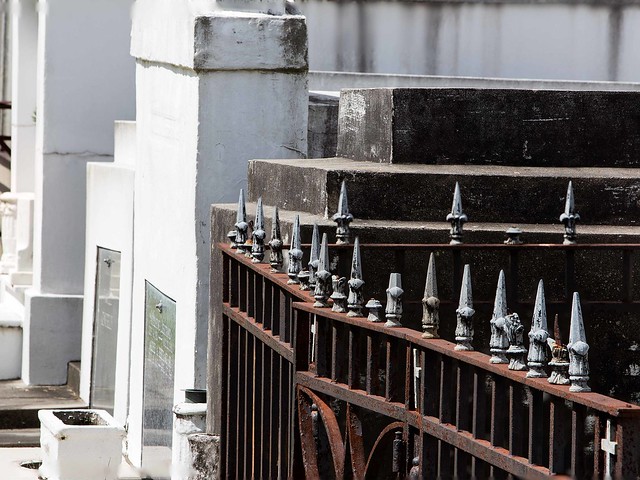