When local powerhouse Bond Public Relations, which recently merged with a national marketing and communications company to become Bond Moroch, contemplated an office move last year, they decided that they needed a space that fit their cutting-edge image.

Simultaneously, the owners of a historic but hidden movie theater on Magazine Street in the Garden District were beginning to take their dilapidated building through a renovation.

The two groups met, and the owners of 3308 Magazine St. teamed up with Bond Moroch’s co-founders Skipper and Jennifer Bond to retrofit the movie theater into the PR firm’s new home. With the help of studioWTA principal Wayne Troyer and architect Alyce Deshotels, and interior designer Alexandra Pappas, the space is now a stunning blend of the historic and minimalist modern. The Garden Theater opened in the 1930s but closed in the 1950s. Still, enough architectural elements remain to lets the building’s history shine: the original tin ceilings were brushed up and cleaned, Troyer said. Wall coverings, including two sections of historic wallpaper and even some plaster, were left in place, as were sections of exposed brick. The coved ceiling where the movie screen originally fit has stayed, as well, and now serves as space demarcation — on one side are offices, on the other, a chic lounge area tastefully outfitted with furnishings by West Elm (a Bond Moroch client). One of the main challenges with the renovation, Troyer said, was getting natural light to fill the 5,300 square-foot office despite the fact that there aren’t windows on the sides of the tall, narrow building. To take advantage of the large windows facing Magazine Street and on the back end of the building, Troyer designed offices to be separated with clear, textured polycarbonsate walls, which allow for privacy while also letting light filter through. The approach is extremely effective, with no part of the office feeling fluorescent, despite the fact that additional lighting, provided by Joule Energy, was of course needed.

Reclaimed heart pine wood floors provided by Robinson Lumber add to the historic warmth of the space, which is nicely juxtaposed with the finishings and furnishings. “We always wanted to make sure the history of the place shined through, but the modern clean lines juxtaposed with the rough historic elements make for great contradiction,” Troyer said.

In furnishing the space, Pappas said she had much to build on. “Bond already had some gorgeous Oriental rugs that I repurposed in two rooms, and they also have an amazing collection of artwork,” she said. The ‘Blue Dog conference room’ is filled with works George Rodrigue, the ‘Jazzfest lounge’ features posters from the festival’s history, and the rest of the office pops alive with color and texture thanks to works on loan from the Jonathan Ferrara Gallery. “We call this the Jonathan Ferrara Gallery Salon,” Jennifer Bond said.

From there, Pappas worked to choose furniture and wall elements that were modern but classic. She largely kept walls clean to let the rotating selection artwork steal the show. Her appreciation for the historic parts of the office guided her selections. “The historic wallpaper is so wonderful,” she said, as are the textures provided by the exposed brick, plaster and tin ceilings.

The renovation began in September 2015 and was completed this summer. In addition to revamping the dilapidated interior, the whole back wall of the building had to be rebuilt, Troyer said, due to its unstable condition. The roof was also replaced, and HVAC was installed. Bathrooms, which never existed in the space, were installed, and uneven floors were leveled.

On top of the functionality and gorgeous aesthetic of the renovation, there’s also room for the company to grow. “It’s a dynamic space with a truly authentic quality,” Bond said. “Wayne, Alyce and Alex were a dream team to work with to make our vision a reality.”

View a selection of photographs taken by Liz Jurey on our flickr page. 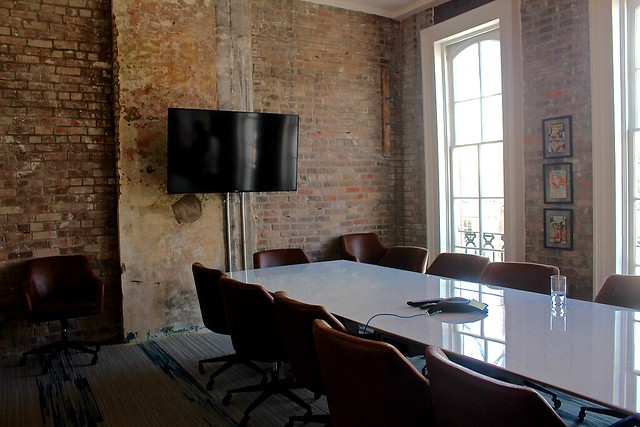