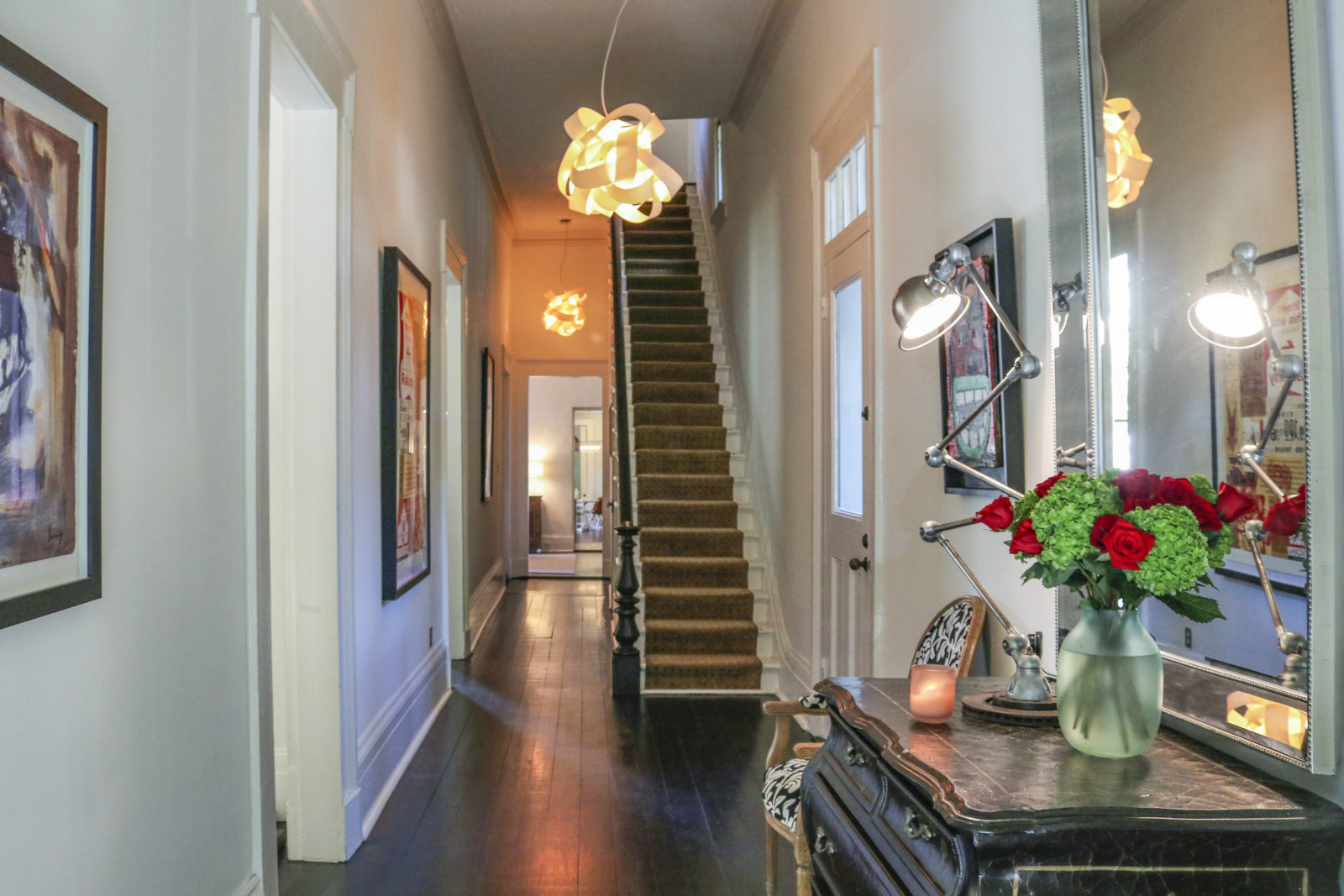 On a trip to Whole Foods one day, Jessica Bride and Nicholas Mayor took a wrong turn and ended up on Coliseum Street. It was there they found a run-down — but significant — Greek Revival, double-gallery house overlooking Coliseum Square Park. “Just on a lark, we jumped out to grab a (for-sale) flyer,” said Bride, a New Orleans native.

She and Mayor, an Englishman, intended to buy property in London. But they decided to rent there instead after calculating London’s high price-per-square-foot costs, the strength of the U.S. dollar to the British pound, and the Coliseum Street house’s recently reduced sale price.

The house dates to 1847 when Hugh Wilson bought the land — the original bill of sale was signed by Bernard de Marigny, the Registrar of Conveyances at the time — and immediately built a double-gallery townhouse of brick covered by stucco.

Its Greek Revival style can be seen in the first floor’s Doric columns and second floor’s Ionic columns that support a simple entablature punctuated by a dentil-band just beneath the cornice. The galleries’ wrought-iron railings feature Greek key and fan details, while the entry is marked by Greek shouldered architrave trim and a cornice with dentils. During the Civil War, the family lost the house to the Union Army, which housed troops there, Bride said. During the Great Depression, it became multi-family housing. Dr. Wallace H. Smith III purchased it in 1974 and converted it back into a single-family residence. Its next owner replaced all the shutters. But when Bride and Mayor found it, the house hadn’t been lived in for a decade and needed extensive work.

“Where there was history, we followed it and were true to it. And where it wasn’t, we just built a modern family house,” Mayor said. “There’s a balance between the history, the aesthetic and the practical that really works.”

“We wanted the house to be lovely but not intimidating,” Bride added. “We really built it for the house that we wanted.”

With the help of architect Danny Taylor of Koch and Wilson Architects and Berry Siegel of Bywater Woodworks Inc., the couple first renovated the original carriage house — with its distinct vergeboard — from a two-bedroom apartment into a pool and guest house.

The new open plan and relocated kitchen feature “amenities more along the lines of a hotel and less like a full apartment. As a result we use it every day,” Bride said. The four sets of restored French doors now open onto the brick patio and pool enjoyed by the couple’s three children.

Bride and Mayor lived there while undertaking the main house’s year-long renovation. It included gutting bathrooms; updating HVAC, electrical and plumbing systems; and replacing wood flooring that was beyond repair. The floors were given a dark stain to create a flow between rooms and a contrast with the neutral furnishings and off-white, re-plastered walls. After considering several possible plans, the couple let the kitchen’s long, narrow layout dictate the design done by Nordic Kitchens. A central island serves as the room’s hub, with a breakfast table at one end and cabinetry at the other. An adjacent walk-in pantry became a half-bathroom; spiral stairs were removed to create a laundry room.

“The house wouldn’t be what it is without family friend, Brooklyn-based designer Bruce McNally,” Bride said. He served as its colorist and design consultant, helping choose the exterior’s custom paint color and infusing the couple’s modern tastes into the historic interiors.

Modern touches can be seen in the matching Zeppelin chandeliers by designer Marcel Wanders — found at Design Within Reach — that unite the double parlors and in the small, round convex mirrors — typically found on vehicles — hung about two feet below the dining room’s 14-foot ceilings.

The mirrors help brighten the room, as does the shimmery wallpaper from Flavor Paper, the Kartell Louis Ghost chairs surrounding the dining table from Tara Shaw, and the acrylic-framed mirror McNally nabbed from a closing New York City shop.

He also helped commission the Thomas Jefferson silhouette by artist Skylar Fein in the den, part of the couple’s diverse art collection. It began with the triptych in the front parlor, found at Octavia Gallery’s former Magazine Street location. “We were riding our bikes past, and it just called out to us. We went in and bought it right away,” Bride said.

There are also several pieces by Raine Bedsole, now a family friend. A folk art portrait by Detroit artist Tyree Guyton hangs in the wide entry hallway, which connects the double parlors on the left with the dining room and kitchen at the end.

In the front parlor, a Clementine Hunter painting plays off a contemporary work by Dan Tague. An exterior metal sculpture by landscape architect and artist David Tureau, another family friend, can be seen through the other parlor’s floor-to-ceiling windows. “The entire project was a family affair,” Bride said.