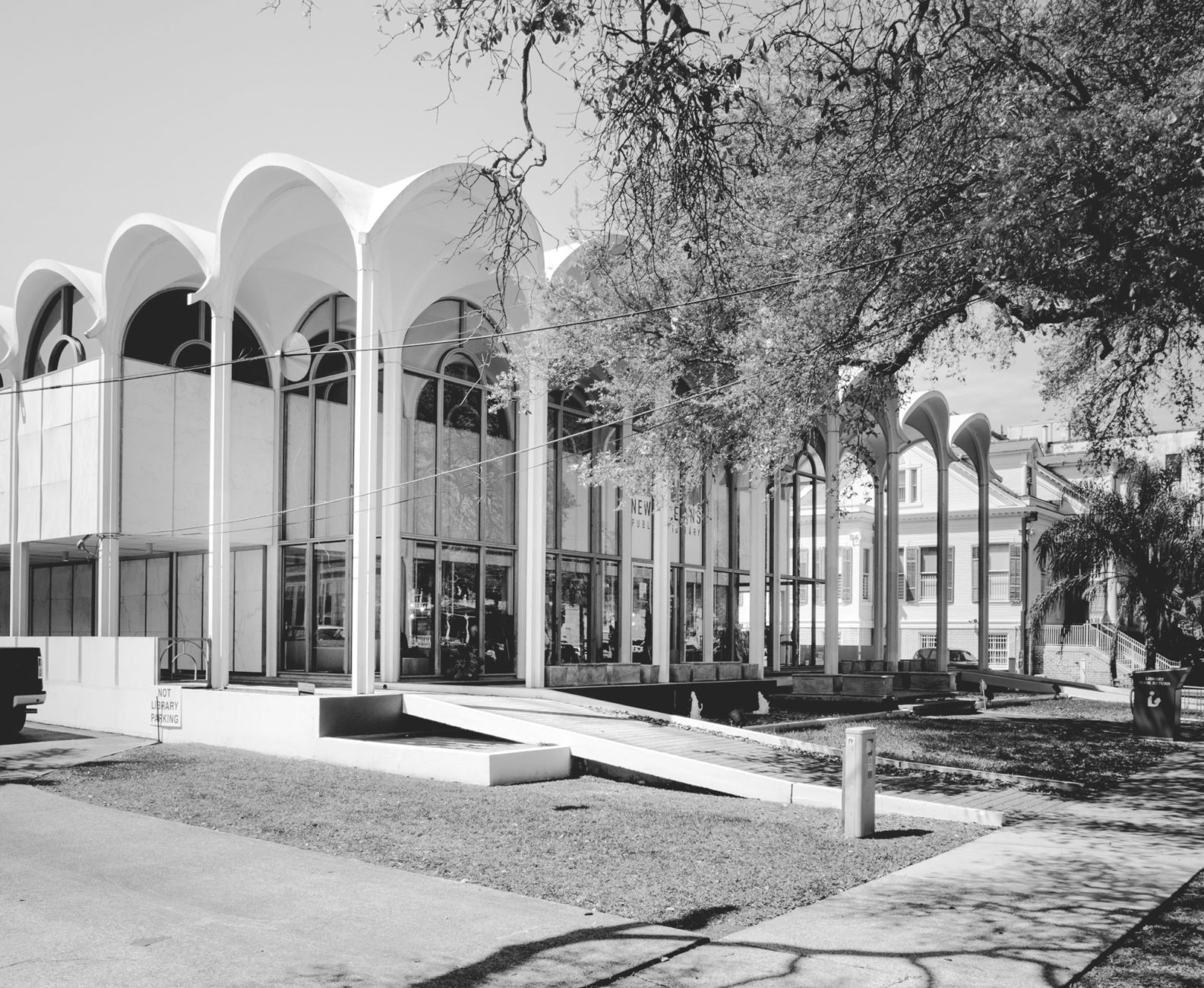 The Galatoire House is an original design by New Orleans architect Albert Ledner, completed in 1966. Located at 11 Park Island, the house is a unique blend of classic and modern influences, and was fitted with a collection of windows salvaged by Mrs. Galatoire from the Good Shepherd Convent, which was built in 1866 for delinquent girls. The repurposed windows are featured upside down among the arched windows on the front of the home as well as in the stained-glass ceiling panels. Stone is also fea-tured prominently in the home with white marble floors downstairs, and a centered, circular granite wall behind the living and dining areas. Ledner, a student of Frank Lloyd Wright, incorporated many antique and custom elements in the home, originally built for one of the descendants of owners of the famous Galatoire Restaurant. Photo: Suzanne Blaum

Standing 531-feet-tall upon its completion in 1969, Plaza Tower on Howard Avenue became the tall­est building in the state of Louisiana, exceeding the height of the Capitol building. The construction of the building began in 1964, and stalled briefly due to financial complications. Leonard Spangenberg, a student of Modernist icon Frank Lloyd Wright, designed the building.

Plaza Tower was the first local building to employ a friction-based structural foundation. This system proved successful for the unique and low-lying ground of New Orleans, where buildings of such height were previ­ously not believed to be viable. The building was originally designed for residences, office space and high-end amenities. Though few residents ever lived there, the building was renovated from 2001-2006 after lawsuits regarding exposure to hazardous materials. The current owner is developer and hotel owner Joe Jaeger Jr. To date, Plaza Tower remains the third-tallest building in New Orleans and the state of Louisiana. Photo: Wikimedia Commons

Built in 1963, the Curtis House was the original design of, and private home to, Nathaniel “Buster” Curtis, who also designed the Superdome. The private residence is listed on the National Register of Historic Places, and represents a maturation of design style from the Curtis & Davis firm. Surrounded by a high, mortared white wall, the home is located in the Audubon neighborhood. It boasts four outdoor patio-courtyards, three flat-topped pavilions and sliding glass walls that provide an abundance of natural light as well as outside accessibility.

The Mossy House on Tern Street in the Lake Vista neighborhood was constructed in 1956 and designed by Lawrence, Saunders and Calongne. The residence illustrates the unique architectural per­spective of John Lawrence (1923-1971), former Dean of the Tulane School of Architecture. As a native of Louisiana, Lawrence believed that “good modern architecture is not a set of standard forms…it is an architecture which welcomes the entire range of building materials.” Lawrence also used elements in his buildings found in traditional, local architecture and visually expanded the space by situating the building on the edge of the small, triangular lot, with a view at the time of Lake Pontchartrain through the expansive glass walls. Photo: Tulane University School of Architecture Slide Library

The Automotive Life Insurance Building, designed by Curtis & Davis, was com­pleted in 1963. The building is located at 4140 Canal St. and was originally built in celebration of the com­pany’s 25th anniversary. The structure features concrete columns, intricate vaulting, and two stories behind a street-facing wall of glass. The New Orleans Historic District Landmarks Commission selected the location as a historic landmark in 2010. It is now home to the Mid-City branch of the New Orleans Public Library. Photo: José Fernandes

Spend the sultry New Orleans summer exploring our city’s world-class Mid-Century Modern architecture with the Preservation Resource Cen­ter, the New Orleans Architecture Foundation and DOCOMOMO US/ Louisiana! The Mid Mod NOLA series will feature exciting events every two weeks from May 25 to July 20: Get a private tour of the Superdome, sip chilled wine in the home of one of New Orleans’ iconic Modernist ar­chitects, learn about our region’s architecture from experts and mix and mingle in the Black Pearl neighborhood for an exclusive block party.