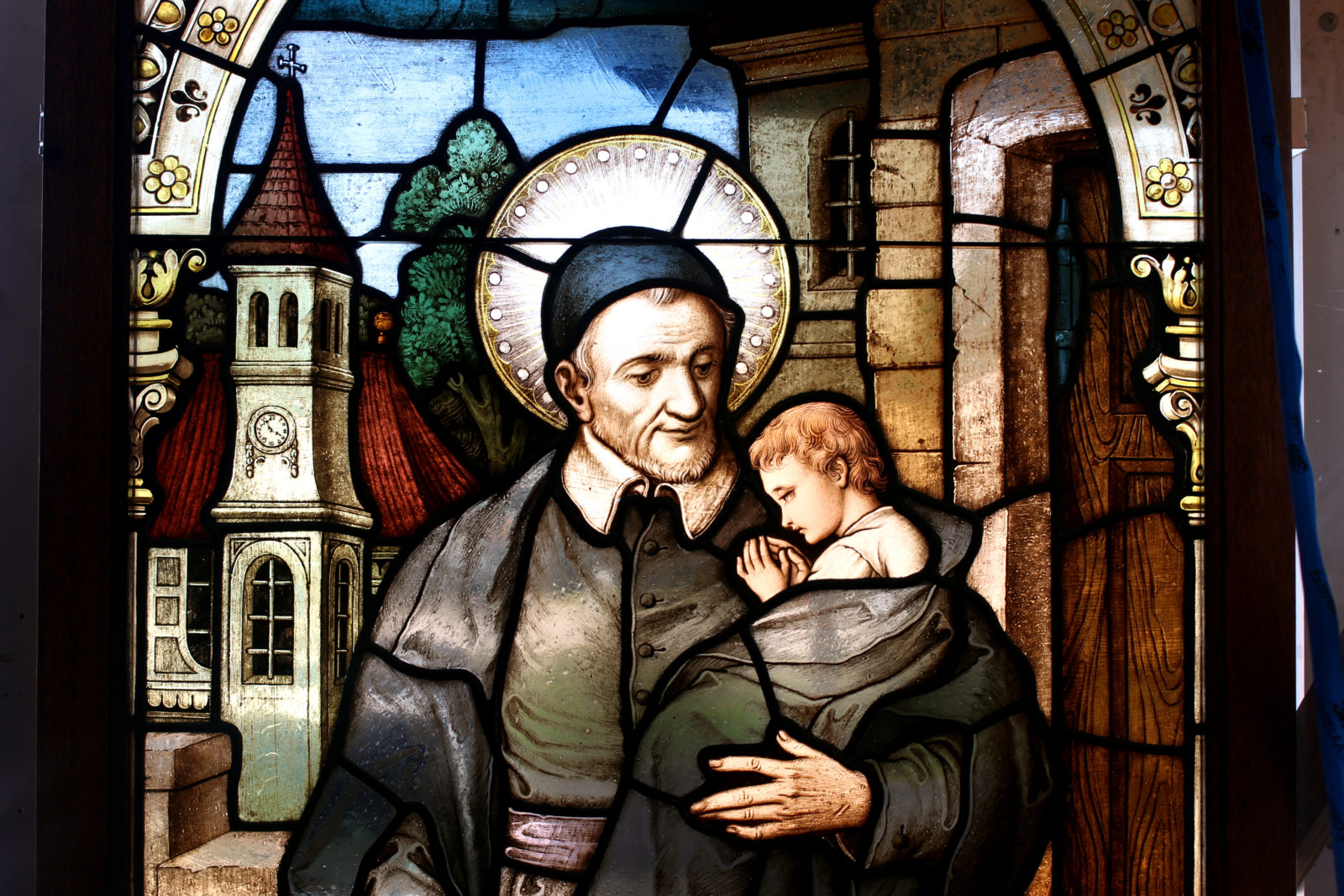 The grand churches of the New Orleans region — some of which could rival the cathedrals of Europe — are part of what makes the area unique. And if you have admired stained glass art in any of these houses of worship, chances are you have seen the work of Attenhofer’s Stained Glass Studio.

Sometimes their work involves replacement or repair of stained glass windows damaged by the elements. Sometimes, though, their expertise is needed to repair windows damaged by more sinister culprits. Their recent work at famed St. Louis Cathedral in the French Quarter’s Jackson Square is but one example: “The church was vandalized at about 6 a.m. after a protest at Jackson Square about the possible removal of the Andrew Jackson statue,” Courage said. “Two men hopped the fence, and started beating the glass.”

Unfortunately, it seems that these acts of vandalism are on the rise. “In last year, I have repaired vandalized windows at St. John the Baptist, where someone threw bricks through the painted glass; St. Louis Cathedral; First Unitarian Universalist Church, and the Salvation Army,” she said.

However, Courage and the talented artists at Attenhoffer’s are up to any challenge. The full-service art glass studio, whose mantra is, “Let us change the way you see the Light!”, is widely considered to be a preeminent source for recapturing old New Orleans charm.

Artisan Ken Attenhofer founded the stained glass studio that bears his name in the early 1970s. Over a decade later, in 1987, a stained glass aficionado named Cynthia Courage visited the studio hoping to enliven her house. “I fell in love with stained glass and was fortunate to find a small studio located very close to my home,” she said. “I knew I wanted to add beauty to my house, and I loved the idea of putting stained glass into my home to bring in light and color.”

When first visiting Attenhofer’s, Courage was convinced by Ken to take a class in stained glasswork. Despite her initial reluctance, as a mother with young kids and little free time, she immediately took to the craft. “I managed to complete most of my projects within the first two weeks or so, and that’s when Ken approached me and asked me to work for him,” Courage said. Her college bachelor’s degree was in business and marketing, but the art of stained glass called to her. “I was already employed, but he was persistent. I had a solid art background, and my passion truly was in art/design.

“Ken was also very flexible with my hours, because my children were quite young,” she continued. “He made an offer I could not refuse. I started working with him immediately and my first job was a restoration at Saint Alphonsus, which was a closed church at that point in time. We were invited in to do some stained glass repairs; I was truly mesmerized with their stained glass windows.”

Just like that, Courage was forever hooked. Over the next 15 years, she worked closely with Attenhofer. “I worked on dozens and dozens of historical churches at all kinds of elevations while working with Ken,” she said. “I took advantage of every opportunity I had to learn more about historical glass and conservation of glass, and looked forward to the next challenge.

“Working with Ken was always an adventure. I always knew that somehow, together, we would figure out the next challenge. Ken was very good with his technical ability, which caused him to almost never say ‘no.’ He always encouraged me and would nurture my artistic ability by constantly stating how wonderful or how beautiful a project turned out.”

After the pair had been working together for over a decade, Attenhofer began to reevaluate his ownership of the company. He believed that the time had come for him to move on from the Crescent City and Attenhofer’s Stained Glass Studio, Courage said. “We had to figure out a way to negotiate a sale of the studio,” she said. “I took over running the studio in Ken’s absence in 2000, and by January of 2002 I had become the owner.”

After taking over as owner of Attenhoffer’s, Courage swiftly worked to acquire her contractor’s license, with a specialty in Artwork and Stained Glass Installation, Restoration and Renovation. Additionally, she gained professional memberships with the American Glass Guild (and served on their Board of Directors from 2016-2017), the Stained Glass Association of America and the American Institute of Conservation. Her experience and continued desire to hone her craft has made Attenhofer’s the go-to place for people in need of stained glass restoration.

This stunning window featuring St. Vincent Depaul was badly damaged in a fire. Courage and her staff worked tirelessly to bring it back to its original grandeur.

Courage’s years working with Attenhoffer to master her stained glass ability, and later as owner, solidifying how to run an in-demand business, were, in a sense, coursework leading to her ultimate test. Reviving the churches devastated by Hurricane Katrina was more than a test of talent — it was a test of will.

The shattered glass that littered the sidewalks (along with other debris) in the harrowing days that followed Aug. 29, 2005, helped paint a picture of the region so devastating that it could cast a shadow over any eternal optimist. In these glass-half-empty days, it was up to people like Cynthia Courage to pick up the pieces — literally.

One of the first churches that Courage and her Attenhofer team were able to work on was Saint Teresa of Avila, the landmark Catholic church in the Lower Garden District between Camp and Prytania streets. They also repaired, in those early days post-storm, numerous panels of paintwork at Notre Dame Seminary that were about 30 feet in the air.

But the most memorable post-Katrina project for Courage was St. Maurice Catholic Church in historic Holy Cross: “We removed the stained glass windows and were required to leave the outside of the church boarded up. The inside was totally dark and we used generators with extension cords, spotlights and scaffolding to perform our work.”

The process of collecting shards of barely salvageable stained glass, and the broken frames that once held their art firm in place, proved to be more painstakingly difficult than any other previous endeavor.

The immense work that the artists at Attenhofer’s faced was akin to dealing with an endless jigsaw puzzle. And, at the same time, many of the artists found themselves homeless as a result of the storm, living in FEMA trailers. But, as long as they continued to work they had a purpose — reviving art that would have otherwise been totally lost and forgotten.

Unlike most artists, much of the staff’s work at Attenhofer’s is not about individual creation, but about trying to connect spiritually with a former artist in an attempt to recapture their magic. The key to stained glass restoration is to realize that you are becoming part of its life, as your hands were not the first to touch its glaze, and most likely won’t be the last, Courage said.

The art lies within trying to shape frames to the specification of the original, and matching shards of glass from years gone by to a color of today. “The goal is to keep as much of the original as you can,” Courage said.

“You have to honor the work of those before you, the forgotten craftspeople,” she said in previous interview. “I’m very respectful. I feel I’ve been put here as a caretaker.” Courage’s team was commissioned to work outside New Orleans, as well, in towns along the Gulf Coast during Katrina recovery efforts.

Twelve years after the storm, Courage said that she is still working on post-Katrina related projects. “I think the recovery mode of the Katrina days is a mode that I fit into easily. It’s the kind of mode that you’re cleaning up, beautifying, and making things better, that worked for me. I still enjoy creating beautiful pieces filled with color and allowing the light to dance. I remain optimistic, and have seen the birth of three new churches in the past few years. We worked in all of them and were rewarded with their openings.”

One of these new churches for which Attenhofer’s created new stained glass windows is Covington’s Most Holy Trinity Catholic Church. Many of its parishioners actually relocated to the area following the flooding of St. Bernard Parish. “We worked on this project for a three-year span, and then we witnessed the birth of Most Holy Trinity. It was a splendid day when they dedicated that church. It was overwhelming to see all of those families finally have their new home,” she said.

The only full piece of glass that Attenhofer’s employees were able to salvage from the back of St. Louis Cathedral after it was recently vandalized.

Cynthia Courage and the artisans at Attenhofer’s have not wavered from their station as the caretakers of the stained glass windows found adorning the churches of the New Orleans region. These glass restorers, whom often are working on depictions of scenes from the Bible or religious symbolism, know their work holds more than just beauty. Their art brings wisdom and hope as the New Orleans’ sun beams through their emblematic panels.

But these visions first brought to the city centuries ago are not limited to cathedrals. Countless Victorian-style mansions in the Garden District and other neighborhoods have original stained glass art. Moreover, the neighborhood of Mid-City bears a considerable amount of stained glass windows — though these tend to feature modern twists on the art.

Today, many homebuyers are rediscovering the allure of these character-driven windows. “New Orleanians have a love for their historical glass, but if they were not fortunate enough to have it in their home already, many seem willing to add some newly designed art glass,” Courage said. “Some of our clients want something fresh and dramatic, while others prefer the historic look or beveled glass.”

As she approaches two decades of owning Attenhofer’s, Courage and her crew continue their meticulous work, in homes, churches and beyond. As Courage says, “Keep the craft alive!”