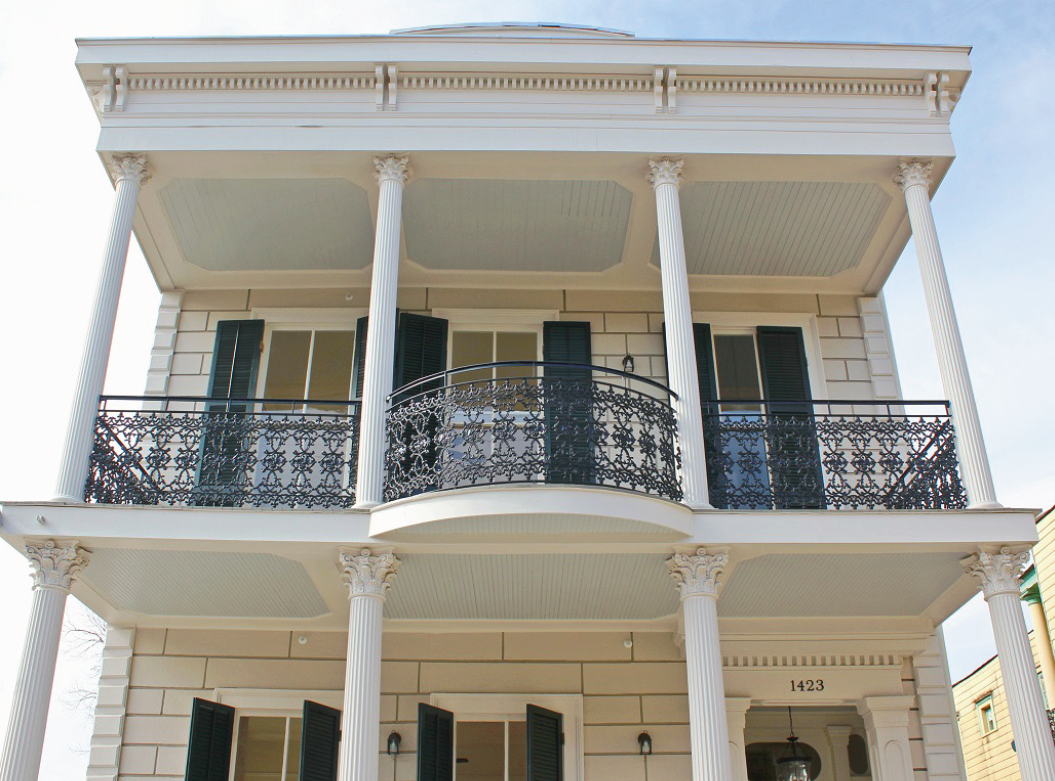 The 2018 Louisiana Landmarks Society Awards for Excellence in Historic Preservation honors 22 exceptional projects in New Orleans. These awards honor projects completed in Orleans Parish in 2017, which represent outstanding examples of restoration or rehabilitation of historic buildings and new construction. Of particular interest were projects which:

The awards will be presented and celebrated at a program and reception at The Jung Hotel and Residences, on Wednesday, April 25 at 5:30 p.m.

The Preservation Resource Center would like to congratulate all winners of the 2018 Louisiana Landmarks Society Awards for Excellence in Historic Preservation!

This severely deteriorated row of two-bay, 19th-century buildings were longtime contributors to neighborhood blight. Their accurate restoration in appearance and planned use as 10 affordable housing units preserved a majority of original forms and material, including the floor plans. Remarkably, a large percentage of the original fabric includ­ing windows, cypress siding, chimneys and mantels were salvaged and reused in this honored restoration project.

Located in the Irish Chanel Local Historic District, this circa 1895 Queen Anne-style two-story structure had lost its wrap-around gallery, and was in a state of severe disrepair. Owner Nick Conner, whose company spe­cializes in historically accurate millwork, self-performed the duties as contractor and craftsman for the restora­tion. Today this commercial building, converted into residential units, adds new vitality to its neighborhood.

Located in the heart of the historic Marigny neighborhood, this 19th-century commercial/residential building underwent severe damage from fire and termites in recent years. Last year, the building was revitalized and restored back to its former character. All original components were salvaged and reinstalled or reproduced in exact detail. Most significantly, the documented wrap-around gallery was reconstructed on both elevations, contributing greatly to the ambience of the streetscape.

This once blighted late Greek Revival-style house proved to have more history than the team realized going into the project. The house faced demolition when the PRC acquired it in 2009. Subsequent research revealed that this is the last remaining building associated with Straight University, one of the first African-American universities in Louisiana. It is now is revitalized for residential use.

Repeatedly cited for demolition by neglect and listed on the Louisiana Landmarks Society’s 2011 New Orleans’ Nine Most Endangered Sites, the double-pen 1857 bakery, office and residence has been creatively rescued from destruction. In 2015, then City Councilmember LaToya Cantrell backed the Historic District Landmark Commission’s denial of a demolition request. In the same year new owners rehabilitated the property using historic tax credits to house a commercial office spanning across both structures’ second floors, with residential units on the ground floors below.

Recognizing the historic significance and appeal of this narrow, two-story residence, which was severely dam­aged by Hurricane Katrina, its owner wanted to renovate the property to honor its history. Using residential state historic tax credits, the team restored the house to its appropriate 1890s exterior with an up-to-date interior. The collapsed façade gallery and side balcony have been appropriately restored, adding significantly to the streetscape.

Located on the corner of Dumaine and Dauphine streets, the existing complex, which in 1949 replaced earlier structures, today is deemed a fine example of the mid-20th century French Quarter Revival style, recognized as contributory to the Vieux Carré National Register District. In this rehabilitation for resi­dential use, the development team retained historic millwork, glazed block walls and corridor configura­tions while adding a rooftop apartment atop the convent wing.

Built in 1896, this is only the second building ever on the site and one of Algiers’ most prominent and treasured landmarks. The City of New Orleans recognized its importance by devoting scarce resources to refinishing and restoring the original masonry walls, windows, signage and courtrooms, and replacing gutters and roofing with copper and slate. This project represents another example of the city responding admirably to its stewardship of significant public buildings.

This project transformed six structures comprising the former Andrew J. Bell and Ben Franklin schools into 79 live-work housing units with ancillary uses. Geared toward low to moderate-income artists, cultural workers and their families, it encompasses two blocks, and contributes greatly toward the encouragement of continuing cultural and ethnic diversity in the Tremé. Vacant for 13 years, the site now thrives as a com­munity of engaged residents, all while meeting criteria for obtaining historic preservation tax credits.

Constructed in 1897 in the Tremé historic district, George O. Mondy Elementary had remained vacant since 2005. The current owner acquired the abandoned school in 2015 with plans for its rehabilitation into affordable apartments for seniors. The building was carefully rehabilitated as such, with significant portions of the original interiors restored and damaged elements replaced appropriately. Importantly, the caretaker’s cottage, which was targeted by the city for demolition, was included in the renovation project.

Vacant since Hurricane Katrina and owned by the City of New Orleans in 2010 when named to Louisiana Landmarks Society’s New Orleans’ Nine Most Endangered Sites, this striking 1902 Queen Anne-style structure, which housed a police jail and patrol center, was a victim of extreme neglect. In 2013, the build­ing was auctioned to the winning owners, whose plans to turn the property into a bed and breakfast were unanimously approved by the City Planning Commission in 2015.

Constructed in 1853, Holy Trinity Catholic Church was suspended from use by the Archdiocese in 1992 and was included in the 2010 list of New Orleans’ Nine Most Endangered Sites. Acquiring the site in 2011, the owners envisioned restoring the building and offering it as a resource to the community, which wel­comed the complementary use. With the exception of a new code-compliant entrance and stabilization of historic fabric, the rehabilitation project has embraced the concept of “patina of age.”

The circa 1958 Crescent City Motel numbers among several Mid-Century Modern-style motor courts constructed when Tulane Avenue served as part of U.S. Route 61. After the opening of the I-10, such icon­ic buildings became unsavory ruins, with several recently being demolished. Fortunately, this restoration converted this proto-typical example into the boutique 20-room Drifter Hotel. Through research, specifi­cally using vintage postcards, the interior and exterior have been restored to their 1950s appearance.

The restoration of the historic portions of the Jung Hotel marks a substantial investment by local develop­ers in the Upper Canal Street corridor. Designed by Weiss and Dreyfous in 1925, with additions made in 1928 and circa 1950, the skyscraper had languished since it was severely damaged by Hurricane Katrina. The redevelopment includes 175 multi-family residential units, 145 extended-stay hotel rooms, a parking garage and 42,280 square feet of commercial retail space.

This 1949 building, designed by Curtis and Davis for the Klein Motors Automobile Dealership now serves as the new home of the New Orleans Advocate. The renovation restored its original appearance, most notably the undulating canopy and angled glass storefront. The lobby is connected to the second floor by a new feature, a 20-foot high spiral staircase that overlooks the lobby and the newsroom.

This imposing Neo-classical style building, designed in 1927 by the firm of Favrot & Livaudais, for de­cades housed New Orleans Public Service, Inc. This honored renovation transformed the grand space for new use as part of a 217-room hotel, carefully polishing its old-world elegance. The project also includes the Dryades sub-station, a former savings and loans bank next door as well as a corner parking lot.

Obscured by metal sheathing for many years, the Pythian Temple was constructed by the Colored Knights of Pythias in 1909 to bring African-American enterprises to the back of town. This transformative resto­ration removed the sheathing and placed the landmark back in the spotlight. Housing 69 mixed-income apartments, the Pythian Market, an event space and offices, the building utilized historic tax credits and is LEED certified silver.

Residents of Faubourg Marigny and adjacent areas celebrated the rebirth of Schwegmann Brothers’ Giant Supermarket Number 1 as a Robert Fresh Market. Listed individually on the National Register in 2014, this iconic landmark, shuttered since Hurricane Katrina, was revitalized using historic tax credits. The goal of blending with and contributing to its historic 19th and early 20th-century neighborhood guided all aspects of the rehabilitation.

Located in the heart of Faubourg Marigny, these circa 1844 masonry townhouses figured as a part of the vast holdings of Julien Adolphe Lacroix (1808-1868), a Cuban-born free-man-of-color, and his brother Francois Lacroix (1806-1876). The current owner acquired these significant properties, formerly the home of Father Flanagan’s Boys Home, and faithfully restored all salient architectural features while at­tending to the recommendations and wishes of the neighbors.

Located on the site of the burned Hubig’s Pie factory, Baker’s Row, an infill project of new construction, consists of a townhouse condominium complex of four buildings, each with two residences. The develop­ment team worked with the neighborhood, as well as seeking input from experienced advisers. A consen­sus emerged to create a modern living environment within the historical context, resulting in historically referenced façades with modern interiors and courtyards.

This new construction and rehabilitation project provided an innovative and successful approach to con­temporary infill providing 12 homes — nine new construction units and three in an existing warehouse structure. Leveraging the density allowed for multi-family development, the site is organized as single-family assemblages, in which the individual homes “fit together” in massing that respects and reflects the scale and character of its Irish Channel industrial/residential mixed neighborhood.

Emily Ford, of Oak & Laurel Cemetery Preservation, is the first recipient of this award given in memory of Mary Lou Christovich. Ford uses proper materials and artisanal techniques that serve to provide sus­tainability and responsible preservation of the components of historic cemeteries. That body of work, combined with her documentation and public education initiatives, represents a focused and effective commitment to historic preservation.