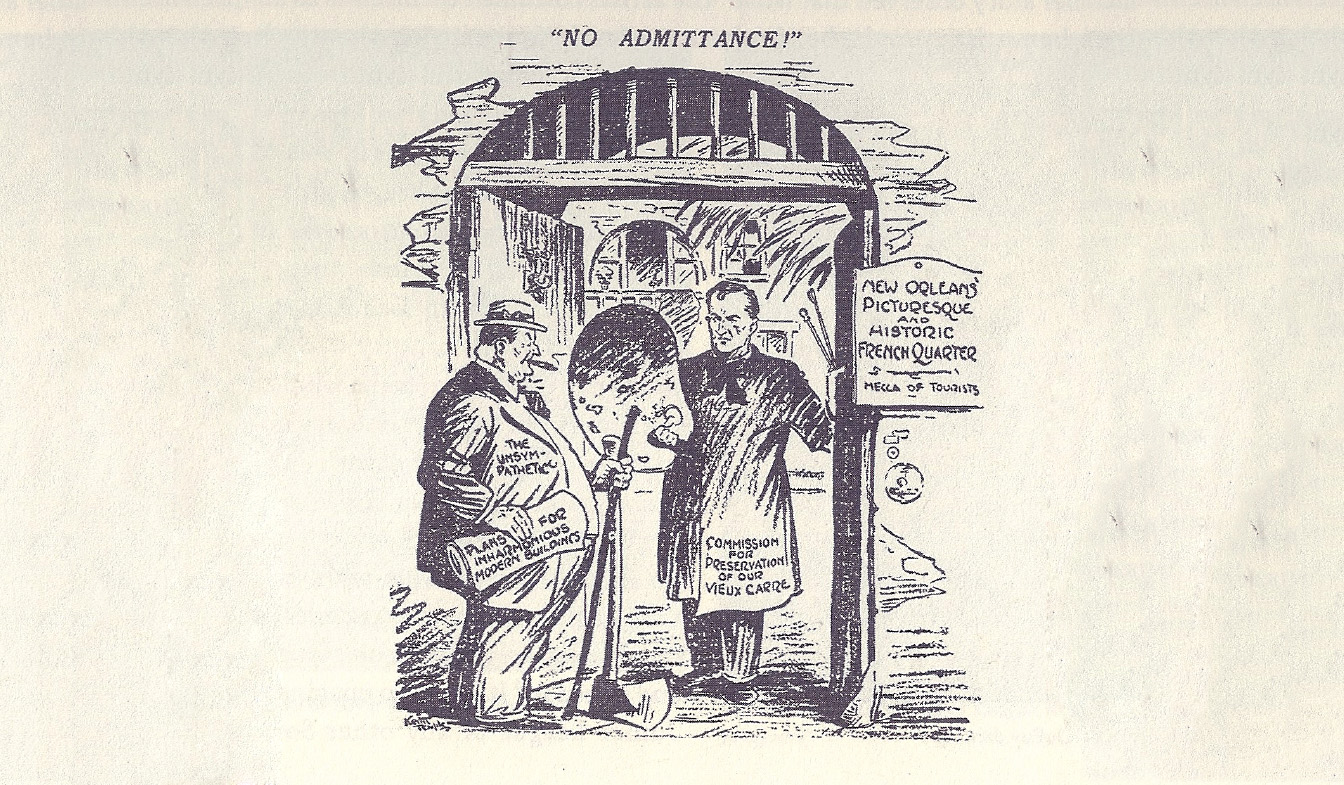 Preservation and economic development coexist in a symbiotic relationship in New Orleans. The tout ensemble represented today in our historic neighborhoods is the culmination of the work and passion of countless indi­viduals and groups that pushed for the preservation of our historic architecture.

The Vieux Carré, commonly known as the French Quarter, has always been at the forefront of the city’s preservation movement, and perhaps natu­rally so, as the original city. At the beginning of the 20th century, many of the once-grand residences of the Vieux Carré had been divided up into apart­ments and left in a state of quiet neglect and disrepair. The romantic nature of the scene was beneficial to those in pursuit of inexpensive apartments, such as im­migrant populations and artists seeking studio space. It also drew in tourists to view “The City Care Forgot, Quaint, His­toric, New Orleans,” as stated in a 1910 Washington Herald advertisement for the St. Charles Hotel.

In December of 1919, a fire destroyed the French Opera House, a city institution and cultural center for the Creole popula­tion. With its loss, came one less reason to visit the Vieux Carré — what was to be found there but faded memories of a lost time, squalor, bad roads and decaying buildings? The fear of this sentiment ral­lied local business and property owners of the Vieux Carré together, and on the eve­ning February 5, 1920, they held their first public meeting at the Hotel Montelone to put together plans of action.

These initial plans were far reaching in scope: calls to rebuild the French Op­era House, improve streets, increase the number of electric street lights, and a “general modernization of buildings, both dwellings and business premises with a liberal use of paints,” were listed in articles detailing the meeting’s proceedings. Days before the first meeting, the New Orleans States reported that the group wished to “create the right kind of conditions for the house-holder and home-owner who may prefer to reside in this charming quarter.” Also, included within the discussion of this first meeting, led by J. Earl Rogers and other businessmen of the neighborhood, was the call to protect “private homes, which reflect the architectural types of early days,” and the creation of “regulations to prevent the undue destruction of structures that ought to be preserved,” as reported by the New Orleans Item. The small group of concerned citizens tasked themselves with quite the workload. Some of these improvements would come to fruition that very year; others we continue to work on to the present day.

Beyond the outlined scope of work pre­sented at the meeting, the businessmen also had additional plans that would help for them to achieve their goals. The Quarter, neglected for years by many members of society other than their visits to the Opera House, needed to be relabeled as a fashion­able locale. To safeguard their investments, and their businesses, the men realized that further steps were necessary. Just days af­ter their inaugural meeting, Walter Valois, president of the newly christened Vieux Carré Improvement Association, promised to aid in financing a building for the United Women’s Club if they would move their clubhouse into the Vieux Carré.

The group also began writing to the Eu­ropean absentee landlords of the blighted homes within the Quarter, urging them to sell and place the properties into the hands of those capable of restoring and preserving them. They then publicly announced a call to action in the New Orleans States, at the end of February 1920, titled, “Shall Vieux Carre [sic] Live? It Is Up To Orleanians.” The article stated, “Are there in New Orleans forty or fifty men willing to act [as] god­father to fine old mansions in the French Quarter?” They didn’t find 40 or 50 men at first, but they did find one man willing and able to take on the role – the same man who anonymously purchased and then donated the French Opera House to Tulane University in 1913. That man was Virginia-born entrepreneur, banker and phi­lanthropist William Ratcliffe Irby.

The importance of Irby’s role in the protection of the Vieux Carré cannot be overstated. In answer to the plea of the Vieux Carré Improvement Associa­tion, Irby purchased the Lower Pontalba Building in the early winter of 1920. Then, in April 1921, he purchased the old parish prison, near to the cathedral, and donated it to the State Museum for use as administrative offices. Also list­ed among the buildings purchased by Irby to secure their preservation were the Seignouret-Brulator house (currently being restored by The Historic New Orleans Collection) and the Paul Morphy house (today’s Brennan’s Restau­rant). In addition, Irby financed part of the restoration of St. Louis Cathedral, after it incurred hurricane damage in 1915, with a $125,000 anonymous gift.

With the purchase of the Pontalba Buildings and a known intent to restore and develop them, other prop­erty investors began to take notice of the long forgotten architecture of the Quarter. “After half a century of neglect the Vieux Carre [sic] is awakened to its second blooming,” wrote Lyle Saxon in a June 1920 Times-Picayune article. Saxon, through his reporting on the newfound interest in the Vieux Carré, would become the unofficial spokesman of the movement by highlighting the merits of the French Quarter and advocating for its preservation. In the same article of June 1920, he went on to state, “Today there are a score of men and women, busily repairing and remodel­ing houses they have bought or leased and who will move to the Quarter, bag and baggage, in the fall. The renais­sance of the old section is actually at hand — at last.”

By the spring of 1921 the French Quarter was bustling with activity, and people were not only visiting — they were choosing to take up residence there. Most impor­tantly, however, in June of that year, an amendment to the Louisiana Constitution was added (Article XIV, Sec­tion 22A) that authorized the New Orleans City Council to create the Vieux Carré Commission (VCC). This or­dinance laid the groundwork, though the commission would not become active officially until 1925.

The spring of 1921 was also important because it was the time in which the Quartier Club relocated from their cramped location shared with the Daughters of 1776- 1812, to a newly restored corner space in the Lower Pon­talba Building. The Quartier Club functioned as a social club for society members, offering lectures, dinner dances and luncheons. The club was founded in 1919 and led by the legendary Elizebeth Werlein. A larger than life figure in New Orleans history, the then recently widowed suf­fragette leader stood at nearly six feet tall, and was argu­ably one of the most interesting women to have ever called New Orleans home. A New Orleans States article of May 1921 described her in the following terms: “Mrs. Werlein is Louisiana chairman of the League of Women Voters. She has been identified with every movement for the betterment of children and wom­en in the South in recent years. She has hunted tigers in India, shot big game in Africa, ballooned all over Europe, broken wild stallions in the steppes of Rus­sia, flown in the first plane of the Wright brothers in Paris, eaten luncheon in a submarine on the bottom of the sea, is a leader of New Orleans society and the mother of four.” Led by Werlein, Society had arrived; the Vieux Carré was once again a fashionable place to see and to be seen.

Progress continued in the Quarter, economic and real estate development was at a high. Many of the plans that the small group of businessmen put together in early 1920 had come to fruition. However, they were still only act­ing as a citizens group until 1925. With pressure from the local chapter of the American Institute of Architects and members of the women’s organization Le Petit Salon, the Commission Council of New Orleans officially created the first VCC. The initial members were Mrs. Charles M. Wogan, Mrs. Neal M. Leach, Mrs. Emile Godchaux, Ross E. Breazeale, Charles A. Desporte, John H. Bernard and Dr. Rigney D’Aunoy, with Mayor Behrman acting as ex-officio member. However, this group’s role was limited to serving merely as an advisory committee.

Frustrated by the lack of administrative power granted to the Commis­sion to protect the architectural fabric of the Vieux Carré, a small band of activists and preservation advocates pushed for legislation that would grant regulatory power to the advisory group. Elizebeth Werlein, who had relo­cated from Uptown to the French Quarter’s St. Ann Street in 1926, led the charge. Following on the heels of the founding of Charleston’s Board of Ar­chitectural Review, Act 139 of 1936 amended the Constitution of the State of Louisiana and the VCC as we know it today was formed.

Werlein was never one to shrink from a cause or abandon one that she invested in, and so when she became dissatisfied with what she viewed as a lack of law and guideline enforcement on the part of the VCC, she founded the Vieux Carré Property Owners Association in 1938 and put pressure on then-Mayor Robert Maestri to strengthen VCC regulations, and for the commission to make use of them. She acted as president of the association, now known as the Vieux Carré Property Owners, Residents and Associates (VCPORA), and noted in its charter its dedication to the “preservation, res­toration, beautification and general betterment of the Vieux Carré.”

The existence of the VCC and VCPORA represent the result of many ear­lier efforts, as well as recognition of the economic potential of the Vieux Carré. Both entities continue to protect and help shape the development of the French Quarter, preserving the tout ensemble and its distinctive charac­ter and ambiance.