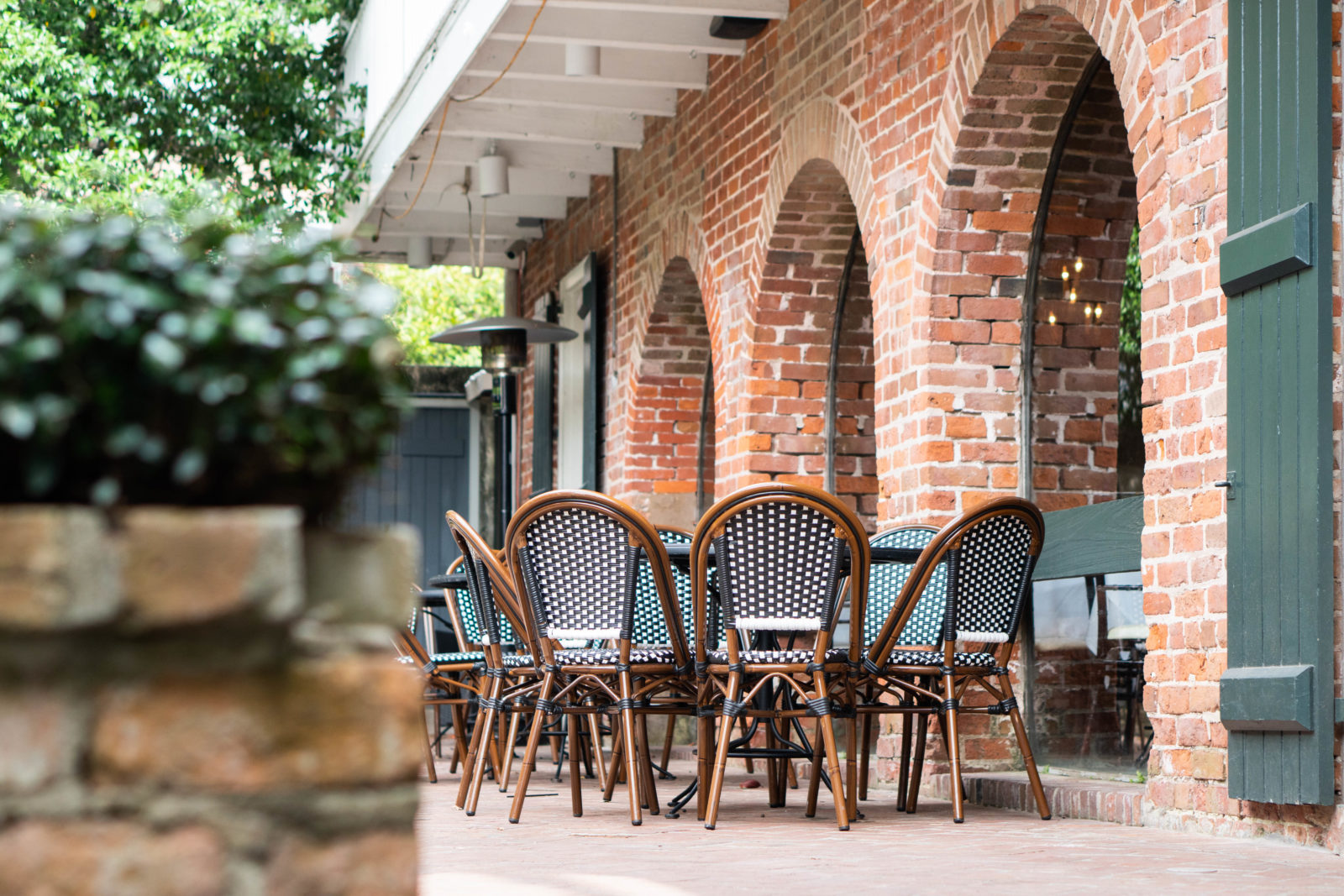 On Lundi Gras in 2013, as the city was in the throes of parades and parties, brothers Marv, Richy and Zeid Ammari were quietly writing a new chapter for one of the city’s most storied restaurants. They had put down a deposit to purchase the historic Broussard’s Restaurant and started mulling plans for it.

The brothers, who own Creole Cuisine Restaurant Concepts, a restaurant group that also includes Kingfish and the Bombay Club in the French Quarter, pondered four options: To lease the space to a third party, close and re-open as another restaurant, develop the property into condominiums, or keep it as Broussard’s.

“The best course for the community and city was to carry Broussard’s forward,” Marv Ammari said.

Since then, Creole Cuisine Restaurant Concepts has worked hard to incorporate modern updates while paying tribute to its rich past. This year, Broussard’s, at 819 Conti St., enters the exclusive ranks of New Orleans century-old (and older) restaurants. It was founded in 1920 by Joseph Cezaire Broussard and his wife, Rosalie Borrello Broussard. The Ammaris are only the fourth set of owners in the restaurant’s history.

Broussard’s consists of multiple buildings of different periods and ownership that were eventually linked together in the early 20th century by the restaurant’s founder. Many alterations were made over the years, and in 1974 Samuel Wilson Jr. of Koch and Wilson Architects, designer Charles Gresham and artist Charles Reinke oversaw an extensive, 26-month remodel of the buildings. 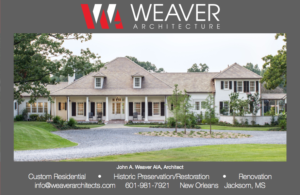 In 2013, when Creole Cuisine Restaurant Concepts bought the business, the property was in need of another renovation, including updates to electrical and mechanical systems. The Ammaris brought in Brian Bockman and Jack Forbes of Bockman Forbes Design as architects and Constance Restoration as contractors to oversee the more than $1 million remodel. The changes included the entry hall’s walls, which were brought back to the Venetian finish from the early days of the restaurant, Ammari said.

The restaurant’s Magnolia Room is located in the oldest building on the property, originally a stable for the adjacent Hermann-Grima House, which was designed by architect William Brand for Samuel Hermann in 1831. The Magnolia Room is a dining room, while the second floor is being renovated into a private dining room and event space. Broussard’s Josephine Room was built in 1876 and used as the washroom for the Hermann-Grima home. (To learn more about the fascinating history of the Hermann-Grima home, visit the historic house museum on St. Louis Street.)

A small Creole cottage once occupied the area fronting Conti Street. From 1835 to 1885, that building housed the Jefferson Academy, a boys’ school that went from primary grade to “completion of the academic course in a curriculum of English, French, writing, mathematics, geography, history, bookkeeping and fencing,” according to the Broussard’s Restaurant Cookbook, published in 1996.

In 1894, Antoine Borrello, a tailor, and his wife, Mary Ann Guarino Borrello, owned the house, living there with their children, including Rosalie. When Rosalie married Joseph Broussard at St. Louis Cathedral, the Borrellos gave the house to the newlyweds as a wedding gift.

1: The building that houses the restaurant’s Magnolia Room is the oldest on the property, originally a stable for the adjacent Hermann-Grima House, which was designed by architect William Brand for Samuel Hermann in 1831.

2: View of the courtyard, which connects via a gate to the backyard of the Hermann-Grima House.

By 1920, the couple had turned the Borrello mansion into Broussard’s, serving Creole and French food, with some influences from Rosalie’s Italian heritage. (The couple lived above the restaurant for 40 years.)

In a 1952 article in the New Orleans Item newspaper, Broussard, who had trained as a chef in Paris, claimed he invented up to 85 dishes, including chicken papillote (chicken baked with fresh mushrooms in an oiled paper bag), crepe Suzette soufflé and a variety of dishes “a la Broussard.”

“I was forced to call them ‘a la Broussard’ because I always add something to the original recipes,” Broussard said in another New Orleans Item article from 1926.

Broussard was known for his dramatic French style. He was a fan of Napoleon brandy, so it was served with flourish at the end of meals. A waiter would salute the statue of Napoleon Bonaparte and ring a bell in the courtyard when an order was placed for the drink. The tradition stopped in 1966, when Broussard passed away, a little more than a month after the death of his wife, Rosalie. 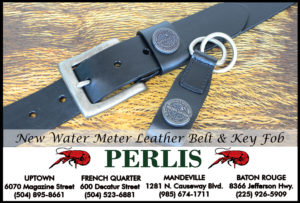 Their descendants ran the restaurant for a while, before it was purchased in 1974 by Joseph Segreto with Joseph C. Marcello and Joseph Marcello Jr. as partners. In 1984, Evelyn and Chef Gunter Preuss became part owners, and by 1993 they took over as sole owners of the restaurant. Under their leadership, Pope John Paul II was treated to meals made by chef Preuss, and in 1998, Broussard’s won the DiRoNa (Distinguished Restaurants of North America) Award for Achievement of Distinction of Dining. Only 800 restaurants in the U.S. have received the award.

Broussard’s still wins praise for its French Creole cuisine, now under the direction of Executive Chef Jimi Setchim. To mark the restaurant’s centennial, Setchim is showcasing five key ingredients in the culture of New Orleans, coffee, spice, rice, pecans and citrus, with special menus, vintage cocktails and events throughout the year. 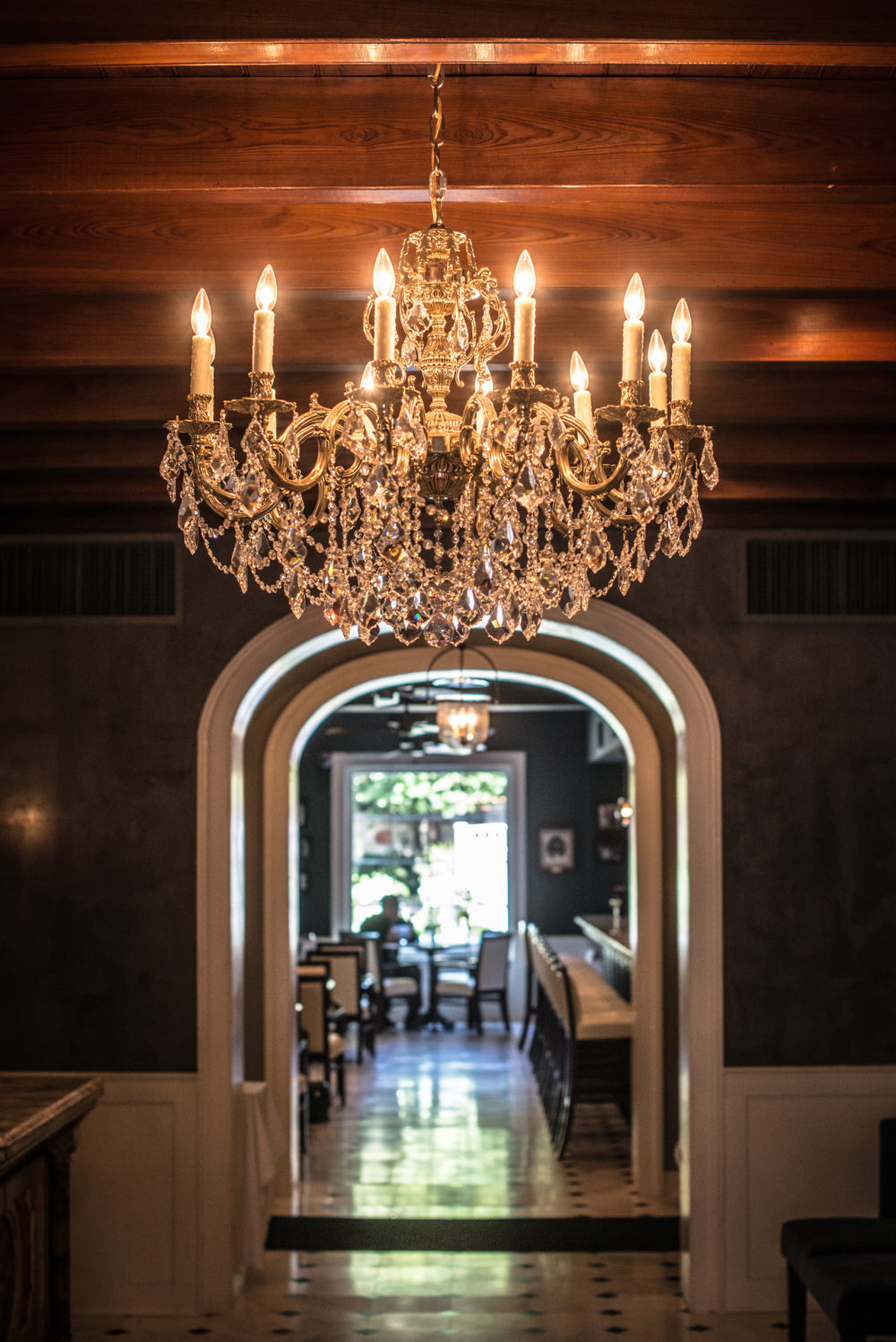 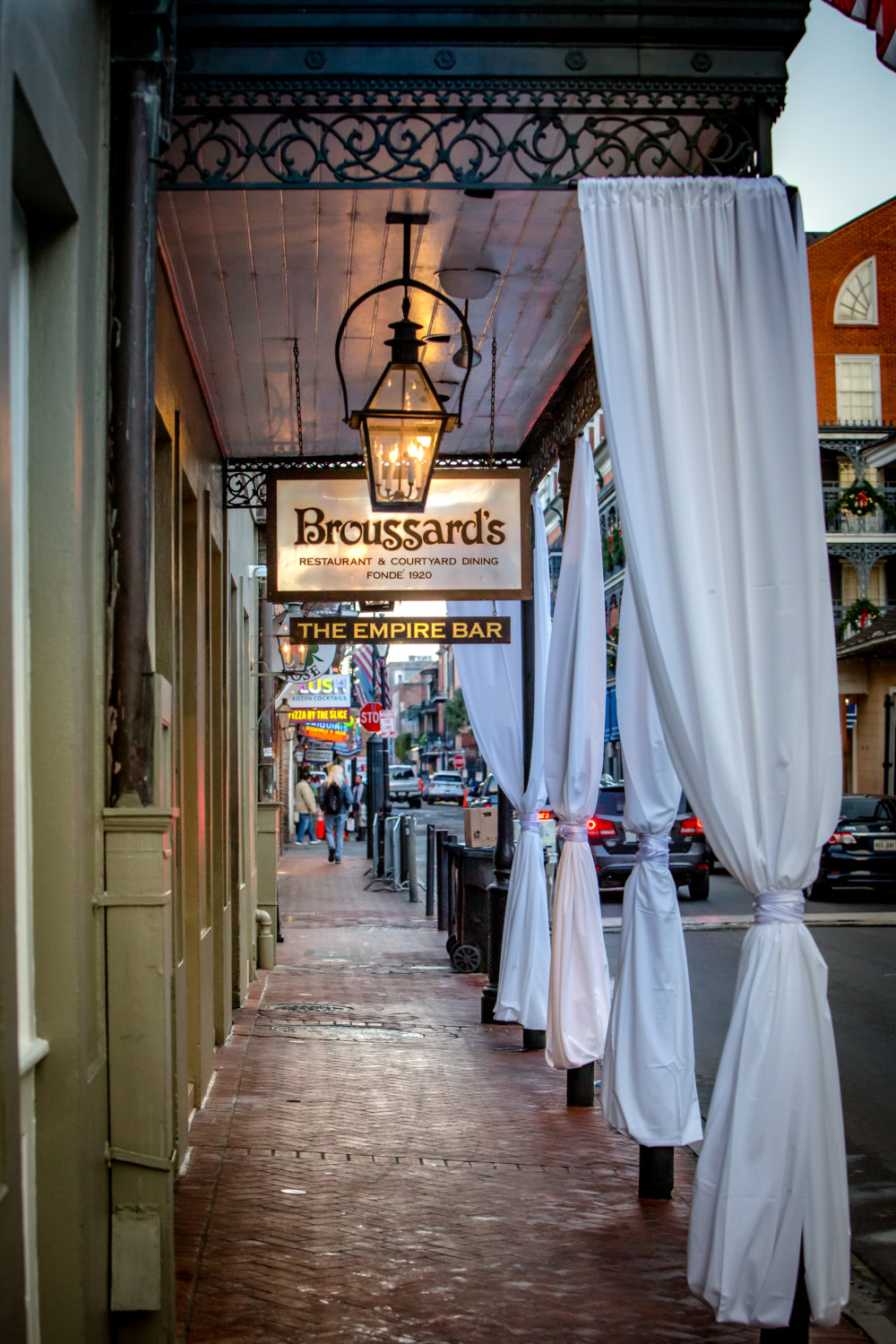 1: A view of the Empire Bar, and beyond that, the courtyard from the main entrance of Broussard’s. Photos courtesy of Broussard’s Restaurant & Courtyard
2: Broussard’s has been at 819 Conti St. since 1920, when Rosalie and Joseph Broussard opened it. 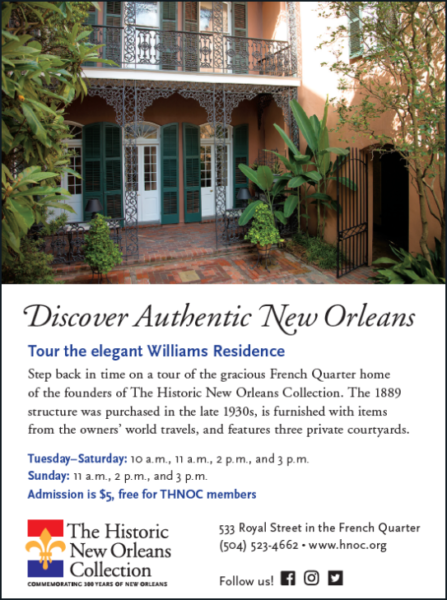 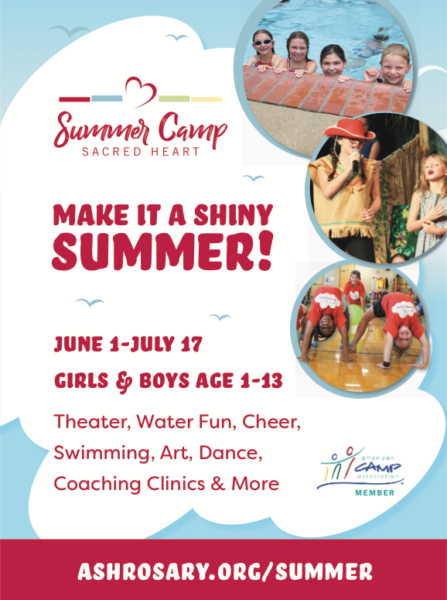