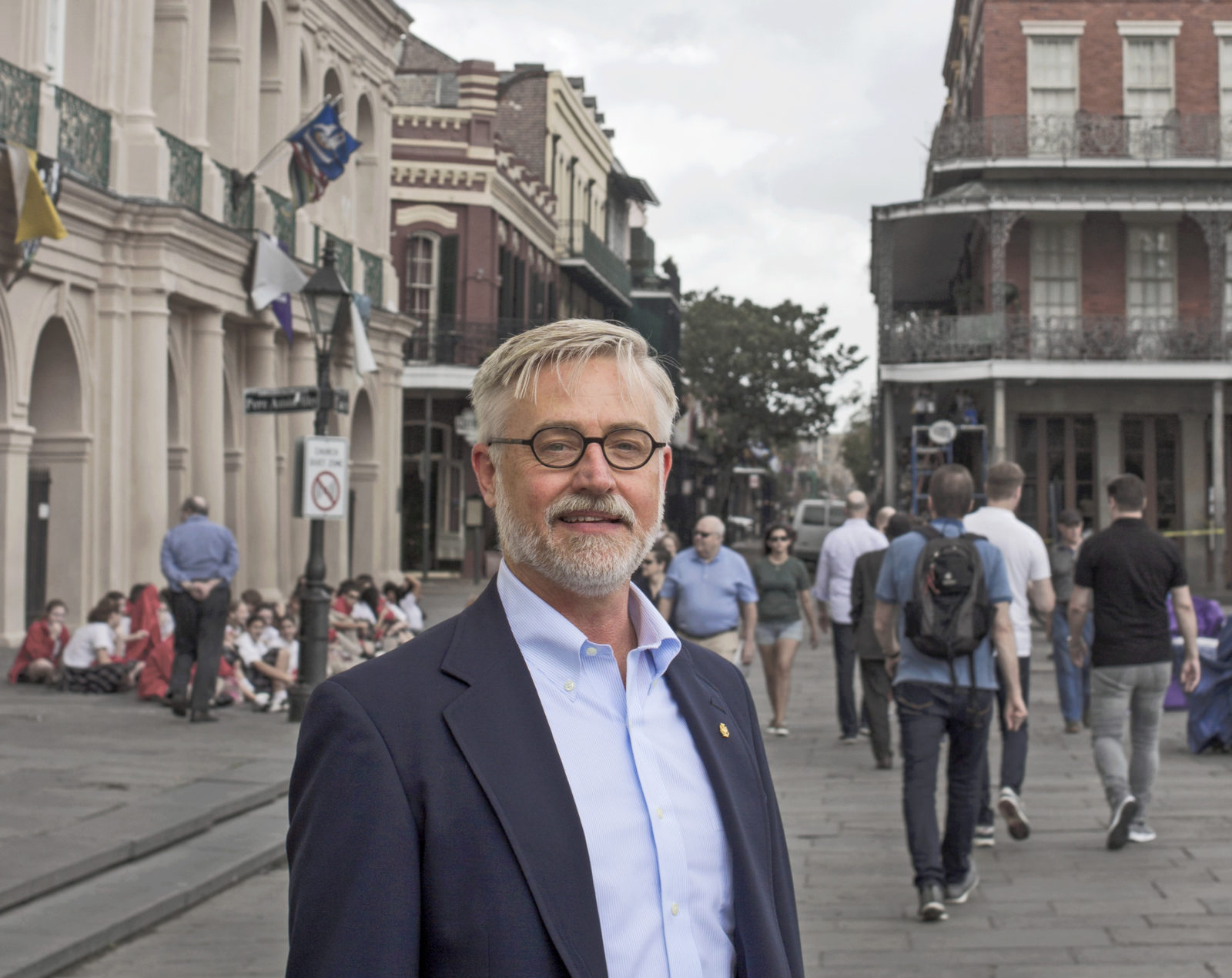 This story appeared in the March issue of the PRC’s Preservation in Print magazine. Interested in getting more preservation stories like this delivered to your door each month? Become a member of the PRC for a subscription!

Bryan Block is celebrating his second anniversary as head of the city agency that protects New Orleans’ crown jewel: the Vieux Carré, or French Quarter. He came to leadership at the Vieux Carré Commission (VCC) after years at the Historic District Landmarks Commission (HDLC), and a whole career before that as a preser­vation architect. In between his independent architecture practice and joining the ranks at City Hall, Block got experience in historic preservation in an unexpected way: as an innkeeper.

He and his partner Jeff Keller purchased two large, high-style build­ings that “needed some TLC,” he said, and turned both into highly successful B&Bs. The first, located on Carrollton Avenue, was a resi­dence designed by Thomas Sully; the second, known as the Block- Keller House, was a raised, center hall beauty on the Canal Streetcar line. Before he sold each, Block had the buildings landmarked with the HDLC. That process got Block familiar with permitting within City Hall for historic buildings — an experience that proved important as a staff person with the HDLC, and later as head of the VCC. “It’s im­portant that I understand the permitting process from the architect and business owner’s perspective,” he said. “It can be daunting if you don’t know processes, and I have worked to encourage our staff to take that perspective and work with applicants to understand issues from their point of view. This streamlines processes and makes them more transparent, and makes them as predictable as possible.”

The Vieux Carré Commission is known by many as having the strict­est property regulations of any historic district in the city — it’s the only district to regulate paint color — but in Block’s mind, the regulations are an important guarantee for investors of the precious real estate in the 0.66-square-mile historic district. “The VCC guidelines provide pre­dictability,” he said. “If an investor comes into the Quarter — be it a busi­ness owner, or an apartment tenant — they can see the guidelines and know easily that their investment is protected for longevity. The building next to them isn’t suddenly going to be torn down, for example.”

“Most people who invest in a historic district do it because of its his­toric value,” he continued. “The French Quarter is iconic; it’s attractive to an investor’s client base, and perhaps attractive to them aesthetically. The VCC guidelines serve to protect their investment, and we feel this is a value to them. But these guidelines don’t intend to rigidly keep the French Quarter preserved in amber — we understand this is 2018 and there are contemporary needs — buildings have air conditioning now, and other needs for modern mechanical equipment. The guidelines continue to adjust, and modern life continues in district.”

“And anyway, it’s not that the VCC guidelines are so strict — they just encompass more,” Block said. “We do regulate paint colors, but our guidelines are pretty similar to those of other historic districts,” Block said. The difference is that, in the French Quarter, the entire historic envelope of a building is regulated, not just what can be seen from the public right of way, as in other historic districts. “The in­tegrity of this tiny little district is so vital, and the elements of the architecture include things like courtyards, which is an extremely important element of this vernacular architecture. If we had no say over courtyards, developers could decided they’re just undeveloped real estate — and courtyards would disappear.”

“We’re here to protect the fragile historic fabric, not for use by just this generation, but hopefully for many to come,” he said.

Block coordinates staff who depart City Hall several times every day to traverse the French Quarter to keep watch on buildings and talk with neighbors. “I’m really proud of our staff in that we have been able to work more effectively as outreach officers,” he said. “We are working as a resource, and not just a regulatory agency.” Last year, for example, residents had concerns about safety in the district. “One issue perceived lack of illumination, so we did an ex­haustive study of current lighting conditions in the French Quarter.” The staff published their findings and created handouts for residents that explained ways they could better illuminate their own property in accordance with VCC guidelines. “Many residents installed new lights,” Block said, “and neighborhood safety has improved.”

“The Vieux Carré is improving — there is a lot of beautification going on, a lot of new construction, and people responding to cita­tions and getting things fixed,” he said. “The Vieux Carré is going to be a showcase for New Orleans’ tricentennial.”