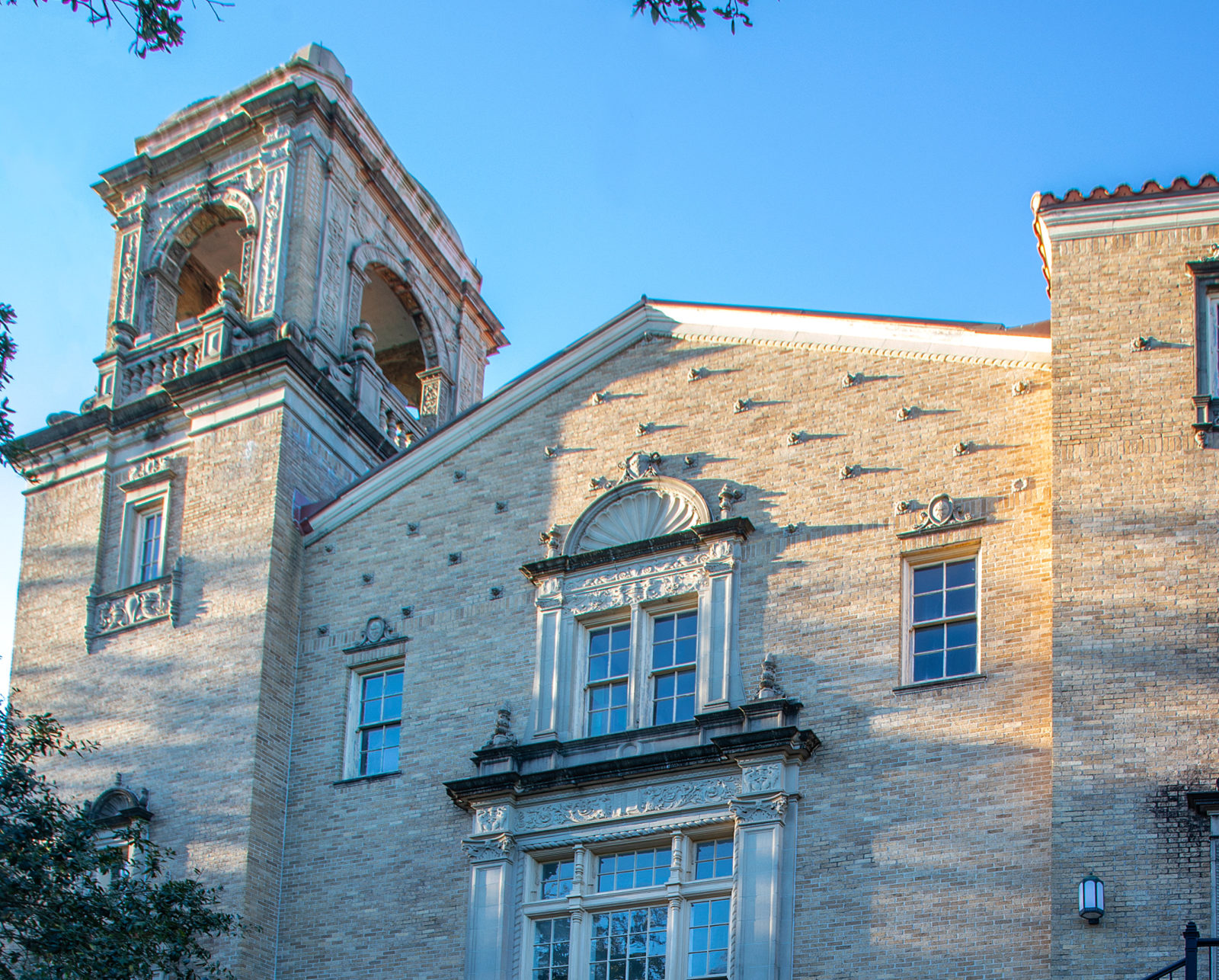 Its presence on St. Charles Avenue is commanding, with a tall bell tower and Spanish Colonial Revival-style ornamentation unlike any other church in New Orleans’ steeple-dotted skyline. Mostly unseen from the street, however, are serious water issues that are deteriorating the large, 95-year-old sanctuary.

The problems have become increasingly challenging for the church’s modest-sized congregation to handle. Now, thanks to a grant from the National Fund for Sacred Places, St. Charles Avenue Baptist Church is getting ready to undertake a full restoration of its historic building, a project that will secure a sustainable future for the site.

Last fall, the National Fund for Sacred Places selected the church and nine other historic houses of worship across the country to receive preservation grants. The fund is a collaboration between the Partners for Sacred Places and the National Trust for Historic Preservation, providing matching grants for community-serving faith groups. Grants range from $50,000 to $250,000 and assist applicants with restoration of historic spaces to strengthen their community outreach.

Led by the Rev. Elizabeth Mangham Lott, St. Charles Avenue Baptist Church is the first congregation in Louisiana to receive a grant from the National Fund. The grant will help to pay for a renovation to secure the sanctuary’s building envelope, mitigate deterioration and water issues, restore historic wood windows and plaster walls as well as update the building’s HVAC and electrical systems. The congregation dates to the 1880s, but its current site at 7100 St. Charles Ave. is the church’s third home. The sanctuary is the oldest building at the current campus, and was designed by local architecture firm Favrot and Livaudais in 1925 with a unique Spanish Colonial Revival-style design. Intricate cast concrete bas reliefs adorn the exterior brick walls; the roof is covered in terracotta tiles; and a monumental bell tower stands tall above St. Charles Avenue.

The sanctuary sits on the second floor above an educational space — similar to the “raised basements” found in New Orleans’ residential architecture — and a pair of tall exterior staircases provides access to the street. The church’s first services were held in the building in 1926.

Many of the building’s original details also remain intact inside the sanctuary, including ornate plaster castings, light fixtures, tile floors and wood pews. A cantilevered balcony wraps around the room, and arched wooden sash windows bring ample light into the space. The spacious sanctuary was designed larger than the congregation to service the nearby universities.

The congregation has been a faithful steward of the historic building, but keeping up with the maintenance needs of the aging 95-year-old sanctuary — designed to seat nearly 1,000 people — has been challenging for a congregation of approximately 100 regular churchgoers. In 2016, Cypress Building Conservation prepared a plan to help the church prioritize maintenance efforts. The plan identified roof issues, plaster failure, downspout joints and window deterioration — all directly tied to water intrusion — as the highest priority issues. The Cypress team also restored one of the arched wooden windows in 2016, and the rest will soon be meticulously restored.

At the top of the building’s crowning bell tower, a deteriorated roof membrane and flashing were causing rainwater to leak into the building. Directly beneath the leak, the stairwell inside the tower has significant deterioration from water intrusion, including failing plaster and brick efflorescence.

Water isn’t just getting inside the building from above, though. Heavy rains caused unexpected flooding on the building’s first floor in 2017 and again in 2019, bringing a renewed sense of urgency to the project.

“Water is tricky in New Orleans; we’re all dealing with it,” Lott said. “It’s the conversation everyone is having about learning to live with water.” 1: A leak in the bell tower caused plaster failure and brick efflorescence inside the church. The grant will help to fix issues with water intrusion and restore the historic building.

2: Cypress Building Conservation restored one of the sanctuary’s arched wooden windows in 2016, and the rest will soon be meticulously restored. Photos by Charles E. Leche.

Church leaders had previously been aware of the National Fund for Sacred Places, but needed time to prepare for the extensive application process. It wasn’t until Gianfranco Grande, vice president of the Partners for Sacred Places, held a meeting at the Preservation Resource Center to meet with local clergy that church leaders decided to apply. “Had it not been for that meeting at PRC, I don’t know that I would have the fire in me to do the work,” Lott said.

Rev. Lott’s husband, Nathan Lott – who works as PRC’s advocacy coordinator and public policy research director – lent his knowledge of historic preservation to the project, researching the church’s history and helping to put together the grant application.

After being selected as one of the grant recipients last fall, the church is in conversations with local architecture firms to put together multiple proposals and expects to move forward with a plan later this spring. The church also is leading its own capital campaign to support the matching grant, and hopes to go far beyond the minimum requirement to make the building’s restoration a financial reality as they look to the building’s future.

“There’s something about gathering in sacred space that really matters, whether you are a person of faith or not,” Rev. Lott said. “We want to continue to be a resource for the city and for the neighborhood, bringing people together for meaningful gatherings, having vital conversations, and believe that those things lead to collective impact in this city and beyond.” Last fall, the church hosted an event for Hillary and Chelsea Clinton to discuss their new book, filling every seat in the sanctuary. In the future, the church hopes to continue to be a welcoming place where events, local discussions, retreats and trainings surrounding social justice and other civic issues can take place.

“In all of our conversations, we’ve talked about how this congregation, which is historically progressive and has always been socially active, can continue into the future to have some kind of collective impact,” Rev. Lott said. “That’s when we started the St. Charles Center for Faith + Action, an interfaith nonprofit that is working at the intersection of sacred story and social justice.” The nonprofit’s first board meeting was last fall, and church leaders hope its impact will be the missional legacy of the congregation.

After the sanctuary building is restored, future plans will focus on the campus’ other two buildings, built in 1953 and 1963. The buildings house church offices, a fellowship hall, chapel, offices for the newly formed St. Charles Center, as well as space for the St. Charles Community Partners: a group of nonprofits, youth organizations, student ministry groups, therapists and other groups who lease office space from the church for below-market rent.

“If we have a vision for shared, smart, thoughtful space that is adaptive, flexible and honors not just the historic integrity of the physical building but the story of the people who created this building, then that to me is worth raising the money and doing the work to make sure this building is still here longer than I am,” Rev. Lott said.

Designed by Favrot and Livaudais in 1925, the Spanish Colonial Revival-style sanctuary can seat nearly 1,000 people and retains many of its original features. After the restoration, church leaders hope the sanctuary can continue to be a welcoming space for meaningful community gatherings and conversations. Photos by Charles E. Leche.